An address NOT needed...especially by those going off to war
By: Diane Sori 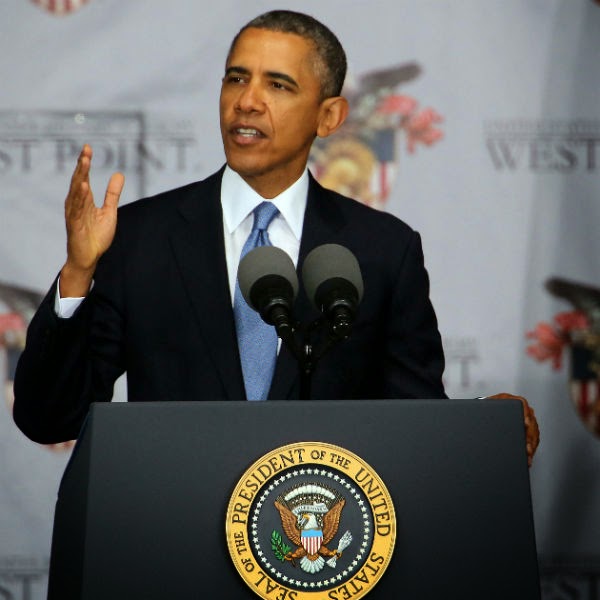 "It's your task to extend peace and prosperity."
-Barack HUSSEIN Obama to West Point graduating class of 2014

NO it is NOT. That task falls squarely on the shoulders of the President of the United States and while Obama might hold that title...or should I say he usurped that title...he is but a sham of a president.

And so Barack HUSSEIN Obama sashayed into West Point on Wednesday to give the Commencement Address to this year's graduates. And while as president and Commander-in-Chief he has every right to give this address, as the man who defames and dishonors our military every chance he gets he had NO business being there. 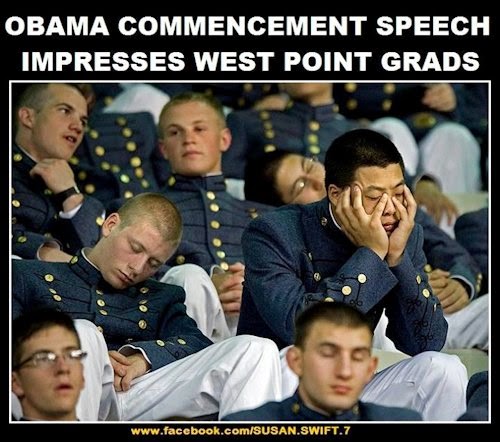 Rattling off uninspiring boring words that first spoke as usual about his narcissistic self and his 'supposed' accomplishments, then carefully choosing words to mask the very radical changes he's made to our military...including making our military caretakers of the ridiculousness of non-existent climate change...Obama's address was devoid of much needed and wanted strategic goals thus rendering it shameful at best. Proving once again that he is continuing on with his failed foreign policy agenda of hand-picking conflicts for America to get involved in... foreign policies based solely on what's paramount to political expediency for he and his party...as well as policies that pander to a carefully chosen block of voters tired of spending our dollars on war instead of on them...this most shameful of presidents has once again defamed our brave warriors by alluding instead to a loss of U.S. credibility and respect in the eyes of the world.

Playing for the cameras as he spewed his empty words that so lacked passion of the heart that “America must always lead on the world stage” but that America would use its military might only at times when its “core interests” were under threat, this address was full of platitudes and excuses, and was received with an oh-so-cool reception and rightly so as its now come to light that among all those serving in our military a mere 32% approve of his job as Commander-in-Chief. And how can our armed forces be successfully led into war when the leader in charge is NOT respected...simply...they cannot. And when that Commander-in-Chief is also embroiled in scandal after scandal...including a scandal directly related to those who wear our country's uniform...being respected overseas takes a back seat to a lack of respect here at home. 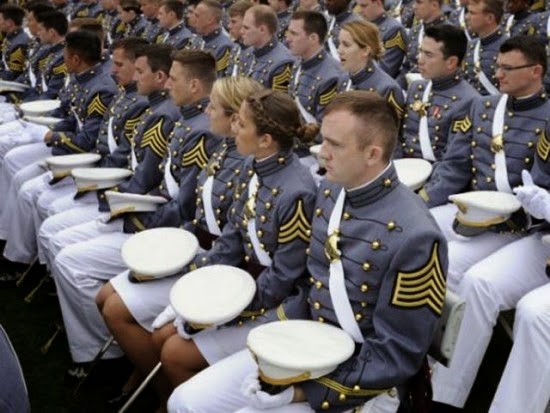 And this address was also full of silent mockery as it was NOT an address any Commander-in-Chief should ever have given to Army cadets about to be dispatched around the world... especially with those cadets encompassing many heading off to war. And ignoring the fact that leadership...strong determined and focused leadership...is needed now more than ever...this man stood before our nations next generation of military leaders and told them basically that diplomacy trumps strong leadership ...that diplomacy trumps war...that our military is NOT needed unless he alone deems it necessary.

With his emphasis on diplomacy and the continuing use of (useless) sanctions, Obama blatantly told these graduating cadets that under his command America will rely less on our military force to keep peace in the world. Yet he NEVER mentions that it's his very lack of leadership and his selective use of our military (and his carefulness NOT to step on muslim toes) that translates into the world's perceived lack of American resolve and action in hot-spots ranging from Syria to Ukraine to allowing Iran to do as they so choose.

And with this address at West Point coming right after Obama's it's all about a photo-op Memorial Day weekend visit to Afghanistan...a visit solely taken in hopes of deflecting some attention off the ever expanding VA scandal and Benghazi... Obama's announcing for all to hear...for America's enemies to hear...and remember that America's enemies are NOT his enemies as Barack HUSSEIN Obama views all conflicts and wars from a muslim NOT American point of view...by giving the date for our final troop withdrawal from the Afghan theater...a bulls eye has now been placed on our remaining troops.

And this being reminiscent of a replay of Iraq in Afghanistan, that bulls eye makes it easier for the enemy...for the Taliban and al-Qaeda...to kill as many of our brave warriors as they possibly can before they swarm in and retake a country so much American blood has been shed to free...so much American treasure has been spent to free...before they swarm in as we withdraw in what Barack HUSSEIN Obama's actions...or lack thereof...he sees as a way for him to say...for him to add to his legacy...that by the end of this his second term in office that the war in Afghanistan is finally over. But what Obama has now done by announcing the date of our withdrawal is turning American victory into American surrender...as he bows yet again to his brethren's wishes.

Simply stated...and while his minions and cronies might NOT like it...this announcing of the 2015 Afghan withdrawal date...and having the gall to do so at the West Point commencement...basically sets the stage for a said enemy retake of a country we fought hard to free...and thus has Barack HUSSEIN Obama in his capacity as president committing treason by directly aiding and abetting the enemy in that retake.

And NOT a word from Congress is said...NOT a word from the media is said...and our troops will continue to die on his watch as Barack HUSSEIN Obama simply looks away.
Posted by Diane Sori at 12:01 AM