Speaking before the U(seless) N(ations) this past Wednesday, the man who thinks nothing of trampling on our Constitution had the audacity to state that the U.S. will NEVER be at war with islam. And while he might try to fool himself and his blind followers we conservatives refer to as the 'sheeple', the truth is that America is most certainly at war with islam and has been ever since that sunny day in September thirteen years ago when his brethren...his brethren...changed our beloved America forever. 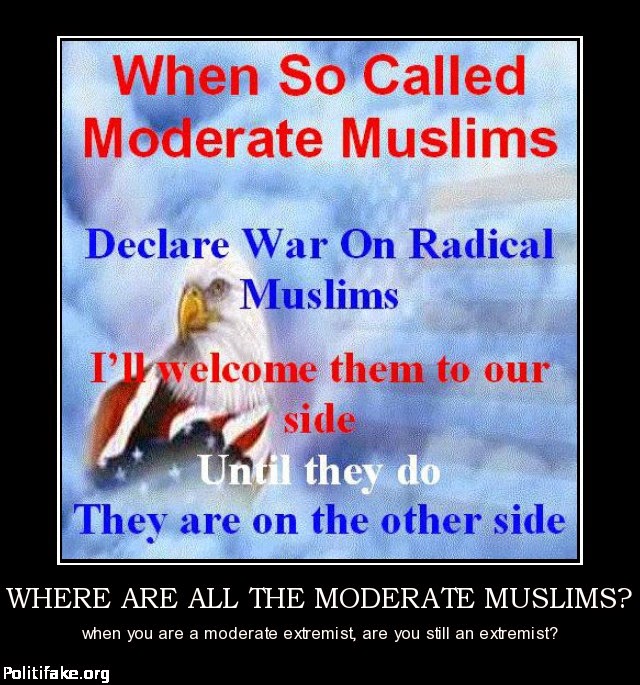 And by the way, I and countless others are still waiting all these many years for the so-called 'moderate' muslims here in this country to condemn that horrific act, but their joint silence still remains deafening to this day...as their joint silence proves the words 'moderate' and muslim are antonyms of each other.

And now in NO particular order are but some of the many highlights from a speech full of lies that was only interrupted by words of a treasonous nature.

Saying before the UN...spewing actually that, "I have made it clear that America will not base our entire foreign policy on reacting to terrorism. Rather, we have waged a focused campaign against al-Qaeda and its associated forces – taking out their leaders, and denying them the safe-havens they rely upon. At the same time, we have reaffirmed that the United States is not and never will be at war with Islam. Islam teaches peace. Muslims the world over aspire to live with dignity and a sense of justice. And when it comes to America and Islam, there is no us and them – there is only us, because millions of Muslim Americans are part of the fabric of our country," Obama is either just totally clueless or more likely doing the bidding of his islamic masters.

"...there is only us, because millions of Muslim Americans are part of the fabric of our country," Obama said. But that is NOT the truth for muslims in America are NOT willing to become part of the fabric of our American society...just ask those 'real' Americans still living in what's now known as Dearbornistan, Michigan...just ask those living in states where liberal judges have allowed the abomination known as sharia law to creep into America's judicial system.

Trying to make us believe that his words of wanting to fight what he called "the cancer of violent extremism," is for anything but political maneuvering to stop the free-fall of his current poll numbers...Obama is a fool to think we don't know that ISIS...and now the new to the forefront group known as Khorasan...ISIS' heir apparent...will become an even bigger headache to his total foreign policy failures than the Muslim Brotherhood was then and ISIS is now.

And never forget that Obama does NOT really accept ISIS or any of the other terrorist groups as a tangible threat to our homeland NO matter that some Americans who went to fight with ISIS...who went to fight with Khorasan...are now back on American soil. And please remember that Obama has been indirectly arming and training ISIS and other terrorist groups for the past two years...via the anything but 'moderate' Free Syrian Army who have direct ties to ISIS...and that he did so in his quest to take down Bashir al-Assad's secular government...a government that the Syrian people freely voted for...a government that as bad as it is, is still a hell of a lot better than any that would be in effect under the ISIS and Obama oh so-wanted islamic caliphate.

And this most vile of men went out of his way to condemn our ally Israel...in fact he went out of his way to first solidify his allegiance to Iran when he had the audacity to say that a nuclear deal with Iran is still possible."We can reach a solution that meets your energy needs while assuring the world that your program is peaceful," he said knowing damn well their program is anything but peaceful. And then this most vile of men segued right into blaming Israel for the collapse of the Israeli/Palestinian peace talks.

“The violence engulfing the region today has made too many Israelis ready to abandon the hard work of peace...that's something worthy of reflection within Israel,” Obama said...words NOT in his prepared teleprompted statement making them even more grievous as he went out of his way to say them...never mind that it was and still is Gaza-based Hamas that has been the one to break all cease-fires as well as being the one who keeps lobbing rockets into Israel.

But to the man who wears his hate for Israel and its Prime Minister Benjamin Netanyahu on this sleeve, these words should NOT have been all that unexpected.

And let's NOT forget that during his speech Obama praised controversial muslim cleric Sheikh Abdallah bin Bayyah with his words, “Look at the new Forum for Promoting Peace in Muslim Societies—Sheikh bin Bayyah described its purpose: ‘We must declare war on war, so the outcome will be peace upon peace.’” And this is beyond just spewing mere words for Barack HUSSEIN Obama openly and willingly praised a man who still endorses the terrorist group Hamas; a man who supported a 2004 fatwa that advocated violent resistance against American soldiers fighting in Iraq by saying that “resisting occupation troops” is a “duty” for all muslims; a man who in 2009 issued a fatwa “barring ‘all forms of normalization’ with Israel;” and a who man who served as the vice president of a radical Muslim Brotherhood group whose leader called for “for the death of Jews and Americans."

This is the man who Barack HUSSEIN Obama publicly praised...but I call his words spoken words of a treasonous nature for he showed his support for a man who supports and advocates the killing of American soldiers...the very men and women he, as President, is Commander-in-Chief of.

And lastly, we can't forget Obama's words spewed concerning NO American boots on the ground. "American ground troops won't be part of the fight," he said.

Outlining his plans for combating ISIS...plans of limited substance which included the now ongoing 'limited' air strikes in Syria (can't kill too many of the brethren you know); plans concerning the training and equipping of those fighting ISIS (as in his actions of training and arming the anything but 'moderate' Free Syrian Army); as well as his plans for working to cut off ISIS' financing and ability to recruit foreign fighters... Obama reiterated the words he's said so many times before...words the generals on the ground and in advisory positions say need to be reconsidered...words that "American ground troops won't be part of the fight."

"NO" Obama said...American troops will NOT be part of this fight against ISIS for having to send them back after declaring America's involvement in Iraq to be over would force Obama to admit that he and his policies had indeed lost the peace after George W. Bush's policies had won the war. And that is something that a man more concerned with his image than with re-securing the now lost peace would NEVER do...that is unless it would help raise his still falling poll numbers.

Better to send 3,000 of our troops to fight Ebola in countries that hate us as much as the islamic savages in Iraq and Syria do. Real good strategy this is NOT...especially after Obama's claim that ISIS is an immediate threat to the homeland. So, true to his traitorous nature he thinks it best to send our troops where they will make NO difference at all...except maybe to have Ebola 'cull the herd' for him...'cull the herd' of America's military best.

So here we stand "at a crosswords"...three words Obama also said...but my words after hearing his speech of lies and treasonous rhetoric make me realize all the more that this November is our last chance to render this man politically impotent from inflicting on America and the rest of the world any more damage or harm.

Click on link below to see Obama's full speech before the U(seless) N(ations).