“Islam is as dangerous in a man as rabies in a dog.”
Sir Winston Churchill

And so they came to Paris...

One by one from all over France they gathered to stand strong and united as one against terrorism...against muslim islamic terrorism.

And they came...one and a half million French men, women, and children marching through the streets of Paris (3.7 million marched across all of France)...NOT for a funeral or memorial service per se, but for a quiet and respectful act of protest and show of solidarity against the out of control political ideology known as islam.

The world's great leaders...over 50 in fact... including Britain's Prime Minister David Cameron, Germany's Chancellor Angela Merkel, and Israel's Prime Minister Benjamin Netanyahu (the man who warned the world time and again about the dangers of islam)...stood alongside French President Francois Hollande. Joined by Russian Foreign Minister Sergei Lavrov and Turkish Prime Minister Ahmet Davutoglu, they all linked arms to march together as one to show the world they stood united with the people of France...to show the world they stood united against islamic terrorism.

Even Mahmood Abbas...for Palestinian political expediency alone...and the King and Queen of Jordan...again to serve their own purposes...were there but most noticeably absent was American President Barack HUSSEIN Obama...the 'supposed' leader of the free world.

What a slap in the face and insult to NOT only the 17 murdered, but to the French people and to the other leaders of the, for now, still free world. Obama's NOT going sent a powerful message to the world of his renunciation of leadership in the 'War on Terror' and his condoning of, or in the very least his looking away from, on-going islamic terrorism. And know this snub will rightfully NOT be forgotten nor forgiven. (Article continues below video.)

And as they gathered in a cry for freedom from a nightmare of their own doing for France, like the other nations of Europe, has allowed this islamic nightmare to unfold because of their lax immigration laws. And that laxness along with their placating and appeasing these people...as in the muslims...has brought France and all of Europe to the point they are at today.

And while on Sunday they marched 'over there' here in America...an America burdened with its own immigration problems...this administration continues to purge the word islam...continues to purge the word muslim...from major U.S. government and military documents...and does so in the name of political correctness for this most miserable of presidents dares NOT step on his brethren's toes. And so Barack HUSSEIN Obama willingly looks away to the reality of the horrors being done by those whose blood also courses through his veins.

What happened in France yesterday should be happening in DC and in cities all across America today...protests drawing hundreds of thousands if NOT millions...for only in numbers...in visual tangible numbers...can change for the better be initiated...and only in numbers can the pen and the phone be removed from the hand of a vile and dangerous man run amok. 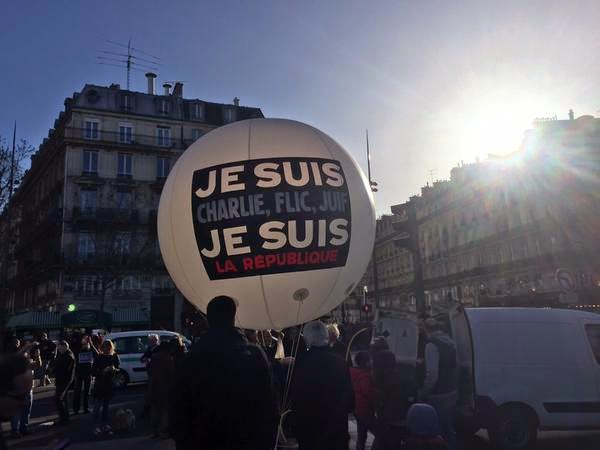 And while the unofficial slogan of Sunday’s rally could be seen on a large balloon flying over the marchers, “Je suis Charlie, flic, juif”...“I am Charlie, a cop, a Jew” (the hostages targeted and killed were all French Jews)...Prime Minister Benjamin Netanyahu rightfully took a front row position in the march of world leaders and did so just as French law enforcement officers were told to erase their social media presence and to carry their weapons at all times because word reached French government officials that terror sleeper cells have been activated throughout France over the last 24-hours. And this in turn led to 90,000 French army soldiers being deployed to search for possible attackers.

And yet some NO matter this warning...NO matter this French military deployment ...NO matter the horrific events at Charlie Hebdo...many in the West still believe that we are NOT at war with islam but only at war with radical islam. And to that I say it's way passed time that people wake-up to the reality and accept as fact that we indeed are at war with islam...the one and only entity known as islam...and that we have been since a sunny day back in September of 2001.

So as we in the West continue to fight the on-going 'War on Terror,' remember that there is NO real strategy in place to win that war, and this alone has allowed the islamists the ability to grow stronger and bolder in the methodology they use to achieve their goal of establishing a worldwide caliphate ruled by sharia law. And we in the non-muslim world need to understand...to really understand and accept as truth...that when muslims say they will do 'something' to avenge what they perceive as the West's dishonoring of their prophet muhammed...and know that threats against we infidels are made on a daily basis...they will indeed do it. And know that the days of saying that NOT all muslims are terrorists is over for if you do NOT condemn you do indeed condone...and when was the last time you heard muslim voices uniting in loud and clear condemnation of acts of jihad...of act of terrorism.

The simple fact is you have NOT except for a lone voice here and there. But now one of those lone voices...and a very powerful voice...has broken that silence as just mere weeks ago while speaking before islamic authorities from the Awqaf Ministry and Al Azhar University as they celebrated the birth of islam’s prophet muhammed, Egyptian President Abdel Fattah al-Sisi, a practicing muslim, spoke the truth about the islamic world’s relationship with the rest of the world. Daring to say that islam needs reformation if it is to continue to exist in today's 21st century world, al-Sisi spoke these words knowing that many political leaders here in the West still believe that islamic terrorism is anything but a representation of islam itself. Yet al-Sisi knows the truth that the two are indeed one and the same for he knows well that it's many of the words within the qur'an itself, along with its many out-dated ideas, that muslims hold sacred... that muslims have ritualized with unyielding unbending devotion...that are arousing NOT only the rightful ire of the Western world, but are arousing the rightful ire of any and all those NOT in the muslim world as well.

“It’s inconceivable that the thinking that we hold most sacred should cause the entire umma [Islamic world] to be a source of anxiety, danger, killing and destruction for the rest of the world.  Impossible!,” al-Sisi said. 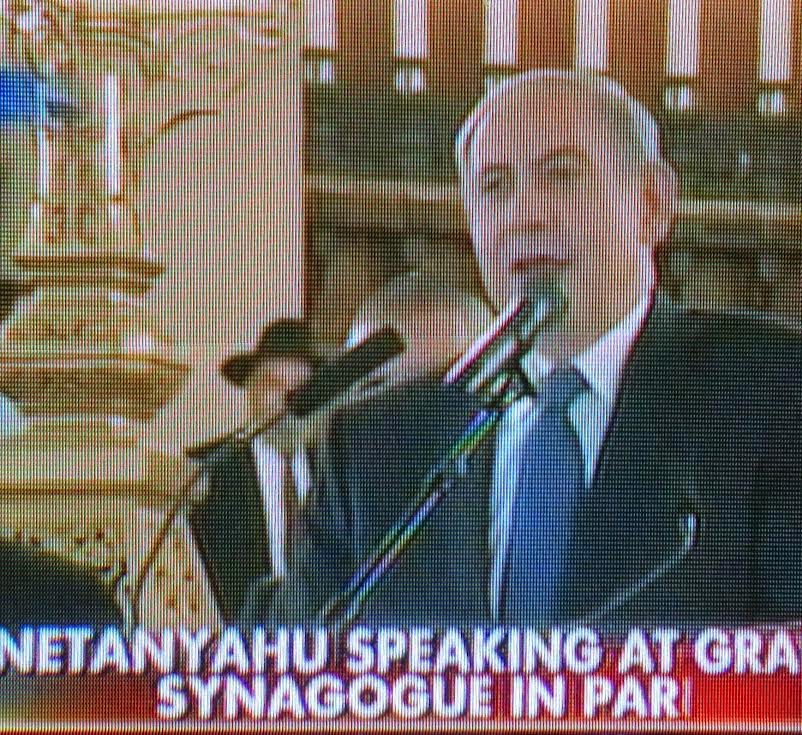 And he said these words bravely knowing that he had just put his life in danger at the hands of the very people he speaks of.

And as the march itself drew down, Prime Minister Benjamin Netanyahu and French President Francois Hollande were welcomed with loud cheers as they entered the Grand Synagogue in Paris (the largest synagogue in all of France) for the official ceremony honoring “all the victims” slaughtered at the hand of islamic savages.“Israel will live, Israel will overcome” those gathered chanted for they know that the muslim world's hatred of Israel is at the bottom of this all. Calling out Netanyahu’s nickname “Bibi” time and again and bursting into loud applause as he announced that the four Jewish hostages murdered in the kosher grocery store would be laid to rest in Israel, Netanyahu expressed his appreciation to France for taking a strong stance against both anti-Semitism and terrorism all while recognizing the“renewed struggle against the Islamic terrorism that is threatening all of humanity.”

And so it became obvious to all watching these events unfold live on their TVs that for at least one night all in that synagogue were Jewish in their hearts...were Jewish in their soul...putting aside the sad reality of growing anti-Semitism spreading throughout Europe...anti-Semitism reignited by the growing influx of muslims entering the nations of Europe.

But some good could come from last week's horrific events as maybe now Europe will close their borders to this muslim invasion and start deporting many of those currently there...maybe now Europe will realize that it's NOT the Jews but the muslims who are the enemies of their culture...maybe Europe will now start to understand that it is Israel who might be the one to save them for Obama's absence at yesterday's events shows that as long as he is America's president he will NOT lead the world in a true war against his blood brethren...blood brethren out to kill us all.

So now with a warning having been issued I hope the world, and especially America, takes notice that events like what happened in Paris will happen again and again, and that 'We the People' truly understand that the world's great oceans will NO long insulate us from events such as this. And since Obama will NOT protect us it becomes even more critical that these islamic bastards know...that Barack HUSSEIN Obama know...that behind every blade of grass...and you dear reader all know exactly what I mean.

May the 17 murdered at the hands of islamic savages forever Rest in Peace knowing that maybe their deaths will be the catalyst for people waking up to the fact that the enemy known as islam...just like a cancer growing within a body...must be totally eradicated in order for the civilized world to survive.

In tomorrow's part 2 of this 3-part series, my RIGHT SIDE PATRIOTS partner and friend Craig Andersen will address the specifics of islamic terrorism and its ramifications.
Posted by Diane Sori at 12:00 AM