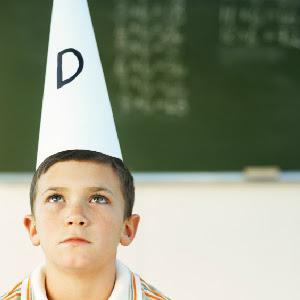 PHOTOS.COM
The new national education standards adopted by 45 States and the District of Columbia and now slipping into America’s schools are a collectivist’s dream.

Called Common Core, it is an attempt to create a Federally controlled education system designed to turn children into mind-numbed drones devoid of imagination and inculcated with a progressive culture of redistributionist economics, social justice, the mainstreaming of perverted lifestyles, secular humanism and radical environmentalism. It is a one-size-fits-all scheme that will dumb down students to the lowest common denominator.

Proponents of the program — people like radical Education Secretary Arne Duncan (champion of ridiculous zero-tolerance policies that lead to expulsions over breakfast tarts bitten into and papers torn into the shape of guns) — claim the goal is to prepare all students for entrance into community college. Never mind the fallacious logic that all children need a college education or even that a college education has much value in today’s part-time Obamacare economy, the truth is Common Core’s curriculum will create a group of students ignorant but well-prepared and well-versed in taking tests, as teachers will be evaluated on their students test scores rather than whether the children are learning anything useful.

Cash-strapped States grasped onto Common Core as a lifeline. President Barack Obama offered them hundreds of millions of dollars in “stimulus” funds and relief from the insidious No Child Left Behind standards that were to hit in full force in 2014. They did so sight unseen, based on the recommendation of two progressive lobbying groups, the National Governor’s Association (NGA) and Council of Chief State School Officers (CCSSO) — the groups that hold copyrights over the standards. The standards were written by the leftist ACHIEVE, Inc., without input from State legislators, school boards, teachers or parents.

In addition to Federal “stimulus” dollars, the Bill and Melinda Gates Foundation has dumped nearly $200 million into Common Core through the NGA, CCSSO, ACHIEVE, teachers’ unions, nonprofits and State and local school boards that are pushing Common Core. For more on the crony capitalist nature of Common Core, go here and here.

So what has Gates to gain from doing such a thing? In order to comply, schools will be purchasing a computer for every student and the software needed to run the curriculum, education program and testing system. In fact, Gates as much as admitted this in 2009 at the National Conference of State Legislators:

This is encouraging, but identifying common standards is not enough. We’ll know we’ve succeeded when the curriculum and the tests are aligned to these standards.

Secretary Arne Duncan recently announced that $350 million of the stimulus package will be used to create just these kinds of tests: next-generation assessments aligned to the common core. When the tests are aligned to the common standards, the curriculum will line up as well. And that will unleash powerful market forces in the service of better teaching.

For the first time, there will be a large uniform base of customers eager to buy products that can help every child learn and every teacher get better.

In other words, Gates sees millions of new customers eager to buy products created by Microsoft that align with copyrighted standards established by a nonprofit he controls.

The Federal and grant money that has so far been poured into Common Core implementation will cover only about half the costs. The rest must be accumulated through local means. In addition to computers for every student, Common Core requires school systems to install a group of “master teachers” who will be charged with coaching, monitoring and assessing classroom teachers and ensuring their ability to teach the tests.

So what about the education students will be receiving from Common Core?


According to teacher and author Dean Kalahar, it is geared toward ensuring “schoolchildren believe that America has been a nation of bigots, racists, greedy collusive poverty creating capitalists, war mongering imperialists, anti-immigrant, segregating, discriminating, and disenfranchising racists and farmers; and that kids should be an anti-war peace loving through diplomacy, diversity and immigration seeking, tolerant through racial identity politicking citizens of big government spending through redistribution of wealth and regulation providing Medicare, minimum wage, civil rights and affirmative action powered by the auspices of globalization and the United Nations.”

He bases that on an analysis of documents issued by the Florida Department of Education.

Stanford University professor James Milgram, the only mathematician on the validation panel, concluded that the Common Core math scheme would place American students two years behind their peers in other high-achieving countries. In protest, Milgram refused to sign off on the standards.

According to New York University Professor Jonathan Goodman, Common Core math standards imposed “significantly lower expectations with respect to algebra and geometry than the published standards of other countries.” The American Principles Project and Pioneer Institute notes that under Common Core, the teaching of algebra I begins in the ninth grade rather than the current eighth, as is common. Division is postponed to sixth grade. Prime factorization, common denominators, fractional conversion and decimals are de-emphasized.

Or, as Grayslake, Ill., curriculum director and Common Core proponent Amanda August told one group in explaining Common Core: “Even if they said 3 X 4 was 11, if they were able to explain their reasoning, and explain how they came up with their answer, really in words and in oral explanation… we’re really more focused on the explanation and the how and the why.”

It will also collect sensitive information from children including:
School boards across the country are doing all they can to avoid answering the tough questions now coming from parents just waking up to what’s befallen their children. But they’d better get ready to answer them; because when students begin failing the tests, parents are going to want to know why — just like in New York, where the failure rate of students was 69 percent. For blacks and Hispanics the failure rate was 84 percent.

When students fail tests and teachers are held accountable, teachers and school administrators look bad. The tests are then dumbed down so more students can pass and the teachers and administrators can say their techniques are working. Meanwhile, more and more automatons are walking out the school doors into failure and dependency.
Posted by Diane Sori at 10:51 AM