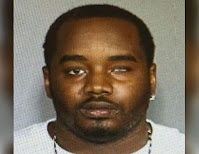 The man who allegedly ambushed and shot two NYPD officers —  one fatally — in Harlem Friday is a convicted felon who was on probation at the time, authorities said.

Lashawn McNeil, 47, was shot in the head and arm by a third officer as he tried to flee, and was hospitalized in critical condition Friday night, NYPD Chief of detectives James Essig said at a press conference.

The alleged gunman was on probation for a 2003 felony narcotics conviction in New York City, Essig said.

He also had several prior arrests outside of the Big Apple. In 1998, he was arrested in South Carolina for unlawful possession of a weapon. The matter was later dismissed, records show. McNeil was then busted for assaulting a police officer in Pennsylvania in 2002, Essig said. In 2003, he was arrested twice in Pennsylvania, once on a felony drug charge and also on a misdemeanor narcotics charge.

His last known address was in Allentown, Pennsylvania, about 90 miles west of the Big Apple. Read more and see photos and video here.

Posted by Diane Sori at 8:27 AM No comments:

Email ThisBlogThis!Share to TwitterShare to FacebookShare to Pinterest
By the Numbers, a Failing President
Pat Buchanan / Townhall Columnist

The opinions expressed by columnists are their own and do not necessarily represent the views of Townhall.com.

If the left believed that draping the Capitol riot of Jan. 6, 2021, around the neck of former President Donald Trump and the party that refused to repudiate him would sink the GOP, it appears to have miscalculated.

For, as the left painted the Capitol riot as an "armed insurrection," "domestic terrorism," "attempted coup," and political atrocity that stands beside Pearl Harbor and 9/11 as "a day that will live in infamy," Republicans were displacing the Democrats as America's first party.

Democrats began 2021 as the preferred party of 49% of the country. Only 40% identified as Republicans.

When 2022 began, the standings had been reversed.

Forty-two percent of Americans identified as Democrats, and 47% as Republicans, a turnaround of 14 points.

Email ThisBlogThis!Share to TwitterShare to FacebookShare to Pinterest
RIGHT SIDE PATRIOTS...PodCast

RIGHT SIDE PATRIOTS Craig Andresen and Diane Sori discuss the important news of the day including Biden's disastrous press conference; Manchin and Sinema side with Republicans regarding the filibuster; the narcissism that is Dr. Fauci; and rock icon Meat Loaf dead at 74....you can listen to it (and previous shows) at your convenience at: https://www.rspradio1.com to go directly to our podcasts and hope you become 'followers' of RIGHT SIDE PATRIOTS.

Posted by Diane Sori at 6:49 AM No comments: