Let’s connect the dots and reveal the truth that no liberal wants YOU to know.

Just a few months ago, on June 23rd, 2014 as I outlined in a National Patriot article, Bush Was Right – Saddam Had WMD ISIS had overrun and captured Al Muthanna…the Saddam Hussein chemical stockpile in Iraq…the very chemical weapons liberals far and wide have claimed never existed.

In that article, I stated two VERY important things.

First: “Muthanna is, in fact, where Saddam Hussein manufactured and stored…WMD and is now believed to be where the gas he used against the Kurds came from.”

Click on link below to read full article:
http://www.thenationalpatriot.com/2014/10/15/obama-islams-dancing-puppet/
Posted by Diane Sori at 1:32 PM 2 comments:


The United States must re-commit combat troops to Iraq if it wishes to stem the onslaught by militant Islamists who wish to turn the region into an Islamic state. That’s not just my opinion. That’s the carefully crafted opinion of Gen. Martin Dempsey, Chairman of the Joint Chiefs of Staff, although you have to look hard in the media to know it.

On Sunday, Gen. Martin said that so far he’s seen no reason to commit troops on the ground yet, but when asked if troops will be needed in the future Dempsey said “Yeah, there will be circumstances when the answer to that question will likely be yes,” careful not to be at odds with his commander-in-chief, who has said no such troops will ever be needed.

But even Obama allies are starting to see the light.

“This is a very, very serious threat,” said James Jeffrey, a former U.S. ambassador to Iraq under Obama who is now at the Washington Institute for Near East Policy. “Time isn’t on our side. We’re going to start losing coalition members.”

Jeffrey said the administration’s steadfast opposition to U.S. ground combat troops is making it harder to reassure allies of an American commitment to the battle.

“Constantly whining about how we’re never going to put ground troops in there is simply not going over well,” he said.

Despite liberal portrayals of an American military presence as obnoxious to Iraqis, leaders in Iraq’s Anbar Province are threatening to quit fighting ISIS if American military help on the ground is not forthcoming.

“Iraqi army forces and Anbar tribesmen fighting alongside them have threatened to abandon their weapons if the U.S. military does not intervene to help them,” said Anbar’s provincial council's deputy head, Falleh al-Issaw, according to CNN.

And that’s really been the point all along.

The United States is the only country that can effectively fight ISIS from a logistical standpoint. We have the capabilities to deal with an insurgency on the ground and all over the world. We have shown we know how to dismantle terror networks, especially as they grow in operational size. We ran these operations before both in Iraq and Afghanistan with very good success.

By making a permanent commitment to the stability of Iraq, the United States could start to rebuild the trust that we lost in the region by our precipitate departure from the country after we secured stability there. No action taken by the U.S. could so alter the strategic balance worldwide, than a re-commitment of combat troops to Iraq.

Unlike before however, we have allies in Iraq and all over the world that will willingly concede the point that U.S. intervention is not only smart, but also greatly desired by all.

Previously, the world wanted us to do the heavy lifting, while they sat by and criticized.

It is not too late to redeem what we—and the world-- lost in Iraq. In doing so, we could make sure that the great mass of Islamic people see that there is an alternative to secular or religious dictators that have been self-serving for too long in the region.

That mission would be a true Arab Spring, a spring of re-growth; not the false spring they have enjoyed thus far.
Posted by Diane Sori at 1:26 PM No comments:

The Centers for Everything but Disease Control

So now the federal health bureaucrats in charge of controlling diseases and pandemics want more money to do their jobs. Hmph.
Maybe if they hadn't been so busy squandering their massive government subsidies on everything but their core mission, we taxpayers might actually feel a twinge of sympathy.
At $7 billion, the Centers for Disease Control 2014 budget is nearly 200 percent bigger now than it was in 2000. Those evil, stingy Republicans actually approved CDC funding increases in January larger than what President Obama requested.

What are we getting for this ever-increasing amount of money? Answer: A power-hungry busybody brigade of politicized blame-mongers.

Money, money, it's always the money. Yet, while Ebola and enterovirus D68 wreak havoc on our health system, the CDC has been busying itself with an ever-widening array of non-disease control campaigns, like these recent crusades:

Last year, the meddling panel extended the agency's reach into transportation safety with a call to impose a federal universal motorcycle helmet law on the country. Is riding a Harley a disease? Why is this the CDC's business?

--Video games and TV violence. At Obama's behest, in the wake of high-profile school shootings, the CDC scored $10 million last year to study violent video games and media images, as well as to assess "existing strategies for preventing gun violence and identifying the most pressing research questions, with the greatest potential public health impact." Whatever that means. Why is this the CDC's business?

--Playground equipment. The CDC's "Injury Centers" (Did you know there are 13 of them?) have crafted a "national action plan" and funded countless studies to prevent boo-boos and accidents on the nation's playgrounds. Apparently, there aren't enough teachers, parents, local school districts, and county and state regulators to police the slides and seesaws. Why is this the CDC's business?

--"Social norming" in the schools. The CDC has funded studies and campaigns "promoting positive community norms" and "safe, stable, nurturing relationships (SSNRs)" in homes and schools. It's the mother of all government values clarifications programs. So bad attitudes are now a disease. Again, I ask: Why is this the CDC's business?

Here's a reminder of what the CDC does with money that's supposed to go to real disease control. In 2000, the agency essentially lied to Congress about how it spent up to $7.5 million earmarked each year since 1993 for research on the deadly hantavirus. "Instead, apparently without asking Congress, the CDC spent much of the money on other programs that the agency thought needed the funds more," The Washington Post found. The diversions were impossible to trace because of shoddy CDC bookkeeping practices. The CDC also misspent $22.7 million appropriated for chronic fatigue syndrome and was investigated in 2001 for squandering $13 million on hepatitis C research.

As I pointed out years ago, the CDC has its own private funding pipeline in the form of "Friends of CDC," an Atlanta-based group of deep-pocketed corporations, now including ATT, Costco, General Motors, Google, IBM and Microsoft. To date, the entity has raised some $400 million to support the CDC's work.

The Battle for Baghdad has Begun

Iraqi security forces evacuated another military base in restive Anbar province on Monday in the face of an offensive by the Islamic State of Iraq and Greater Syria (ISIS)….


The battle for Baghdad has begun, and should it fall, the consequences will be staggering. Patrick Poole lays out the 5 key implications if Baghdad falls to ISIS:


Reports that ISIS has surrounded Baghdad and is quickly closing in on the Baghdad International Airport (armed with MANPADS, no less) are troubling. Baghdad itself has been...

US “ally” Turkey bombs Kurds opposed to the Islamic State

The old Cold War web of alliances is badly outdated. Rapidly re-Islamizing Turkey is no friend of the United States. But to admit the patently obvious reality would be “Islamophobic.” Turkey wants to take advantage of the chaos to reestablish its own caliphate, and for that goal the Islamic State may be useful.


(Reuters) – War against Islamic State militants in Syria and Iraq threatened on Tuesday to unravel the delicate peace in neighbouring Turkey after the Turkish air force bombed Kurdish fighters furious over Ankara’s refusal to help protect their kin in Syria.

Turkey’s banned PKK Kurdish militant group accused Ankara of violating a two-year-old cease-fire with the air strikes, on the eve of a deadline set by the group’s jailed leader to salvage a peace process aimed at halting a three-decades-long insurgency.

At least 35 people were killed in riots last week when members of Turkey’s 15-million-strong Kurdish minority rose up in anger at the government for refusing to help defend the Syrian border town of Kobani from an Islamic State assault.

“For the first time in nearly two years, an air operation was carried out against our forces by the occupying Turkish Republic army,” the PKK said. “These attacks against two guerrilla bases at Daglica violated the ceasefire,” the PKK said, referring to an area near the border with Iraq.

The unrest in Turkey raised serious concerns that a peace process between Turkey and its Kurds could be in danger of collapse, a new source of turmoil in a region consumed by Iraqi and Syrian civil wars and an international campaign against Islamic State fighters.

U.S. President Barack Obama, who ordered a bombing campaign against Islamic State fighters that started in August, was to discuss the strategy on Tuesday with military leaders from 20 countries, including Turkey, Arab states and Western allies.

Washington has faced the difficult task of building a coalition to intervene in Syria and Iraq, two countries with complex multi-sided civil wars in which most of the nations of the Middle East have enemies and clients on the ground.

In particular, U.S. officials have expressed frustration at Turkey’s refusal to help them fight against Islamic State. Washington has said Turkey has agreed to let it strike from Turkish air base; Ankara says this is still under discussion.

NATO-member Turkey has refused to join the coalition unless it also confronts Syrian President Bashar al-Assad, a demand that Washington, which flies its air missions over Syria without objection from Assad, has so far rejected….

Posted by Diane Sori at 1:15 PM No comments: 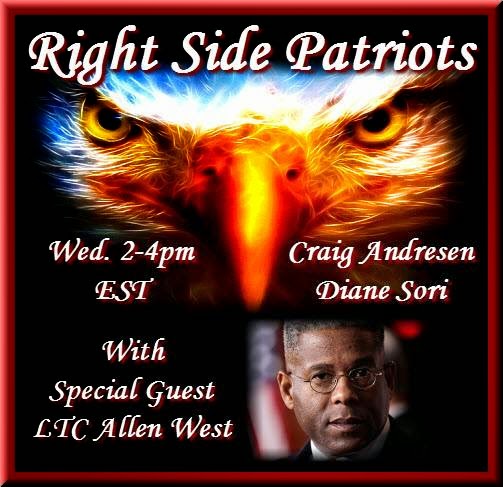 Today, Wednesday, October 15th...on RIGHT SIDE PATRIOTS on CPR Worldwide Media...join Craig and Diane as they discuss the upcoming midterm elections with their special guest...LTC Allen West. Also being discussed will be ISIS and the truth about Ebola's dangers...and it's NOT what you think.

RIGHT SIDE PATRIOTS...October 15th from 2-4pm EST on CPR Worldwide Media...http://cprworldwidemedia.com/live-radio/
And chat with us live at...https://www.facebook.com/groups/cprworldwidemedia/
Posted by Diane Sori at 11:59 AM No comments: