RIGHT SIDE PATRIOTS...for those who missed last night's show or just want to listen in again...where Craig Andresen and Diane Sori presented their CHRISTMAS SPECIAL including 'A Military Christmas'; 'Embellished By Faith, Predicated On Facts'; and the House impeachment vote...you can listen to it (and previous shows) at your convenience on our PodBean hosting/archive site. Click here: https://rightsidepatriots.podbean.com/ to go directly to our podcasts and hope you become 'followers' of RIGHT SIDE PATRIOTS. And our podcasts are now also on Spotify at: https://open.spotify.com/show/2ZfPSVcjon4DhpHcuAl3BT?si=R6DsTh1uQE2Rejlj2ACKkw 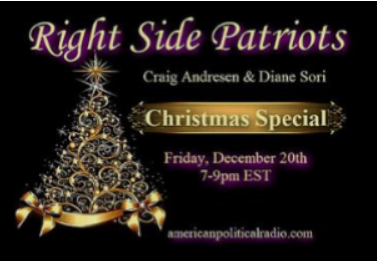 Posted by Diane Sori at 6:58 AM No comments:

The opinions expressed by columnists are their own and do not necessarily represent the views of Townhall.com.
Invoking Scripture to make his case for the abolition of slavery, Abraham Lincoln famously declared that “a House divided against itself cannot stand.” These words still ring true today as Speaker Nancy Pelosi fans the flames of partisanship with an illegitimate impeachment crusade against President Trump.

Not a single Republican voted for the Democrats’ two flimsy articles of impeachment that the Democrats rammed through the House of Representatives after a one-sided “inquiry” — but three members of Pelosi’s caucus could not bring themselves to go along with the farce, and a fourth voted against one of the articles. One Democrat, New Jersey Representative Jeff Van Drew, even switched his allegiance to the Party of Lincoln because of Nancy Pelosi’s impeachment sham.

Email ThisBlogThis!Share to TwitterShare to FacebookShare to Pinterest
Iranian security chief accuses US and “Zionist regime” of promoting the Islamic State, spreading “Islamophobia”

Ali Shamkhani, secretary of the Supreme National Security Council of Iran, met in Tehran with the Secretary of National Security Council of Tajikistan, Mohammadali Vatanzadeh. Shamkhani welcomed Tajikistan as a bilateral partner, “emphasizing the cooperation of the two countries in the fight against the threat of renewal and growing of ISIL in the region.” Shamkhani, […]
Read in browser »