Just a Thought...
On Trey Gowdy
By: Diane Sori / The Patriot Factor

If you reread Trey Gowdy's announcement he said he will NOT be running again for his Congressional seat, that he NEVER again would run for anything as he wants to go back to the law...to prosecuting. However, he NEVER said he would NOT be open to an appointment...as in replacing Jeff Sessions as Attorney General, a position he should have had from the beginning. Remember, Jeff Sessions has proved to be totally ineffectual and President Trump knows it, and I would bet that after the mid-terms he will be replaced if NOT before...just saying.
Posted by Diane Sori at 9:46 AM No comments:

Email ThisBlogThis!Share to TwitterShare to FacebookShare to Pinterest
Op-ed:
Presidential Greatness is Born
By: Diane Sori / The Patriot Factor / Right Side Patriots on American Political Radio

“Tonight I call upon all of us to set aside our differences, to seek out common ground, and to summon the unity we need to deliver for the people. This is really the key. These are the people we were elected to serve.”
- President Donald J. Trump
He started by extending an “open hand” to Democrats as he spoke of a “New American Moment”...he finished to chants of “U.S.A., U.S.A.”...and yet the Democrats remained silent and seated save for one...one brave Democrat who now faces the ire of his party...a party whose actions...or should I say whose inactions...were on full display for all the world to see at President Trump's first official 'State of the Union' Address...an address where he so truthfully stated that there's “never been a better time to start living the American dream.”
No better time especially after the eight long dark and shameful years of Barack HUSSEIN Obama where the very word 'American' became something to be ashamed of...but no more. America is back...'We the People' are back...and we are being led by a lion unafraid to roar.
Read entire article here: http://thepatriotfactor.blogspot.com/2018/01/op-ed-presidentialgreatness-is-born-by.html
Posted by Diane Sori at 9:40 AM No comments:

The Impact Of Immigrants On State Medicaid Budgets

What is the impact of immigrants on state Medicaid budgets?

Medicaid, which is jointly funded by the states and the federal government, is the chief source of state financing to pay for the health needs of low-income residents. According to a Kaiser Family Foundation study, it represents $1 out of every $6 spent on healthcare in the US. The Pew Charitable Trust analyzed state Medicaid data. Examining budgets from 2000—2013, it found that the percentage of states’ own funds spent on Medicaid in fiscal year 2013 was higher in 49 states.

In 2014, A report by the Center for Immigration Studies analyzed government data, and found that immigrants and their children accounted for 42 percent revealed that of the growth in Medicaid enrollment from 2011 to 2013. Among the report’s findings:
Read entire article here: https://finance.townhall.com/columnists/frankvernuccio/2018/01/31/the-impact-of-immigrants-on-state-medicaid-budgets-n2442392?utm_source=thdaily&utm_medium=email&utm_campaign=nl
Posted by Diane Sori at 9:33 AM No comments:

One would think that condemning an extremely violent international gang like MS-13 would be an innocuous thing for an American president to do, but alas, in today’s broken political discourse, Trump’s State of the Union spotlighting of the infamous Salvadoran criminal enterprise was met with screeches of indignation from anti-Trump politicians and media figures alike.

Much of the outrage over Trump’s choice to highlight the tragic murders of teenage friends Nisa Mickens and Kayla Cuevas was centered around criticizing the President for suggesting a linkage between immigrants and MS-13. The following comments from Sen. Kamala Harris (D-CA) on MSNBC were representative of this line of argument:

While hounding and censoring those who dissent from the hard-Left line. Google, YouTube and the rest are not neutral platforms in the slightest degree. Their hegemony must be ended, or the freedom of speech will be a dead letter. “Google Partners with Anti-Semitic Islamists,” by Steven Emerson, IPT News, January 30, 2018: Why are Google […]
Read in browser »

The Department of Justice and the FBI said they had “grave concerns” over releasing the FISA memo to the American public on Wednesday. As well they should be. I wouldn’t expect the DoJ or the FBI to welcome a document outlining their absolute corruption and abuse of power.

What else do they want to cover up? Maybe their complicity in the Garland, Texas ISIS attack? 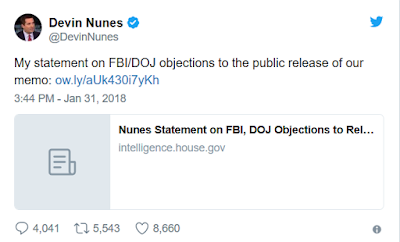 Read entire article here: https://gellerreport.com/2018/01/rbi-release-memo.html/
Posted by Diane Sori at 9:00 AM No comments: