TODAY, Tuesday, January 21st, from 7 to 9pm EST on American Political Radio, RIGHT SIDE PATRIOTS Craig Andresen and Diane Sori present two special reports on what they believe to be the truth about Iran's shootdown of Ukrainian Flight 752 and President Trump's rightfully ordered takedown of Qassem Solemani...plus the latest Senate impeachment news. This is one show you do NOT want to miss. 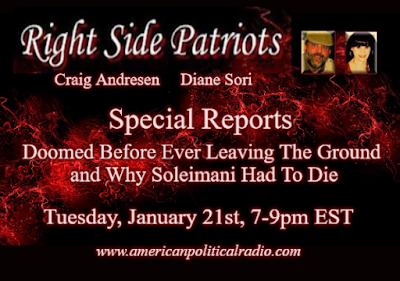 Putting together a puzzle tends to get frustrating at times but when one sees the puzzle finally coming together the frustration tends to turn into time well spent. For me such was the case with the still askew puzzle that is Iran's takedown of Ukraine International Airlines Flight 752. But in this case I started assembling that puzzle not from the corners working inwards towards center like most tend to do, but by anchoring the all-important center piece in place and working outwards from there. And with that piece firmly in place I could visualize the completed puzzle even before other pieces were added to it. And what I saw was a picture of not just what happened to the Ukrainian plane but exactly why it was doomed before ever leaving the ground.

Read entire article and see video's here: https://thepatriotfactor.blogspot.com/2020/01/op-ed-doomed-before-ever-leaving-ground_19.html
Posted by Diane Sori at 7:17 AM No comments:

Virginia Citizen’s Defense League had their Lobby Day yesterday. Thousands attended. It was probably the best turnout in years. And that’s the keyword here, folks: years. The VCDL has been organizing this event for quite some time, but if you’d check out MSDNC, CNN, and other liberal outlets infected with Trump Derangement Syndrome, you’d think this was the inaugural Nazi event in Richmond. Yes, this was a crowd filled with white nationalists, who were really mutants because they morphed into Asians, blacks, and women. Like the evil chameleons that they are, they mutated into folks who aren’t white and also didn’t commit any crimes. There were no arrests made at the rally. Of course, I’m being sarcastic. This was never nor has it ever been a Nazi gathering. You’d have to snort a ton of cocaine laced with Drano to believe that garbage lie, but the liberal media was at it again, peddling straight fakes news about the violence that was to come because law-abiding citizens were making their voices heard on gun rights.

Read entire article and see videos here: https://townhall.com/tipsheet/mattvespa/2020/01/21/im-stunned-to-see-the-fake-news-liberal-media-eat-it-in-their-coverage-of-virginias-progun-rights-rally-n2559835
Posted by Diane Sori at 7:15 AM No comments:

My latest in PJ Media:


You’d think that a group with multiple ties to the jihad terror group Hamas would be shunned by elected American representatives, and even more by law enforcement officials, except insofar as it was under investigation. You’d think wrong. The Washington Free Beacon reported Thursday that despite the “more than 120 members of Congress privately issued letters of support to a controversial Islamic-American advocacy group known for its involvement in one of America’s most prominent terrorism financing cases.” And on Friday, the Daily Wire added that “in October, the Trump administration handed out $100,000 of taxpayer dollars to the terror-tied Council on American-Islamic Relations (CAIR).”

Read entire article here: https://www.jihadwatch.org/2020/01/120-members-of-congress-send-letters-of-support-to-hamas-linked-group
Posted by Diane Sori at 7:10 AM No comments:

Boom! There it is. Plans to go “hell for leather.” Now the EU won’t be able to blackmail Great Britain. Thanks to President Trump, a man of his word.

Boris Backs Plans to Pursue Rapid Trade Deal with U.S., Use as Leverage over EU: Report

Prime Minister Boris Johnson is planning to use his pursuit of a U.S. trade deal as leverage when negotiating with the EU post-Brexit.

Mr Johnson has approved ministers’ plans to go “hell for leather” for a rapid U.S. free trade agreement, according to sources speaking to The Times. There are reportedly 70 civil servants in Whitehall prepared to work on an American trade deal, while there are smaller teams of 20 to 40 working on trade deals with Australia, New Zealand, and Japan.

Read entire article https://gellerreport.com/2020/01/boris-approves-plans-to-pursue-rapid-trade-deal-with-u-s.html/
Posted by Diane Sori at 6:58 AM No comments: