Happy 241st Birthday
to the greatest NAVY in the world... 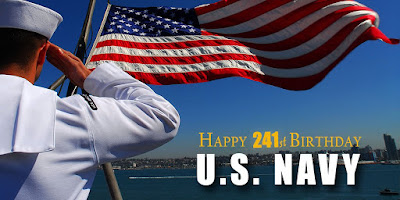 Posted by Diane Sori at 5:20 PM No comments:

Email ThisBlogThis!Share to TwitterShare to FacebookShare to Pinterest
Op-ed:
A Lie That Has Come Back to Haunt
By: Diane Sori / The Patriot Factor

How low will Hillary's herd of bought and paid for media whores go...here is a link to a story of lies being circulated across the internet to try and discredit one of the heroes of 9/11...New York City Mayor Rudy Giuliani and in turn have the fallout land on Donald J. Trump...and you can add in all those lost on 9/11 in my opinion. Click on this link: http://www.rawstory.com/2016/10/busted-rudy-giuliani-says-he-never-saw-hillary-clinton-in-nyc-on-911-but-pictures-prove-hes-lying/ to read it...it will surely make you sick.

Simply, it's an out and out lie as Hillary Clinton was not in nor anywhere near NYC on 9/11...the most horrific day in America history...but hey, "what difference at this point does it make"...infamous words that now take on yet another sinister meaning and guess what... when it comes to 9/11 every little detail does matter.

Now for the truth...Hillary Clinton did indeed go to Ground Zero but it was sometime after the attack (that's when this picture was taken as proven by the cleanliness of the area and the persons...as in no dust or debris can be seen anywhere) and was escorted on a private tour of the site, but like I said it was done not on 9/11 itself nor in the actual immediate aftermath.

On 9/11 Hillary Clinton was in Washington D.C., in fact she was at her home, the Clinton family-owned mansion, on Whitehaven Street. She was watching CNN and was on the phone with her legislative director when the first then second plane hit. She then went to her office in the Capitol complex before the third plane hit the Pentagon, and was evacuated by Capitol police from the Senate office buildings along with the others present. And Hillary even called Chelsea who was in New York and then Billy-Boy who was in Australia on the day of the attacks, but she did so from D.C.

Hillary Clinton and other senators received a briefing at the Capitol police station early in the evening of 9/11. And after a day she calls “a day indelibly etched in my mind,” Hillary joined with her congressional colleagues on the steps of the Capitol to sing 'God Bless America'...all of which can be seen in tapes and videos from that day.

So what is the bottom line...simply, Rudy Guiliani was 100% correct...Hillary Clinton was not only not in New York City on 9/11 or anywhere near it nor was she there in the immediately thereafter, and for any newspaper...whether it be in print or online...to claim that she was is about as low as any media outlet can go for while it not only defames 'America's Mayor' it is using a nightmare never to be forgotten...it is using the death of 3000 Americans...to try and aid Hillary Clinton in her effort to derail the campaign of Donald J. Trump...as in if she can't fight him with reporting on the issues we'll just make things up...and whomever our lie hurts be damned.

Using the blood and tears of 9/11 to aid in any candidate's political gain is an abomination of an especially evil kind, but when it comes to Hillary Clinton we have barely touched the surface of how low this political whore and her allies will go to aid her in trying to occupy the White House. And please know Hillary Clinton and/or her handlers all have seen this story by now but to date have issued no statement to set the record straight, and probably never will.

And as for the online rag 'RAWSTORY' who published this out-and-out lie, they need to immediately issue a retraction and then pull the story offline for this is the stuff of lawsuits...and rightfully so.

Sickening...just sickening.
Posted by Diane Sori at 10:41 AM 5 comments: