Just a Thought...
Fake New to the Nth Degree
By: Diane Sori / The Patriot Factor

Hmmm...the 'supposed' Russian involvement in the 2016 election is a story that just will NOT go away, but what most still do NOT get is that if it did happen...and I do NOT for a minute believe it did...it happened on Obama's watch yet he is NOT the one being called to task for it...Trump is. Talk about 'fake news'..'fake news' carried to the nth degree.
Posted by Diane Sori at 11:42 AM No comments:

The Democrats seem to not want to relent on the desire to see President Trump’s tax returns. They will tell you it is all about good government or that it is tradition. We need open government. They think Mr. Trump is hiding something. I am advising him now he should just come out and say he isn’t turning them over – deal with it. Let me explain why.
The biggest reason is that his tax returns are so complex that very few people could ever understand them. They are most likely littered with hundreds of entities that flow through to his return. He may be the owner of some regular corporations that don’t even appear on his personal tax return that are only taxed at the corporate level. If he owns many partnerships, Limited Liability Companies (LLC) and Chapter S Corporations -- where these entities have their income taxed on an individual’s tax return -- one cannot tell anything from his personal tax return about these entities other than Trump’s share of income or losses. You can’t tell how much he owns, how much he invested, how much they are worth, what tax treatments have been used or who else owns the company with Mr. Trump.

But the press and his enemies would act is if they do understand. I assert they are next to clueless.

When working on writing this column I wanted to find some examples, which are ubiquitous, and it did not take very long. That is because Mr. Trump released the beginnings of his tax plan and the anti-Trump press took a nanosecond to attack.

Al Gore thinks the weather has been out of the Book of Revelation, while Time and ABC News have reported that Antarctica is melting very quickly. Now, it’s not (via NASA):


The melt rate of West Antarctica's Thwaites Glacier is an important concern, because this glacier alone is currently responsible for about 1 percent of global sea level rise. A new NASA study finds that Thwaites' ice loss will continue, but not quite as rapidly as previous studies have estimated.

The new study, published in the journal Geophysical Research Letters, finds that numerical models used in previous studies have overestimated how rapidly ocean water is able to melt the glacier from below, leading them to overestimate the glacier's total ice loss over the next 50 years by about 7 percent.

Despite what liberals may say about global warming, science is never a settled issue. That’s what you should glean from this. The studies can be wrong. The models can be wrong. And the question nations face concerning so-called global warming is whether they wan to invest hundreds of billion, if not trillions, of dollars on a group of people who have been wrong before. How much economic growth, decreased standard of living, less prosperity, and the accompanying misery will you artificially inflict among those in your society on predictions that have been grossly inaccurate? In the 1970s, global cooling was the threat that could spell mankind’s doom. Nothing ever happened.

Peter Gwynne has gone back and updated his 1975 Newsweek piece to deny climate change skeptics of using is as ammunition. Still, he had to change it because the science was wrong—and Gwynne admits that. He said that this field of study is always advancing. Yet, if you speak to these green warriors, the issue is settled. There is no more debate.

I beg to differ.

Email ThisBlogThis!Share to TwitterShare to FacebookShare to Pinterest
Muslims in Michigan and New York plotted jihad massacres in U.S. for Hizballah
By Robert Spencer / Watch

Thomas Fuentes, the FBI’s special agent in charge of International Operations, noted in 2007 that Hizballah is reluctant to launch violent attacks on U.S. soil because it would hinder their overall operations: “They want to maintain a low profile by engaging in criminal activity [but] not direct attacks….They’ve not been enthusiastic about doing it on […]

Email ThisBlogThis!Share to TwitterShare to FacebookShare to Pinterest
Jeff Sessions to Testify to Intel Panel Tuesday to Rebut Comey
By Todd Beamon / NEWSMAX

Attorney General Jeff Sessions will testify Tuesday before the Senate Intelligence Committee to respond to former FBI Director James Comey's appearance before the panel this week. 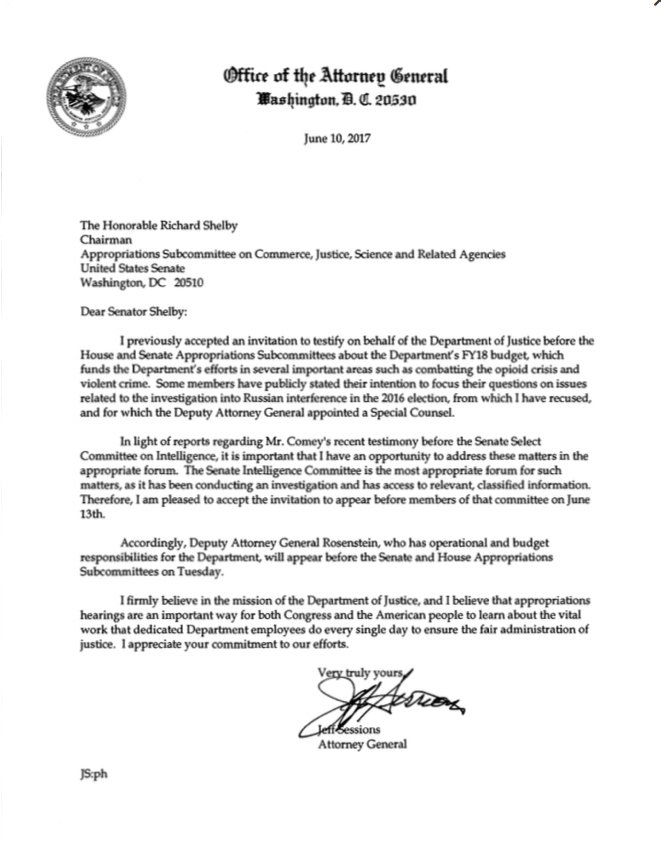 "In light of reports regarding Mr. Comey’s recent testimony before the Senate Select Committee on Intelligence, it is important that I have an opportunity to address these matters in the appropriate forum," he said in a letter to Sen. Richard Shelby, the Alabama Republican who chairs a Senate appropriations subcommittee.

Sessions was scheduled to appear next week before Shelby's subcommittee to discuss the Justice Department's budget, but would instead send Deputy Attorney General Rod Rosenstein in his place.

He told Shelby that the Russia investigation would very likely be the focus of the Intelligence Committee's questioning.

Under Islam, these devout Muslim fighters are entitled to these sex slaves. This horror is not their invention, but is codified and sanctioned under Islam.

The brutal execution of the girls was carried out in an open area and in front of hundreds of people.

The New York Times did a lengthy piece on how the Islamic State cites Islamic theology to justify its brutal acts, explaining the Quran “condones and encourages” raping women if they are not true believers of Islam.


he knelt beside the bed and prostrated himself in prayer before getting on top of her.

When it was over, he knelt to pray again, bookending the rape with acts of religious devotion.