Just got back from 2 weeks out of town but could NOT let today end without a Happy Flag Day...
and long may she wave! Semper Fidelis. 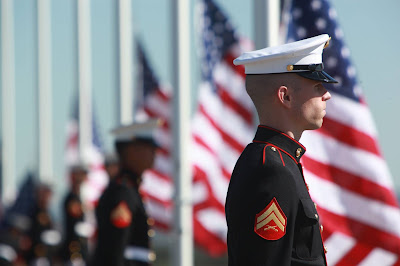 Email ThisBlogThis!Share to TwitterShare to FacebookShare to Pinterest
Op-ed:
Doing the Bare Minimum...If Even That
By: Diane Sori / The Patriot Factor / Right Side Patriots on CPR Worldwide Media cprworldwidemedia.net

“We don’t have, yet, a complete strategy to confront the threat posed by ISIL.”
- Barack HUSSEIN Obama's words after the recent summit meeting of the Group of 7

Republicans in Congress along with the general public...including surprisingly many Democrat party loyalists...think Obama is NOT doing enough...is NOT doing anything...to combat and defeat ISIS. The man who still refuses to even utter the words 'islamic terrorists' has now in a placating gesture to silence his critics...or so he thinks...announced last week that he is NOT only sending 450 more American troops to Iraq as 'advisors' but will also speed up the delivery of weapons and equipment to the Iraqi forces. Translation: Obama is sending 'advisors' to advise the very same Iraqi military that drops their American-supplied weapons and hightails it and runs when the going gets tough...leaving behind these very weapons for ISIS to use against the very ones we are trying to protect.

Oh what a continuing web of deceit Obama is weaving...an ever-expanding web of diversion and deflection...a web carefully and calculatingly weaved to hide the fact that he...Barack HUSSEIN Obama...is actually NOT only aiding and abetting the enemy but is in fact one of the enemy.

So now in only the second troop increase since America returned...sort of...to Iraq last year... bringing American troop levels up to 3,550... Obama's newest minimal troop increase in NO way amounts to supplying enough manpower to actually win the war against ISIS let alone securing the recapture of Ramadi and the Anbar province. Basically just a repackaging of the same tired old 'stay the course strategy' that has NOT worked to date...nor will it work in the future...Obama knows well that a major troop increase coupled with 'shock and awe' non-stop carpet bombing is what's needed but will NOT authorize either for that would result in too many of his brethren prematurely attaining their 72 virgins.

Claiming he's authorizing these additional troops to aid in Iraqi Prime Minister Haider al-Abadi’s recent gestures of inclusion towards the Sunnis, to advise and assist Iraqi security forces, and engage the area's Sunni tribesmen in an attempt to convince Sunni fighters to join together with the Shi'ite dominated Iraqi Army in the fight against ISIS, Obama knows well that this is a useless endeavor as the two factions do NOT trust let alone like each other. And if al-Abadi is weakened...and this is truly what Obama wants...his buddies in Shi'ite dominated Iran become emboldened even more than they already are. Remember, this is the very same Iran who so wants to wipe Israel off the map...the very same Iran Obama is aiding in that goal with his upcoming sure-to-be-signed farce of a nuclear deal. 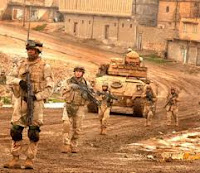 So with Al Taqqadum in the eastern part of Anbar Province serving as their base of operation, the newly ordered 450 troops will NOT to be positioned on the front lines...where they would actually make a difference albeit a small difference...and in those numbers there is NOT one much needed air controller being deployed who could aid in directing precision air strikes from U.S. bombers and Apache attack helicopters... basically translating into a waste of 450 American troops who like those before them are entering a war zone with their hands tied behind their backs.

Par for the course for our traitor-in-chief I would say.

Losing the peace after George W. Bush's 'surge' had won the war, it becomes obvious by his very words and actions...or should I say inactions...that Barack HUSSEIN Obama NEVER intend for Iraq to remain free nor did he ever intend for ISIS to be destroyed. 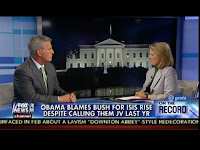 So many examples to that affect but here are just a few highlights of his most infamously remembered words...“The analogy we use around here sometimes, and I think is accurate, is if a J.V. team puts on Lakers uniforms, that doesn’t make them Kobe Bryant,” Obama's words that ISIS was but a junior varsity basketball team as he knowingly played down the strategic threat they posed NOT only to the region but to the U.S. as well....“A strategy that involves invading every country that harbors terrorist networks is naïve and unsustainable,” Obama's words delivered at West Point where he tried to NOT only distance himself from proven successful Bush-era strategies in an effort to convince the cadets that training vulnerable unprepared countries to fight against extremists is the answer.

And let's NOT forget ”The United States has no intention of being the Iraqi air force,” said a day after U.S. bombers began their campaign against ISIS who threatened to wipe out the Yazidi Christians...along with ”I don't think we're losing” just recently said as he passed the buck for the fall of Ramadi onto the ill-prepared Iraqi army...ill-prepared because he announced the withdrawal date of American forces for the enemy and the world to hear. 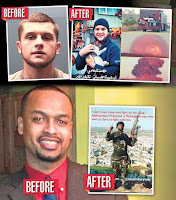 So while thousands of new recruits...including recruits from our own country... replenish the ranks of ISIS fighters faster than the Obama 'supposed' coalition can remove them from battle...Obama himself smugly sits back with a smirk on his face and congratulates his narcissistic self for implementing with the media's help a strategy that is NOTHING but useless talking points and platitudes that is working according to plan... working according to his plan to help forward the implementation of first a regional caliphate that once in place will then encompass Europe and hopefully then come to America.

And Congress knows this, our military hierarchy knows this, and We the People' know this...but sadly NOTHING is being done by anyone to stop this most traitorous of men. Now just imagine that the 40 or so thousand islamic savages do manage to beat the greatest military the world has ever known all because we dared NOT hurt the sensibilities nor fight back against those out to kill us all...the worst of all possible realities courtesy of we placating and condoning both the words and actions of the muslim occupying the White House.

And to that all I can say is God help us all.
Posted by Diane Sori at 6:41 AM No comments: