Standing on principle, not to mention common sense, is so rare these days that when someone does it they make headlines. That's because you can quickly be labeled a "bigot" if you oppose a lot of the sludge dumped on us by the secular left, and few can withstand the onslaught.

On Friday, the Department of Justice sent him a letter warning that North Carolina's House Bill 2, also known as the bathroom bill, violated the Civil Rights Act. The bill, which requires that transgender people use public bathrooms that match their birth certificates, was swiftly labeled anti-LGBT, which was all DOJ needed to hear. The government gave McCrory until Monday to confirm that North Carolina would not comply with or implement HB2. McCrory pushed back. On Monday, he filed a lawsuit against the DOJ, targeting Attorney General Loretta Lynch and Principal Deputy Assistant Attorney General Vanita Gupta. The suit, according to ABC News, "accused the DOJ of a 'radical reinterpretation' of Title VII of the Civil Rights Act and wrote that the federal government's position was 'a baseless and blatant overreach.'"

Every presidential nominee for each political party dating back four decades has released their tax returns to the public. Unconventional Donald Trump, the 2016 presumptive GOP nominee, is refusing to do so. For months on the campaign trail, Trump has claimed ongoing IRS audits prohibit him from release his tax returns.

Tax experts have repeatedly stated Trump isn't prevented from releasing his returns while under audit and there is no IRS rule or law preventing him from doing so. In fact, while under audit in 1973 and under investigation for Watergate, President Richard Nixon released his tax returns.

"It is disqualifying for a modern-day presidential nominee to refuse to release tax returns to the voters, especially one who has not been subject to public scrutiny in either military or public service. Tax returns provide the public with its sole confirmation of the veracity of a candidate's representations regarding charities, priorities, wealth, tax conformance, and conflicts of interest.

Further, while not a likely circumstance, the potential for hidden inappropriate associations with foreign entities, criminal organizations, or other unsavory groups is simply too great a risk to ignore for someone who is seeking to become commander-in-chief," Romney wrote Wednesday in a Facebook post. "Mr. Trump says he is being audited. So? There is nothing that prevents releasing tax returns that are being audited. Further, he could release returns for the years immediately prior to the years under audit. There is only one logical explanation for Mr. Trump's refusal to release his returns: there is a bombshell in them. Given Mr. Trump's equanimity with other flaws in his history, we can only assume it's a bombshell of unusual size."

Democrat presidential candidate and likely Democrat nominee Hillary Clinton has released her tax returns in full dating back a decade. They can be viewed on her campaign website.

As Iran repeats that US is its chief enemy, Kerry tries to drum up some business in Europe for Iran
By Robert Spencer/ Jihad Watch

John Kerry believes that poverty causes terrorism, and so he probably believes that a strong and prosperous Iran will drop its genocidal hatred of Israel and become a stabilizing force in the Middle East. Or more likely he doesn’t care a fig about Israel, but does think that Iran will become peaceful if it becomes […]

The Muslim leader aligned with Hitler during World War II. He lived in the lap of luxury (on Hitler’s dime) while raising Muslim armies for Hitler. He was responsible for the death of over 400,000 Jewish women and children.

The Nazis paid for their actions during the Holocaust. The Muslim world never did. They never even apologized. They were rewarded, and they are still being rewarded. Read more here (scroll).
My ads (above) caused a firestorm — but I was right.

The mufti of Jerusalem, Muhammad Hajj Amin Husseini, visits the volunteer Nazi Waffen-SS division in Bosnia, made up of Bosnian Muslims. 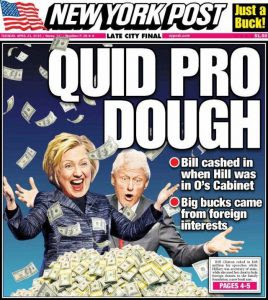 Daily Caller  As a presidential candidate, the amount of foreign cash the Clintons have amassed from the Persian Gulf states is “simply unprecedented,” says national security analyst Patrick Poole. “These regimes are buying access. You’ve got the Saudis. You’ve got the Kuwaitis, Oman, Qatar and the UAE. There are massive conflicts of interest. It’s beyond comprehension,” Poole told TheDCNF in an interview.

Overall, the Clinton Foundation has received upwards of $85 million in donations just from five Persian Gulf states and their monarchs, according to the foundation’s website. Activist groups have charged the five states — Saudi Arabia, Kuwait, Qatar, Oman and the United Arab Emirates (UAE) — have committed numerous human rights abuses.