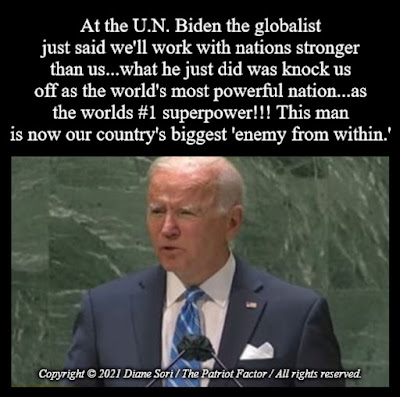 ...And with “treason” being an act of the highest order, it demands that a timely military court marshal take place with appropriate punishment being adjudicated, if the general was to be found guilty of treason, for his actions and words have jeopardized our national security as well as his knowingly and willingly putting “We the Peoples” lives in danger. And while the truth regarding his guilt or innocence will take time to sort out...investigations and hearings always slow down the judicial process whether said process be in a military or a civilian court...I believe the general still needs to be immediately removed from his duties for his credibility has not only been unequivocally tarnished, but he has put the all-important chain of command in jeopardy...command where the president alone is in control of our military...something that does not bode well for any president's administration...
Read entire article here.
Posted by Diane Sori at 10:01 AM No comments:

Main Taliban spokesman Zabihullah Mujahid said Mullah Abdul Qayyum Zakir will be deputy defence minister, while Sadr Ibrahim was named deputy minister for the interior. Both men had been expected to take major positions in the new government but neither was named in the main list of ministers announced this month.

The two were identified in U.N. reports as being among battlefield commanders loyal to the former Taliban leader Mullah Akhtar Mansour who were pressing the leadership to step up the war against the Western-backed government.

The appointments add to the roster of hardliners in the main group of ministers, which included figures like Sirajuddin Haqqani, head of the militant Haqqani network, blamed for a string of attacks on civilian targets.

The Department of Homeland Security is preparing to investigate and possibly provide disciplinary action against Border Patrol agents who stopped illegal Haitian men from entering the United States on Monday.

"The U.S. Department of Homeland Security on Monday pledged to 'swiftly' conduct an investigation into what it called 'extremely troubling' footage of Border Patrol agents on horseback aggressively dispersing Haitian migrants, saying the internal probe could lead to disciplinary actions," CBS News reports.

The move comes after White House Press Secretary Jen Psaki helped spread the false narrative that illegal immigrants were being "whipped" by agents on horseback.

The leftist media spent much of the day smearing agents, claiming a whip was used.