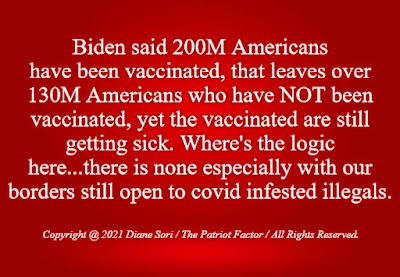 Email ThisBlogThis!Share to TwitterShare to FacebookShare to Pinterest
Labels: 200M, boarders, ILLEGALS, vaccinated
The most pivotal election of 2021 and what it says about the bigger showdowns ahead in 2022
Republicans are energized by Youngkin's 2021 Virginia victory ahead of 2022 midterm elections
Paul Steinhauser | Fox News

In an off-election year that was the busiest in recent memory, one electoral showdown stood out from the rest as the most consequential contest of 2021.

In a year that included statewide and legislative matchups in New Jersey and Virginia, a gubernatorial recall contest in California, and six special congressional elections for vacant House seats, Virginia’s faceoff for governor grabbed outsized media attention from coast to coast and was arguably the most pivotal race.

For those missing in action the past two months, Glenn Youngkin, a first-time candidate who hailed from the business wing of the Republican Party, narrowly defeated former Democratic Gov. Terry McAuliffe in a statewide contest with plenty of national implications. While Virginia gubernatorial elections are seen every four years as a likely bellwether of things to come in the ensuing midterm elections, some pundits are spotlighting what they consider the critical consequences of the 2021 results ahead of the 2022 midterms.

Cruz emphasized that Fauci has been “systematically wrong over and over and over again.” The doctor has had a change in opinion regarding mask efficacy from the beginning of the pandemic to now and has also at times doubted the likelihood that the coronavirus originated from a Chinese laboratory.

“He lied to the American people and said there’s no credible evidence that this virus escaped from a Chinese lab. That’s not true,” Cruz said. “There’s overwhelming evidence that it escaped from a Chinese lab. And very significantly, he also, by all appearances, has lied to the United States Congress." Read more and see ‘Recommended Townhall Video’ here.