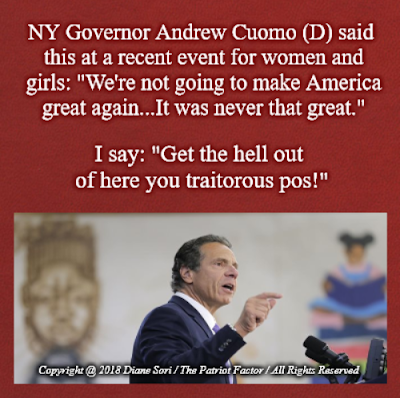 Democratic New York Gov. Andrew Cuomo has stepped in it a few times before with his colorful opinions. On Wednesday, he gave us a new unfortunate soundbite.

"We're not going to make America great again," Cuomo said at an event for women and girls. "It was never that great."

Listen to his tone. It doesn't sound like he was joking. The audience, as you can hear, didn't really know what to make of it, giving him a mix of weak applause and awkward laughter.

UN report: “ISIS is back” and prepared for “war”
By Christine Douglass-Williams / Jihad Watch

According to an alarming UN report, “ISIS is back…regaining strength….ready for war” and has “gathered 30,000 fighters and could be preparing for a wave of offensives around the world”. This comes as no surprise to those who understand the reality of jihad terror. Meanwhile Al-Qaeda also remains dangerous, with powerful franchises in Yemen, Somalia and […]
Read in browser »

This was long overdue. Obama’s bag man is guilty of treason. He has been working in the cause of our enemies for years.


The Kentucky Senator called John Brennan the most biased, bigoted, unhinged Director of the CIA we’ve ever had, in response to Brennan’s latest attack on President Trump, labeling the Putin summit performance “treasonous.”
“John Brennan started out his adulthood by voting for the Communist Party presidential candidate,” Rand Paul said. “He’s now ending his career by showing himself to be the most biased, bigoted, over-the-top, hyperbolic sort of unhinged director of the CIA we’ve ever had.”
He was Obama’s Luca Brasi (without any of his better qualities), named CIA director for his exemplary work in cleaning up after Obama. If you recall, during the presidential election, I ran a number of stories on the breach of Obama’s passport at the Department of State. Brennan was the CEO of TAC – and also a consultant to the 2008 Obama campaign – when one of its contract employees was accused of improperly accessing the passport files of Obama, prompting an investigation by the State Department...

Read entire article here: https://gellerreport.com/2018/08/trump-revokes-brennan-securityclearance.html/
Posted by Diane Sori at 8:04 AM No comments: