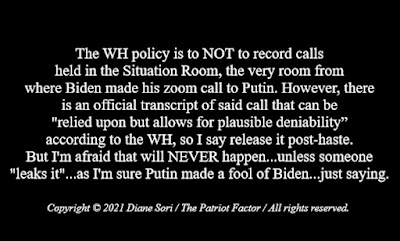 President Biden and Russian President Vladimir Putin spoke one-on-one Tuesday morning regarding tensions between the Kremlin and Ukraine, a "high-stakes diplomatic effort" by the U.S. at deterring Russia from invading Kyiv. Though exact details of the meeting have yet to emerge (if they do at all), here's what we know about what went down:

As for the conference's kick off, CBS News' Ed O'Keefe shared a video broadcast from Russian state television showing Biden and Putin kindly greeting one another as the bilat began.

Just don't think the two leaders were waving hi to one another over Zoom, reports The New York Times. Instead, Biden relied on his administration's "secure communications process" to get through to Russia, a system with protocol that often varies from White House to White House. A secure call essentially means the resulting conversation is encrypted. Read more and see tweets and video here.

The Presidential Commission on the Supreme Court voted unanimously Tuesday in favor of approving its final report and sending it to President Biden's desk.

The vote concluded the work of the 34-member commission, which held six public meetings and called on 44 witnesses. Biden, who has expressed opposition to expanding the court, formed the commission in April to study court expansion and reform amid calls from some within the Democratic Party to add more justices.

The final draft of the 288-page report, which drew vocal opposition regarding some of its conclusions, was released Monday and stopped short of offering specific recommendations. Instead, it offered a summary of arguments for and against issues ranging from court-packing and judicial term limits to various elements of court practice.