Any new employee always appreciates a warm welcome to the office - especially someone about to assume the highest title in the land. President George H. W. Bush, who is celebrating his 92nd birthday on Sunday, understood this and it's why, before leaving the White House in 1993, he left a friendly note for his successor. 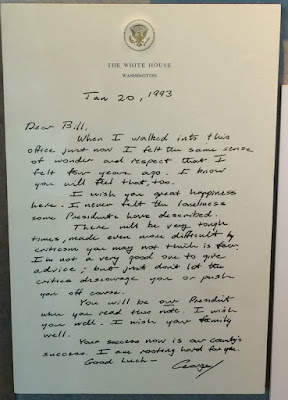 It's especially noteworthy that Bush's advice to Clinton was to find "happiness" in his new role. As stressful as it is being president, it can often be hard to remember to smile.

It seems Clinton didn't forget Bush's kindness. Fast forward to 2004, the two began working together on fundraisers for victims recovering from the 2004 Asian tsunami and, later, Hurricane Katrina.
Clinton shares a special friendship with George W. Bush as well. They playfully tease each other at events and on social media. Most entertainingly, Bush likes to refer to Clinton as his "brother from another mother."

Bill Clinton's friendship with the Bushes proves that humanity and the greater good is more important than party affiliation. Representing the American people is a privilege and honor. As Bush senior said, the president of the United States is the president of all Americans. Considering how partisan the country has appeared to become each election year, that too can also be easy to forget.
Posted by Diane Sori at 11:48 AM No comments:

Orlando jihadi’s coworker complained about him, company did nothing because he was Muslim
By Robert Spencer / Jihad Watch

“Gilroy, a former Fort Pierce police officer, said Mateen frequently made homophobic and racial comments. Gilroy said he complained to his employer several times but it did nothing because he was Muslim.” They knew that if they had acted against Mateen, they would have been excoriated in the media for “Islamophobia,” and may even have […]

Omar Mateen had been interviewed by the FBI twice for Islamic terror ties, and had once been on a terrorist watch list. James Zirkle, who went to high school with Mateen, claimed on FOX news that “he [Mateen] was alright until 9/11 happened, [then] he started acting totally different.” He cheered 9/11. Zirkle also claimed that Mateen stood up in front of classmates one time and claimed Osama bin Laden was his uncle.

Sunday on a special edition of CNN’s “Outfront,” network...

The man suspected of killing 50 people and wounding 53 in a mass shooting Sunday in Florida was employed by G4S Plc, a British security firm whose clients in more than 100 countries include the U.S. government.

Omar Mateen, 29, is a U.S. citizen who declared allegiance to the Islamic State terrorist group in the hours before the largest mass shooting in the nation’s history at a gay nightclub in Orlando. The Federal Bureau of Investigation had investigated Mateen twice before, interviewing him each time before closing the probes, according to an FBI spokesman. Mateen died in a shootout with police.

Mateen had been a G4S employee since Sept. 10, 2007, and the company is cooperating with the FBI, John Kenning, its chief executive officer for North America, said in a statement. “We are shocked and saddened by the tragic event that occurred at the Orlando nightclub,” he said. “Our thoughts and prayers are with all of the friends, families and people affected by this unspeakable tragedy.”

Email ThisBlogThis!Share to TwitterShare to FacebookShare to Pinterest
Op-ed:
NO MORE!
By: Diane Sori / The Patriot Factor / Right Side Patriots on americanpbn.com

Short and to the point...by now we all know about the past day's horrific events in Orlando, Florida, and as can be expected Obama and Hillary are finding every and anyone else to blame for the murdering rampage except the shooter. Now blaming this latest in a string of mass murders on the gun lobby, which is absolutely insane, this was an attack on American citizens...on America..by a 'homegrown' muslim, by an islamic terrorist with allegiances to ISIS, period.

Now I and all America demand these savages be stopped and stopped now! All, and I mean all, immigration must be halted...and that includes NO taking in of Syrian anything-but-refugees, NO anyone from the Middle East (except for Israel of course), and full profiling of 'the brethren'...of muslims...already here must be put in place, and any having any ties whatsoever to any terrorist group must be arrested IMMEDIATELY!

Remember taqiyya...'the brethren' cannot be trusted...ever. And remember too, this particular muslim islamic terrorist was known to the F.B.I. and deemed NOT to be a danger even though he had twice traveled to Saudi Arabia within the past 5 or so years.


Too much American blood has already been spilled on America's streets, and it's time 'We the People' stand united against a traitorous administration and say 'NO MORE!' Simply, it's NOT Israel that must be wiped off the map as islamists want...it's NOT Western civilization that is the enemy...it's the cult of islam that does NOT belong amongst the world of civilized men.

May the victims Rest in Everlasting Peace and may the shooter...the savage murdering 29-year old bast*rd Omar Mir Seddique Mateen...rot forever in hell. 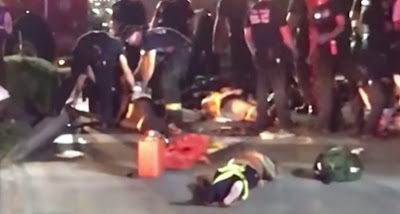