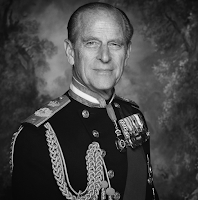 Prince Philip, Duke of Edinburgh and Queen Elizabeth II’s husband of 73 years, died on Friday at Windsor Castle. He was 99.

The royal family confirmed the Duke of Edinburgh's death on Friday in a statement shared to Twitter.

"It is with deep sorrow that Her Majesty The Queen has announced the death of her beloved husband, His Royal Highness The Prince Philip, Duke of Edinburgh. His Royal Highness passed away peacefully this morning at Windsor Castle.

During England’s coronavirus lockdown, he had been staying at Windsor Castle, west of London, with the queen, 94.

On Feb. 16, Philip was admitted to a London hospital after feeling unwell. On March 3, he underwent a procedure for a pre-existing heart condition at St. Bartholomew’s Hospital before being transferred back to King Edward VII hospital on March 5 and ultimately released home on March 16.

Email ThisBlogThis!Share to TwitterShare to FacebookShare to Pinterest
Confirmed: The Laptop Belongs to Hunter Biden...And the Liberal Media Can Eat a Ton of Crow
Matt Vespa / Townhall Tipsheet

They should actually get a frying pan to the face. The liberal media peddled lies and more lies about Hunter Biden and the laptop that exposed the sordid business dealings of the Biden family. It was the 2020 October Surprise that the media depth charged. Why? It’s obvious. It made Joe Biden look bad. It torched the narrative that the former vice president knew nothing about his son’s business dealings. He was in the thick of it, especially on the failed CEFC China Energy deal. China still gave the Biden family millions, however.

The contents of the laptop were acquired by The New York Post who had the scoop and Big Tech censored them for it. It was a coordinated attempt to keep the image of squeaky clean Joe alive. They muzzled conservative outlets and allowed the liberal media titans to peddle a false narrative about the laptop being Russian disinformation. Former Obama intelligence clowns who also were die-hard believers in the Russian collusion myth threw this into the echo chamber. It was the Democrat-media complex at work.