"I was one of the Republicans insisting that [Special Counsel Robert] Mueller be allowed to do his job. I never thought it was a witch hunt. The Mueller report is in. No collusion," Graham said. "You know Mueller didn't do anything on obstruction. Now I'm insisting that we get to the bottom of this, all of the documents around the FISA warrant application released.

"I want to find out exactly how the counterintelligence operation began,” Graham said. “I think transparency is good for the American people. Not one Democrat seems to care," Graham said. "I wish some Democrat would come forward to find out if the FISA court was defrauded by the FBI and the Department of Justice.”

The Trump effect. He’s not just a wildly popular president among the people, he’s a global phenomenon. #Trump2020

Polls are all closed.  Election results are beginning to come in fast.  The overall result in the European (EU) Parliamentary Election reflects massive gains for conservative nationalists in Italy, Greece, France, Poland, Hungary, Austria, U.K. and others…

Over 400 million people can vote in 28 countries, seven of which held ballots between Thursday and Saturday, with the remainder voting today, Sunday.

Read entire article here: https://gellerreport.com/2019/05/profreedom-winners-eu-elections.html/
Posted by Diane Sori at 8:41 AM No comments:

Today, Tuesday, May 28th, from 7 to 9pm EST on American Political Radio, RIGHT SIDE PATRIOTS Craig Andresen and Diane Sori once again welcome their very special guest Mudar Zahran, Secretary General of the Jordanian Opposition Coalition to their show; and important news of the day. 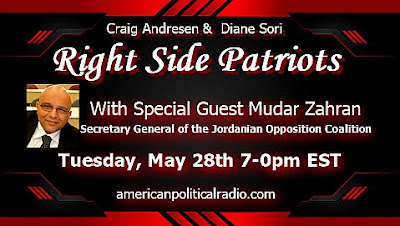