RIGHT SIDE PATRIOTS...for those who missed last night's show (or just want to listen in again) where Craig and Diane discussed 'On Becoming the Circus of the Absurd'; 'Rosenstein and the Rosetta Stone Documents'; and news of the day...you can listen to it (and previous shows) anytime at your convenience on our PodBean hosting/archive site.

There is another allegation lobbed against Brett Kavanaugh. It hasn’t been given much oxygen because, well, the cast of characters is suspect. Stormy Daniels’ lawyer Michael Avenatti reportedly has information that Kavanaugh and Mark Judge had a gang-rape ring that operated in the 1980s. Judge is a man Christine Blasey Ford cited in her allegation of an attempted sexual assault by a drunken 17-year-old Kavanaugh at a high school party. Judge and everyone else mentioned as a potential witness has refuted her story. There are no witnesses, there’s no evidence, and Ford can’t remember key details about the incident, like why there was a party in the first place, how she got there, and who owned the house where it was held to some 30-plus years ago.

The allegation is thin. It’s evidence-free—but it’s plunged the whole nomination into chaos. There’s a hearing on this development set for Thursday. But back to Avenatti, Leah has more:

Federal officials are being urged to drop Obama administration policies that give special treatment to Muslim students in violation of the Constitution. Even worse than the Obama administration’s preferential treatment of Muslims, CAIR (an unindicted co-conspirator in a Hamas terror funding case) is being promoted….. The organization is asking the government to rescind policies in which […]
Read in browser »

Posted by Diane Sori at 7:36 AM No comments:

For the first time in 45 years, the United States has surpassed Russia and Saudia Arabia in oil production.

Call it the Trump effect, call it the Midas touch.

Call it what you want but America, under this president, has become the largest producer of oil in the world.

His ability to cut red tape and ease regulations, creating atmospheres that are conducive to producing. Also: Trump doesn’t play the same radical environmentalism game as Barack Obama did.
And now the country is responding with massive business ventures.

More from the Daily Mail:

Read entire article here: https://gellerreport.com/2018/09/trump-oil-america.html/
Posted by Diane Sori at 7:32 AM No comments: 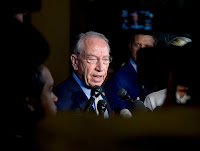