How to Answer a False Accusation of Racism

Yesterday, a student contacted me with a concern that is common among those taking courses in the social sciences and humanities.

This particular student is enrolled in an online criminology class taught by a leftist professor. During a discussion of the Black Lives Matter movement, one of the more conservative students in her class used the phrase “all lives matter.” Predictably, the leftist professor objected. But he went even further by repeatedly accusing the student of racism. To make matters worse, the ad hominem attacks were made in front of all the students enrolled in the course. It was part of an online class “discussion.”

Although the student who contacted me was not the one attacked, she wanted to know how to confront the professor who was so clearly out of line. She was understandably reticent to express her own views after seeing a fellow student attacked in the middle of class discussion. Given the importance of the issue, I am printing my response to the student to help other students who are similarly attacked or intimidated in the classroom:

Dear Amber: The first thing to remember about responding to a false accuser is what not to do. Above all, you must resist the temptation to accuse the professor of harassment or of breaking the campus speech code. That is what leftists do and it is wrong. The best way to respond to bad speech is with better speech, not censorship.

One of the most poignant scenes in “A Charlie Brown Christmas” is when Linus stands on a stage and recites a passage from the Holy Bible describing the Christmas story.

“For unto you is born this day in the city of David a savior which is Christ the Lord. That’s what Christmas is all about, Charlie Brown,” Linus said.

It really does sum up the true meaning – the true reason for the holiday season – the birth of our Lord.

Dedra Shannon, a staffer at Patterson Middle School in Killeen, Texas, was so inspired by the scene she decided to use images to decorate the door to the nurse’s office.

The decorations included a picture of Linus, the scrawny Christmas tree and that classic passage of dialogue about the true meaning of the holiday.

The decorations were installed on Dec. 5 and on Dec. 7 Ms. Shannon was confronted by the school’s principal.

President Barack Obama and his successor, Donald Trump, praised John Glenn — who died at age 95 — as a space pioneer and true American hero.

Donald J. Trump Verified account ‏@realDonaldTrump
Today we lost a great pioneer of air and space in John Glenn. He was a hero and inspired generations of future explorers. He will be missed.

"I met him on two separate occasions. Liked him. Always liked him.

"But he was, indeed, an American hero."

Email ThisBlogThis!Share to TwitterShare to FacebookShare to Pinterest
Muslim cleric: Muslims may dress as priests or rabbis to carry out jihad massacres

Shocking: Sheikh Allows Fake Clothing for Terror Attacks – English Subtitles from Al Hayat Channel on Vimeo. This, explains the Saudi cleric Walid al-Wadaan, is because Muhammad allowed for lying in wartime. A hadith has Muhammad granting permission to lie “in battle, for bringing reconciliation amongst persons and the narration of the words of the […]

NO, Muslims in America are NOT like the Japanese-Americans who were interned during WWII…but they want you to think so 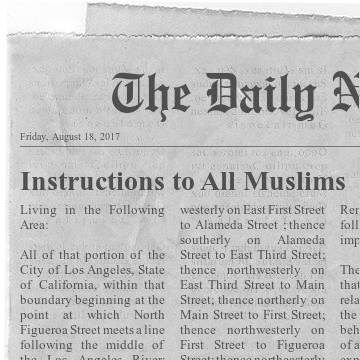 The idea of a Muslim Registry put forth by the Trump campaign has people wondering if the old internment camps set up for the Japanese during WWII are about to reopen for Muslims, thanks to the rise in Islamic terrorism and jihadists posing as refugees. But there is a huge difference between the Japanese back then and the Muslims today who represent an ongoing threat to America.

The idea of temporary internment camps means that when the war is over, the internees are released back into the population as was done after WWII. The difference with Muslims is that the ongoing war with Islam will NEVER be over…

Email ThisBlogThis!Share to TwitterShare to FacebookShare to Pinterest
Megyn Kelly: “Pam [sic] Geller is, no question, a HATEFUL PERSON”

Last night, Megyn Kelly want on NPR and proceeded to smear and libel me in order to garner favor with the left-wing primitives she so desperately wishes to get into bed with.

How embarrassing for her. She has the loyalty of an alley cat. One can only pity those, such as her first husband and Roger Ailes (and an army of others, I am sure), who trusted and believed in her.
She’s jumped the shark.

In hitting President-elect Trump and supposedly defending the freedom of speech, Megyn Kelly on NPR Wednesday night referred to “Pam [sic] Geller, who there’s no question is a hateful person, who held this Draw Muhammad contest down in Texas.”

But in smearing me as “hateful,” she demonstrates that she doesn’t really know what was at stake when Islamic jihadis attacked our free speech event in Garland.