15,000 Islamic Supremacists come together on Memorial Day weekend to double down on shoving sharia down our the throats

Muslim Brotherhood proxies ICNA and MAS are sponsoring a convention May 26 – 28, 2012 in Hartford, CT to educate their stealth jihadists on how best  to help the public understand Sharia and counter the rise of ‘Islamophobia’ in America.” The campaign aims to shift focus from the ‘misnomer’ Sharia law and draw attention to what really is at stake here—your religious freedom. (Nice obfuscation there)

The Blaze  American Muslims who are disheartened by increasingly fervent attacks on sharia law are planning to assemble en masse this weekend to protest against what they fear are attempts to discriminate against their way of life.

This weekend, 15,000 believers are expected to descent upon Hartford, Connecticut, for the 37th annual Islamic Circle of North America (ICNA) convention. 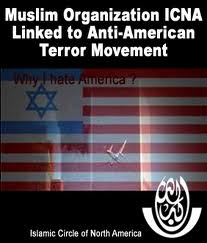 The Muslim American Society-sponsored conference, entitled, “Defending Religious Freedom: Understanding Shariah,” will take place from May 26-28. According to Religion News Service, the event is the second largest annual event for Muslims in the U.S., behind the Islamic Society of North America’s annual gathering (the latter event attracts 30,000+ people.) 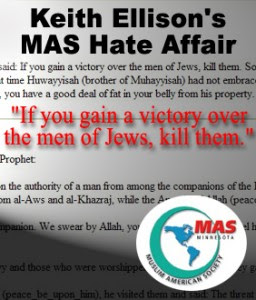 The focus of the event will be on sharia, Islamic law that is intended to govern the lives of believers. The Blaze has covered the opposition that exists to Muslim law here in America numerous times before.

As RNS highlights, Kansas, Arizona, Oklahoma, Missouri, South Dakota and Tennessee are among the locations where legislation has been approved to ban judges from considering foreign laws. This, of course, would include sharia law (in Kansas, legislation has just been signed by GOP Gov. Sam Brownback).

While politicians see this as a way of protecting the U.S. constitution, others — particularly Muslims who embrace sharia — believe that these laws are discriminatory. Take, for instance, Naeem Baig, the ICNA’s vice president of public affairs, who has some harsh words for those opposed to Islamic law.

“It’s a deep-down hatred of Muslims that motivates them (BINGO!). They don’t want to see Muslims in America,” (DOUBLE BINGO!) Baig said. “Muslims need to be educated about sharia. There’s a need for the community to better understand what sharia means to us, and how to apply sharia in a society where most people are not of the same faith.” (There is only one law in America – American law. Look it up in the Constitution)

Memorial Day is quickly approaching, and to most Americans, this means the beginning of summer. In reality, it's the one day of the year we dedicate to remembering those who gave all to protect the freedoms we cherish. As you plan your first barbecue of the season and prepare for the warm weather, I urge you to keep in mind the real reason we celebrate Memorial Day: to pay tribute to America's veterans and fallen soldiers.

I remember the way our Vietnam Veterans were treated upon returning home. It was a difficult time in our country's history and we must do all we can to make sure that when our men and women are sent to war they are never again forced into the shadows and treated badly, as our returning Vietnam Veterans were.

That's one of the reasons I am so active in the veterans' community and today serve as Honorary Grand Marshal of The American Veterans Center's National Memorial Day Parade in Washington, DC. I'm writing today because this year's parade is our first public opportunity to honor our newest generation of veterans, the young men and women who bravely served in Iraq, sacrificing family relationships, jobs, and economic stability to go off and fight for our country.

Will you join me in paying tribute to our Iraq War veterans and all of America's veterans and active duty service members by marching in the National Memorial Day Parade on May 28? You can't come all the way to Washington, DC, you say? You don't have to travel to take part in this special tribute, because we're holding a virtual parade online! Follow this link to register, select your avatar and join thousands of patriots across our nation to honor America's veterans from the Revolutionary War up to the Iraq War.

Freedom isn't free, but for nearly 70 years, Washington, DC, was without a parade on our Armed Services' most sacred day. In 2005, the American Veterans Center revived the tradition of a Memorial Day parade in our nation's capital, and today it serves two vital civic purposes: to give the general public the opportunity to honor our service members and pay tribute to our veterans, while allowing active duty troops, veterans, and re-enactors showcase the sacrifice of all our veterans in an exciting procession of American history the whole family can enjoy.

Whether you live in the Washington Metro Area and plan to attend this year's parade or you live as far away as Hawaii or Alaska, I encourage you to join us on May 28, 2012, to honor America's veterans, including the 4,487 American service members who gave their lives in the Iraq War.

Please follow this link http://www.virtualbootsontheground.com/ to register for the virtual Memorial Day parade and join thousands of veterans, active duty troops and civilians across America to pay tribute to our veterans.

With your support and participation in the virtual parade, we'll promote our veterans' legacy, remember those who gave all, and preserve their sacrifices. Thank you in advance.

P.S. Celebrate Memorial Day 2012 and honor America's veterans and active duty troops by marching in the National Memorial Day Parade online. Follow this link to register, select your avatar, and join millions of your fellow patriots on May 28, 2012.

Virtual Boots on the Ground | May 28, 2012
www.virtualbootsontheground.com
Posted by Diane Sori at 7:47 PM No comments:

Sharia law...another reason to vote Obama out
By: Diane Sori

Over the past few years, sharia law has been slowly working its way into American society and into our judicial system, so much so that some U.S. judges are even citing sharia law in their rulings even when those rulings conflict with Constitutional protections.

But thankfully, Americans are starting to fight back against the intrusion of this barbaric and subjugating system of jurisprudence for we know that sharia law has NO place in our land let alone in our courts.

In November 2010, federal judge Vicki Miles-LaGrange placed a temporary block on an Oklahoma amendment that would stop state judges from consulting sharia law when a case involving muslims came before them.  This temporary block, issued as a restraining order, came just a few days after the Oklahoma chapter of CAIR (the Council on American-Islamic Relations) filed a lawsuit.  CAIR alleged the amendment violated the First Amendment's Establishment Clause that bars government bodies from making laws respecting the establishment of religion.

Being that sharia law is islamic law and islamic law only, based solely on the qur’an and the teachings of mohammed, the voters rightly decided that sharia law had NO place in their state’s court system and that the rule of law in Oklahoma will be American law only...as it should be.

Now Kansas Governor Sam Brownback has signed into law a bill aimed at keeping Kansas courts and government agencies from basing any decisions and rulings on islamic (sharia) or any foreign legal codes, and 20 other states are considering similar legislation.

The citizens of Oklahoma and the Governor of Kansas were wise enough to see that sharia law primarily is a law that violates the human rights of women, and that the so-called legal aspects of sharia, with its strict and harsh punishments for even minor or just perceived infractions, basically de-humanizes women, and that it is counter to the laws stated in our Constitution. In fact, the entire concept of sharia law is diametrically opposite our Constitution.

Our Declaration of Independence speaks of life, liberty, and the pursuit of happiness, sharia law speaks of death, subjugation, and misery.  Under sharia law women are nothing more than caged animals that are sometimes treated kindly but always disciplined when the husband, father, brother, or for that matter ANY male, feels they’ve been disobedient or that they’ve dishonored the family.  And if a woman dishonors her family, and this means something as simple as dating a non-muslim or just talking to one, sharia law says to kill them but that NO punishment will be adjudicated to the killer.

Talk about unequal protection under the law!

Most muslims come to America to leave behind the discriminatory and barbaric laws imposed upon them under sharia.  So why then would our courts want to subject any muslim, especially muslim women, living here to sharia law, because by doing so they are actually violating the principles upon which America was founded and upon which we as a free people live.

Why...that answer is simple...it’s because we have Barack Hussein Obama for president is why.  This man tramples on our Constitutional law while condoning the principals of sharia, and as such has allowed groups like CAIR to file frivolous law suits and to dictate to us how we are to interpret OUR Constitution so that it fits their backwards and brutal way of life.

CAIR, and other groups of their kind, are using OUR Constitution against ‘We the People’ as this president sits back and does nothing for the bottom line is that he wants our beloved America to become an islamic caliphate with himself as leader.  After all he is one of them.

Just another reason why Barack Hussein Obama MUST be voted out of office this November.