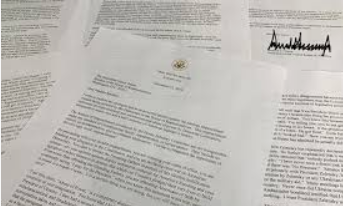 Email ThisBlogThis!Share to TwitterShare to FacebookShare to Pinterest
Collins: Democrats Repeatedly Talk About a So-Called Crime But We Have Yet to Hear What That Crime Is
Beth Baumann / Townhall

House Judiciary Committee Ranking Member Doug Collins (R-GA) on Tuesday blasted Democrats for their repeated talks about President Donald Trump supposedly committing a crime yet they can't name what the specific crime is.

"Look, we can have plenty of time to talk about the very vague articles that we did. It's interesting. If you read the report from the majority, there's a lot of discussion about crimes but they couldn't find it themselves to charge one," a puzzled Collins explained during a Rules Committee meeting. "Again, common sense. Articles, when we think about impeaching a president in particular, for crimes.... This majority has tried so hard to be like Clinton and Nixon and failed so miserably."

A sinister project now advancing under cover of darkness. “The Ground Zero Mosque Project Is Back,” by Pamela Geller, American Thinker, December 16, 2019: The news was buried under two dense paragraphs and five large photos in an article in New York YIMBY about a different project: “Construction has also yet to begin on 51 […]
Read in browser »
Posted by Diane Sori at 8:31 AM No comments:

The FBI’s submission to the court made assertions that were “inaccurate, incomplete, or unsupported by appropriate documentation,” the report said.

“A secretive federal court accused the F.B.I. on Tuesday of misleading it about the factual basis for wiretapping a former Trump campaign adviser and ordered the bureau to propose changes in how investigators seek permission for some national security surveillance,” reports the New York Times.

Read entire article here: https://gellerreport.com/2019/12/fisa-slams-fbi.html/
Posted by Diane Sori at 8:27 AM No comments:

Email ThisBlogThis!Share to TwitterShare to FacebookShare to Pinterest
RIGHT SIDE PATRIOTS...for those who missed last night's show or just want to listen in again...where Craig Andresen and Diane Sori discussed 'A Political Upheaval in the Making'; 'Liberals and the Abyss of the Three D's'; and other important news of the day...you can listen to it (and previous shows) at your convenience on our PodBean hosting/archive site. Click here: https://rightsidepatriots.podbean.com/ to go directly to our podcasts and hope you become 'followers' of RIGHT SIDE PATRIOTS. And our podcasts are now also on Spotify at: https://open.spotify.com/show/2ZfPSVcjon4DhpHcuAl3BT?si=R6DsTh1uQE2Rejlj2ACKkw

Posted by Diane Sori at 7:05 AM No comments: