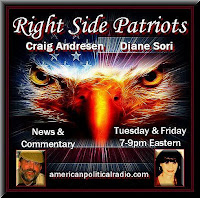 
Today, Tuesday February 12th, from 7 to 9pm EST on American Political Radio, RIGHT SIDE PATRIOTS Craig Andresen and Diane Sori discuss 'A Blueprint For Stupidity Exposed'; 'A Very Bad Week For Liberals'; and important news of the day.

“Today I think is a really big day for our economy, the labor movement, the social-justice movement, indigenous peoples and people all over the United States of America, because today is the day that we truly embark on a comprehensive agenda of economic, social and racial justice.”
- Rep. Alexandria Ocasio-Cortez on last Thursday's unveiling of her “Green New Deal”

Source: AP Photo/Ross D. Franklin
It’s that time, folks. The census is upon us. In 2020, the survey about our country and who lives in it that’s issued every decade will be conducted. The Trump White House wants the citizenship question to be included for the first time since 1950. You can guess how the Left reacted when they heard about this development. You bet they challenged it in court. In January, the federal judge in January ruled that the question was unlawful and needed to be removed. Now, a federal judge for the District Court of D.C. refused to block the citizenship question on privacy grounds. The New York decision is pending appeal to the U.S. Supreme Court (via The Hill):


The Court will deny the plaintiff’s motion for a preliminary injunction,” wrote Judge Dabney L. Friedrich.

Iranian official says Iran can now build nukes, “having nuclear authority is vital to confront US and its allies”
By Robert Spencer / Jihad Watch

The establishment media will claim that the Iranian nuclear deal had put a stop to all this, and blame Trump for withdrawing from it, but actually spokesmen for the Islamic Republic were talking this way while it was in force as well. “Iran Claims to Have Formula for Nuclear Bomb,” by Adam Kredo, Washington Free […]
Read in browser »

My French conservative readers were laughing at Ocasio-Cortez’s Green New Deal, until they read this…

I was telling my French readers about AOC’s crazy Green New Deal on a French-speaking political media.


Even in Socialist France, where people suffer daily from “social justice”; where the government confiscates every month 50% of their pay check; where they pay 18% VAT and their tax return with what they have left; where 10% of the people, 25% of the youth is unemployed – and when they are lucky to find a job, it’s never in the field they studied for; where health care costs three times more than in the US – but they emphasize that it’s free because it’s painlessly taken out of their paycheck – and refund only 70% of the cost, with poor service and cases where costly treatments are refused; even there, they consider AOC as a total lunatic, and a useful idiot to make believe that Socialism is eccentric when it actually is lethal.

Read entire article here: https://gellerreport.com/2019/02/my-french-conservative-readers-were-laughing-at-ocasio-cortezs-green-new-deal-until-they-read-this.html/
Posted by Diane Sori at 7:46 AM No comments:

TRUMP HOLDS RALLY IN EL PASO, TEXAS AMID BORDER WALL DEBATE: President Trump held his first campaign rally Monday night in El Paso, Texas; meanwhile, Beto O’Rourke led a border wall protest about a half-mile away to counter Trump's rally … Trump’s event was held at the El Paso County Coliseum in the town that sits along the U.S.-Mexico border.
Trump did not mention the nearby rally. but brought up O’Rourke. The “young man” with a “great name” who “challenged us,” the president said in reference to the three-term Congressman whose hometown is El Paso. O’Rourke said El Paso is “one of the safest cities in America – safe not because of wall but in spite of walls.”
The president announced his rally last week during his second State of the Union address, in which he alleged El Paso is now one of the nation's safest cities because of a "powerful barrier" that was put in place — a claim that others disputed.