Rouhani: We brought debacle of “Iranophobia project” through nuclear deal

“We triumphantly brought the debacle of Iranophobia project during historic nuclear deal with the west; the world public now clearly accepts that the Zionist Regime was false in its claims that Iran was a threat to the globe.” Those who are in power around the world, at least, accept that Islam poses no threat to […]

He would sooner see Americans slaughtered than oppose jihadic doctrine.

This is dipping well into cover-up mode. This is beyond simple tampering with intelligence. Once records are being deleted, that’s a coverup.


This second set of accusations, which have not been previously reported, were made to the Office of the Director of National Intelligence (ODNI).

They show that the officials charged with overseeing all U.S. intelligence activities were aware, through their own channels, of potential problems with the integrity of information on ISIS, some of which made its way to President Obama.

Former Vice President Dick Cheney wants Donald Trump to get his facts straight. Cheney, who served under President George W. Bush from 2001-2009, sounded off on Trump for claiming that Bush failed to keep Americans safe in the wake of the September 11 terror attacks at Saturday’s GOP debate in South Carolina. Trump then held two press conferences on the campaign trail this weekend in case the press didn’t hear him the first time.

“I lost a lot of friends that were killed in that building,” he told the press. “The worst attack in this country, it was during his presidency.”

Cheney, who knows a thing or two about how Bush acted in the wake of the attacks, unloaded on Trump for attacking his former boss. See video here: http://townhall.com/tipsheet/cortneyobrien/2016/02/16/cheney-calls-trump-a-liberal-democrat-after-bush-911-claims-n2120158?utm_source=thdailypm&utm_medium=email&utm_campaign=nl_pm&newsletterad=

“He sounds like a liberal Democrat to me,” Cheney told Bret Baier on Monday. “He’s wrong and I think he is deliberately promoting those views in order to advance his political interests.”

The former vice president then dismissed several of Trump’s specific notions. He insisted the Bush administration did not lie about believing Iraq had weapons of mass destruction and scoffed at the idea the president failed to act before 9/11. The White House had “no actionable intelligence” at that point to suggest there was a serious threat, he said, adding that, following the attack, Bush put in place surveillance programs that provided important national security information.

Mark Levin Unloads: Trump Is "Pretty Damn Close" to Sounding Like a 9/11 Truther

After the conclusion of the GOP presidential debate on Saturday, which was hosted by CBS News, I described Donald Trump's performance as unhinged, angry and liberal after he praised Planned Parenthood and accused President George W. Bush of lying about the Iraq war.

"Ladies and gentlemen, this is why I posted on my Facebook page 'This guy sounds like CodePink!'"

"He sounds like a radical kook," Levin continued. "All the rest aside, I know too many gold star families who lost sons over there to hear this 9/11 truther crap which is pretty close to it. Pretty damn close to it."

Today, Wednesday, February 17th from 2 to 4pm EST, Right Side Patriots Craig Andresen and Diane Sori discuss why Obama must not be allowed to appoint a justice to fill the vacancy left by Antonin Scalia's sudden passing; why we must choose our next president more wisely than ever before; and who the winners and losers were in last Saturday's Republican debate.

Hope you can tune in at: www.americanpbn.com
And chat with us live at:  https://www.facebook.com/groups/apbnetwork/?__mref=message_bubble 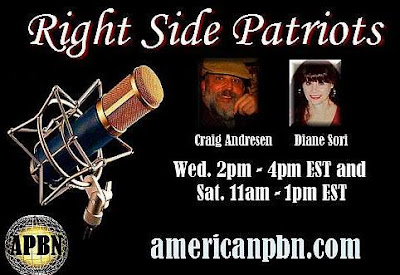