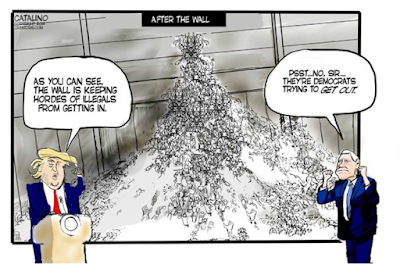 While we all sink our teeth into immigration, the fallout from the Democrats’ failed governmentshutdown, and this New York Times story that Trump wanted to fire Mueller last June—he didn’t, by the way—you’re missing the fight between House Republicans, the FBI, and the Department of Justice over this FISA memo. The four-page document details alleged abuses that are said to be akin to the activities of the KGB. Some lawmakers said it could lead to deep changes within the DOJ. Democrats have pushed back saying it’s a political stunt, aimed at undermining the credibility of the FBI. There’s speculation that the Obama administration used the unverified Trump dossier as the basis to secure FISA warrants to spy on members of the Trump campaign and transition team. The dossier was funded by the Hillary campaign. They hired Fusion GPS, a research firm, who in turn contracted an ex-MI6 operative to get information on Donald Trump. In all, it’s a lucrative opposition research file, most of which cannot be corroborated. The DOJ has been adamant that they review the memo before it’s release to prevent a reckless disclosure of information. The House GOP response has pretty much been to tell the DOJ/FBI to shove it. They’re not allowing them to read the memo. As of right now, this memo could be released next week (via Fox News):


Republicans appear to be proceeding with the release of a much-hyped memo that purportedly reveals government surveillance abuse -- despite Justice Department officials describing such a move as “extraordinarily reckless.”

The hijrah continues to be escorted into Europe by the United Nations, which has signaled to Europe that whatever the price-tag, whatever the cost — including mass rapes, violent no-go zones, jihad attacks and other abuses — European citizens must accommodate Muslim migrants and expect more to flow in. United Nations refugee chief Filippo Grandi […]
Read in browser »

You can see how disturbed Strzok and Page were by the prospect of a special prosecutor for the Clintons in 2016. And still, one has not been appointed. This is long overdue. The Democrats have been persecuting Trump on fictional, absurd accusations — one year later they have those charges of collusion with Russia that have proved to be completely baseless, yet instead of dropping the matter, in what can only be described as a Kafkaesque turn of events, they are now considering obstruction of justice charges in a case with no crime.

(CNN)New excerpts of text exchanges between FBI officials Peter Strzok and Lisa Page released Thursday appear to show the two discussing the Hillary Clinton email investigation, including how much manpower they should exert and whether or not a special prosecutor should be brought in.

Read entire article here: https://pamelageller.com/2018/01/fbi-texts-clinton.html/
Posted by Diane Sori at 9:59 AM No comments:

Email ThisBlogThis!Share to TwitterShare to FacebookShare to Pinterest
RIGHT SIDE PATRIOTS...for those who missed last night's show (or who just want to listen in again) where Craig Andresen and Diane Sori discussed DREAMers and the government shutdown; Schiff, Feinstein, and the FISA memo; and President Trump's triumphant economic trip to Davos...you can listen to it at your convenience on SoundCloud at: https://soundcloud.com/right-side-patriots-260798913/rsp-arch-1-26-18