Benghazi: A Dereliction of Duty

Dereliction
1. Willful neglect, as of duty or principle.
2. a. The act of abandoning; abandonment.
b. A state of abandonment or neglect.

Within two hours of the attack on the American Consulate in Benghazi, Libya on September 11, 2012, that resulted in the death of Ambassador Chris Stevens and three other Americans, an email was sent to the White House and State Department.

That first email was sent at 4:05 PM-ET (10:05 PM in Benghazi) and specifically mentioned that the Libyan group called Ansar al-Sharia, an al-Qaeda affiliated group, had claimed responsibility for the attacks. Fox News confirms that the addresses on the email included "a variety of national security platforms, whose addresses have been redacted, including the White House Situation Room, the Pentagon, the FBI and the Director of National Intelligence."

Two more emails were sent within the next two hours.

Yet, no action was taken to mobilize special operations forces or the significant military resources available in the region. The next morning, the President referred to the attack and other events against U.S. installations by radical Islamists as "bumps in the road."

In the six weeks since the assassinations in Benghazi, more questions than answers have emerged.

Why did the President and his administration deny any link to Islamist terror groups for weeks, promoting instead a false "spontaneous event" explanation?

Why did the Obama administration reject numerous requests for additional security by Ambassador Stevens and others for months before the attacks?

Why was the Embassy request for an extension of the 16 member Special Operations Security Team to remain in Libya to protect the Ambassador denied just a month before the attack?

And many, many more.

But to that list we must now add: Was there a dereliction of duty? Was there a willful neglect of duty, an abandonment of Ambassador Stevens and his staff? If so, why?

Here's a detailed timeline published by Reuters of the email exchanges on that fateful night of September 11:


The first email, timed at 4:05 p.m. Washington time - or 10:05 p.m. Benghazi time, 20-30 minutes after the attack on the U.S. diplomatic mission allegedly began - carried the subject line "U.S. Diplomatic Mission in Benghazi Under Attack" and the notation "SBU", meaning "Sensitive But Unclassified."

The text said the State Department's regional security office had reported that the diplomatic mission in Benghazi was "under attack. Embassy in Tripoli reports approximately 20 armed people fired shots; explosions have been heard as well."

The message continued: "Ambassador Stevens, who is currently in Benghazi, and four ... personnel are in the compound safe haven. The 17th of February militia is providing security support."

The message reported: "Embassy Tripoli reports the group claimed responsibility on Facebook and Twitter and has called for an attack on Embassy Tripoli."

While some information identifying recipients of this message was redacted from copies of the messages obtained by Reuters, a government source said that one of the addresses to which the message was sent was the White House Situation Room, the president's secure command post.

Other addressees included intelligence and military units as well as one used by the FBI command center, the source said.

It was not known what other messages were received by agencies in Washington from Libya that day about who might have been behind the attacks.

Intelligence experts caution that initial reports from the scene of any attack or disaster are often inaccurate.

By the morning of September 12, the day after the Benghazi attack, Reuters reported that there were indications that members of both Ansar al-Sharia, a militia based in the Benghazi area, and al Qaeda in the Islamic Maghreb, the North African affiliate of al Qaeda's faltering central command, may have been involved in organizing the attacks.

Unemployment: Since Obama Took Office, Florida Has Lost 86,500 Jobs And The Unemployment Rate Has Remained Unchanged At 8.7 Percent. (Bureau of Labor Statistics, Accessed 10/24/12)

•Florida's Unemployment Rate Isn't Expected To Fall Below 7 Percent Until 2016. "Florida's unemployment rate will probably not fall below 7 percent until 2016, and will be higher than the national unemployment rate until 2018." (Toluse Olorunnipa, "Economists: Florida Jobless Rate To Remain Bleak," The Miami Herald, 7/23/12)

According To The Economic Estimating Conference, Florida's Jobs Picture Will Remain Bleak Through 2016. "Florida's unemployment rate probably won't change much between now and the end of the year, and the jobs picture is set to remain bleak through 2016, a team of state economists said Monday." (Toluse Olorunnipa, "Economists: Florida Jobless Rate To Remain Bleak," The Miami Herald, 7/23/12)

•Florida's Unemployment Rate Isn't Expected To Fall Below 7 Percent Until 2016. "Florida's unemployment rate will probably not fall below 7 percent until 2016, and will be higher than the national unemployment rate until 2018." (Toluse Olorunnipa, "Economists: Florida Jobless Rate To Remain Bleak," The Miami Herald, 7/23/12)

•Florida's Median Household Income Dropped 2.9 Percent Last Year, A Sharp Reminder Of The State's "Deflated Economy." "The income of the typical Florida family dropped 2.9 percent last year, one of the sharpest reminders that the Sunshine State's deflated economy remains mired in unemployment and lower-wage jobs. The decline means we will be financially challenged if we hope to spend our way out of this state's problems." (Robert Trigaux, "Florida's Household Income Slips, Signaling Tougher Recovery Ahead," Tampa Bay Times, 9/21/12)

Email ThisBlogThis!Share to TwitterShare to FacebookShare to Pinterest
Op-ed:
Lies, cover-ups and treason 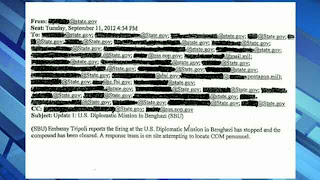 The Libya fiasco grows deeper and more deceitful by the day.  And now e-mails have surfaced proving this While House knew that the assault in Benghazi was indeed a terrorist attack, and they knew it within two hours of the outbreak of violence.

Leaked information shows that while the attack was actually in progress, with this being a two-pronged attack on two buildings lasting over six hours, an islamic militant group sent e-mails to over 400 people in our government claiming credit for the attack.

Cutting to the chase...this administration knew immediately that this was NOT a protest over a YouTube video (as Barack HUSSEIN Obama and his cohorts kept bloviating for over two weeks), and yet they willingly and knowingly sat back and did NOTHING as four Americans were brutally and barbarically slaughtered!

I call that accessory to murder!

The e-mails, leaked from a government source to FOX News who broke the story on Tuesday night, clearly show the Libyan group ‘Ansar al-Sharia’ (with direct ties to al-Qaeda) claiming responsibility for the attacks while they were still going on.  While they were still going on...and to make matters worse, the e-mails also show how our people described the attack as it was happening in real time, and sent that information to Washington, including to the White House Situation Room...meaning to Obama.

And Washington and Obama did NOTHING to help the Ambassador and the others knowing they were under attack.  Oh wait, they did do something...they LIED!   Obama and his administration deliberately lied to ‘We the People’ in an effort to get us to believe that the attack was a random act triggered by a video critical of islam to cover their asses for doing NOTHING!

Gee I wonder...what if this had been Americans attacking muslims would the Obama administration have acted...NO need to wonder as I know the answer to that one...as do you.

Here’s ‘NOT OPTIMAL’ for Obama and his partner in this crime, Hillary Clinton...here’s something the American people MUST know...the two Navy SEALS trying to save Ambassador Stevens and Information Officer Sean Smith were found dead caked in their own blood!  They were caked in their own blood when all could have been saved by the US aircraft carrier stationed 480 miles off the coast that could have dispatched troops and aircraft to defend our consulate in plenty of time.  In plenty of time yet told to stand down with the excuse that they needed permission to fly over Libyan airspace and that couldn’t be had in time to save anyone.

But just in case Obama’s forgotten Commander-in-Chief Lesson 101 let me go over it here for him... when our people are in trouble permission to fly over, or permission for anything is NOT needed...EVER!  And when a US Consulate is attacked anywhere in the world this is paramount to America itself being attacked, and that, oh clueless one, is an outright ACT OF WAR!

But hey, with the election coming up Benghazi became just another ‘bump in the road’ as Barack HUSSEIN Obama flew off to Vegas the very next day to fund raise, ignoring the deaths of our Ambassador and the others while his people concocted the cover story about a YouTube video.

And then when it came time to investigate the attack Obama sent the FBI instead of military investigators, and stationed a destroyer rather than an amphibious aircraft carrier full of Marines off the coast of Libya.

As former Ambassador John Bolton said about the e-mails, “these emails say to me that if anybody at the White House thought they could cover this story up by referring to the mohammad video with this documentary evidence in real time, then it wasn’t just a cover up. It was an incredibly stupid cover up.”

A stupid cover-up to be sure.  This newly surfaced evidence incriminates Obama, Hillary, Susan Rice and all the others who deliberately and with malice tried to wash away the blood on their hands by lying and changing their story over and over again to cover-up gross negligence and incompetence.

And the e-mails say it all.  The e-mails sent at 4:05 p.m. ET with the subject line: "U.S. Diplomatic Mission in Benghazi Under Attack (SBU)" tell the true story.

"The Regional Security Officer reports the diplomatic mission is under attack," the e-mail reads.

"Embassy Tripoli reports approximately 20 armed people fired shots; explosions have been heard as well.  Ambassador Stevens, who is currently in Benghazi and four COM personnel are in the compound safe haven.  The 17th of February militia is providing security support.

"The operations Center will provide updates as available."

At this time Ambassador Stevens and the others were still alive.

The message reported: "Embassy Tripoli reports the group claimed responsibility on Facebook and Twitter and has called for an attack on Embassy Tripoli."

And that was it as we all know the outcome.

And now we have Hillary saying these e-mails, now being posted all over the internet by people like us who are trying to get the truth out, were NOT in and of themselves proof of terrorist involvement, saying claims of responsibility on Facebook and Twitter were not "evidence."

"Posting something on Facebook is not in and of itself evidence," Clinton continued.  "And I think it just underscores how fluid the reporting was at the time and continued for some time to be."

BULLSH*T!!!  Lying about MURDER at our consulate does NOT underscore fluid reporting but is treason against 'We the People' as far a I'm concerned.

Bottom line...this administration did NOTHING to save Ambassador Stevens and the others even when they knew they were in trouble and while there was still time to save them.  And they knew this was a terrorist attack because they were told it was by the people doing it!

And while this is my opinion and mine alone, the murders of our people MUST be avenged.  Time for useless diplomacy is over...the times of lies and cover-ups is over.  I say immediately shock and awe the whole freakin' bunch of them...inflict as much collateral damage as possible and make them BEG, and I mean BEG, for us to stop!  Enough of this muslim bullsh*t...enough!