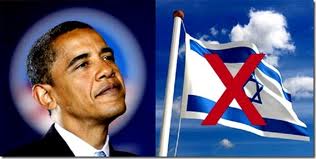 Am I mad...NO, I’m way beyond mad, I’m all the way into outright seething!
Yesterday, the White House confirmed that Israeli Prime Minister Benjamin Netanyahu has been DENIED...YES DENIED...a meeting with Obama when he comes to the US for the opening of the next UN General Assembly at the end of this month.  Barack HUSSEIN Obama says he has NO time to meet with the Israeli Prime Minister, that his schedule does NOT allow it.
This gives new meaning to stabbing our ally and friend Israel in the back.
If this deliberate calculated snub is not proof positive as to where Barack HUSSEIN Obama’s loyalties lie then I don’t know what is.  Remember page 260 in The Audacity of Hope, "I will stand with the muslims should the political winds shift in an ugly direction.”  This Barack HUSSEIN Obama has clearly done in regards to Israel...on this he speaks his ugly truth.
And for this abomination to be announced yesterday, September 11th, the very day we mourn, remember, and honor the 3000 Americans murdered by those that are now threatening Israel’s very existence, this is a hard slap in the face to all who lost their lives that day and to those they left behind.
Speaking on Obama's behalf, a White House spokesperson said Obama can’t see or understand what the big deal is as he can communicate with Netanyahu anytime.  But NOT in person, NOT face to face, and NOT when you’re facing the imminent game changing decision Israel is facing.  So what’s the big deal...Iran is the big deal!
This announcement heralds a new low between Netanyahu and Obama, and comes a little too conveniently close behind Netanyahu’s all out verbal assault on Obama’s position on the Iranian nuclear program.
By saying, "The world tells Israel 'wait, there's still time'.  And I say, 'Wait for what? Wait until when?  Those in the international community who refuse to put red lines before Iran don't have a moral right to place a red light before Israel," Netanyahu surely called Obama to task, and Obama, who can’t take what he so loves to dish out, continues making excuse after excuse for Iran.
Barack HUSSEIN Obama, the man whose party platform denied God and Jerusalem at the DNC convention...denied God and Jerusalem and then put them back into the platform only after the political tide turned against him...Barack HUSSEIN Obama, the man who bows down to Saudi Kings, the man who gives Iran a mere slap on the wrist with useless sanctions...that man who has just showed the world where he truly stands in regards to Israel.  This Godless man refuses to meet Netanyahu because it’s a simple fact that Barack HUSSEIN Obama does NOT side with Israel...Obama unabashedly sides with his muslim brethren.
Wiping Israel off the map is something Barack HUSSEIN Obama would have NO problem with...he’ll just let others do the job for him.
"Now if Iran knows that there is no red line.  If Iran knows that there is no deadline, what will it do?  Exactly what it's doing.  It's continuing, without any interference, towards obtaining nuclear weapons capability and from there, nuclear bombs," Netanyahu continued, driving home the fact that thanks to Barack HUSSEIN Obama, Israel now stands alone.
And to add insult to injury on this same day that he handed Netanyahu to the wolves, Obama broke his promise NOT to campaign on September 11th.  Obama deliberately dishonored his pledge by issuing a formal salutation on the White House YouTube channel to the Arab Forum on Asset Recovery, and did so with NO mention of it being September 11th.
Barack HUSSEN Obama catered to those out to kill us on our nation’s darkest day as he knowingly dug the knife deeper into Israel’s heart.
And while Israel might stand alone as far as Barack HUSSEIN Obama is concerned, Israel can rest assured that ‘We the People’ stand united with her...always.
November 6th can’t come soon enough, both for America and for Israel's very survival.
Posted by Diane Sori at 12:07 AM 4 comments: