US to Supply Kurds with Russian Arms via CIA

The story in Iraq gets more bizarre by the day. Kurdish territory in Iraq isthe only pro-American territory left. Yet the US worries it will splinter off into Kuridistan. Apparently it's better to have a raging civil war as long as the country stays together in one theoretical piece.

This is where the story gets really bizarre. To avoid the appearance of the US giving arms to the Kurds, instead the US will give the Kurds Russian-made arms via the CIA.

Excuse me for asking, but what about sanctions on Russia?

While pondering that question, please consider US to directly arm Kurdish peshmerga forces in bid to thwart Isis offensive.


The Obama administration has announced it will arm the militia forces of Iraqi Kurdistan, to prevent the fall of the final bastion of pro-US territory in Iraq.

The weaponry is said to be light arms and ammunition, brokered not through the department of defense – which supplies Baghdad and its security forces with heavy weaponry – but the Central Intelligence Agency, which is better positioned to supply the Kurdish peshmerga with Russian-made guns like AK-47s that the US military does not use.

The idea of arming the Kurds has been the subject of weeks of internal deliberation and official silence by Barack Obama’s foreign policy advisers. It is a fateful step in Iraq’s current crisis, one that risks facilitating the long-term disintegration of Iraq. Several administrations over decades have refrained from arming the peshmerga due to concerns about reprisals from Saddam Hussein and his successors. US officials have demurred for days when asked about the deliberations.

The danger is that arming the peshmerga will facilitate a permanent fragmentation of Iraq, something the Kurds consider a national aspiration. Several disputed and multi-ethnic cities in northern Iraq complicate any peaceful cleavage, as do major oil holdings in both Kurdish and contested territory. The Peshmerga used the June disintegration of Iraqi Army forces running from Isis as an opportunity to seize disputed areas like oil-rich Kirkuk.

Heaven forbid a stable pro-US country with oil reserves might come out of this. Who could possibly want that?
Posted by Diane Sori at 10:49 AM No comments:

Much of the US aid to Yazidis “useless” because it was dropped from 15,000ft without parachutes and exploded on impact

As far as the mainstream media is concerned, this doesn’t matter. The only thing that matters is that Barack Obama is made to appear as if he is doing something for the Yazidis and against the Islamic State. That he actually do something effective is not required. “Iraq crisis: ‘It is death valley. Up to 70 per cent of them are dead,’” by Jonathan Krohn, the Telegraph, August 10, 2014 (thanks to David):


Mount Sinjar stinks of death. The few Yazidis who have managed to escape its clutches can tell you why. “Dogs were eating the bodies of the dead,” said Haji Khedev Haydev, 65, who ran through the lines of Islamic State jihadists surrounding it.

On Sunday night, I became the first western journalist to reach the mountains where tens of thousands of Yazidis, a previously obscure Middle Eastern sect, have been taking refuge from the Islamic State forces that seized their largest town, Sinjar.

I was on board an Iraqi Army helicopter, and watched as hundreds of refugees ran towards it to receive one of the few deliveries of aid to make it to the mountain. The helicopter dropped water and food from its open gun bays to them as they waited below. General Ahmed Ithwany, who led the mission, told me: “It is death valley. Up to 70 per cent of them are dead.”

Two American aid flights have also made it to the mountain, where they have dropped off more than 36,000 meals and 7,000 gallons of drinking water to help the refugees, and last night two RAF C-130 transport planes were also on the way.

However, Iraqi officials said that much of the US aid had been “useless” because it was dropped from 15,000ft without parachutes and exploded on impact….

Barack Obama’s Most Cynical Move Yet 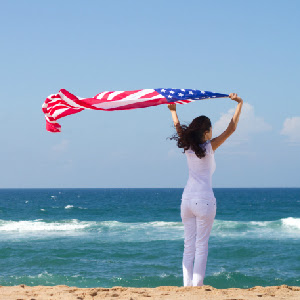 That’s not happening, thanks to the latest trial balloons coming out of the White House. The rumor mills are flying with speculation that before summer is over, Barack Obama will announce one of the most audacious and most cynical moves yet by an Administration that has proven it can be as partisan and mean-spirited as any that’s ever held our Nation’s highest office.

According to the latest speculation, sometime in the next few weeks the President will issue an executive order granting amnesty to as many as 5 million illegal aliens.

He will do this claiming he has been forced to act because those dastardly Republicans in Congress have refused to cooperate with all those kindhearted Democrats in passing an immigration bill.

But the real purpose behind this Democratic ploy will be to enrage the Republicans who control the House of Representatives and get them to bring impeachment charges against the President.

Could Democratic strategists actually be this cynical? Absolutely. As they see it, such a ploy would have three major benefits for the Administration:
In the past, Obama has admitted that he lacks the Constitutional authority to do anything like this. For example, three years ago, on July 25, 2011, he said: “I swore an oath to uphold the laws on the books… Now, I know some people want me to bypass Congress and change the [immigration] laws on my own… That’s not how our Constitution is written.”

Three months later, on Sept. 28, 2011, he repeated that message: “This notion that somehow I can just change the laws unilaterally is just not true… There are laws on the books that I have to enforce.”

And on Nov. 25, 2013, the President said: “If, in fact, I could solve all these problems without passing laws in Congress, then I would do so. But we’re also a nation of laws.”

Yes, we are. Or at least we’re supposed to be. As Fox News commentator Charles Krauthammer pointed out in his syndicated column: “Laws created by Congress, not by executive fiat. That’s what distinguishes a Constitutional Republic from the banana kind.”

Krauthammer wrote: “An executive order so sweeping and egregiously lawless would be impeachment bait. It would undoubtedly provoke a Constitutional crisis.”

Indeed it would. But some knowledgeable observers believe that is a price that Obama and his advisers are willing to pay to avoid sweeping defeats in the coming midterm elections.

Batten down the hatches, folks. If these rumors are right, the politic scene is about to get a whole lot nastier.

Until next time, keep some powder dry.
Posted by Diane Sori at 9:13 AM No comments:

US Official: US Arming Kurdish Forces in Iraq

Over the weekend, President Obama announced he had authorized additional and targeted air strikes in northern Iraq, and would continue providing humanitarian relief. Both efforts, he argued, were necessary to protect the region’s ethnic minority population from being massacred or succumbing to the elements.

And yet, in the long-term, perhaps the most effective strategy to stem the tide of bloodshed in northern Iraq (save from putting American boots on the ground) is to provide the Kurds with the arms and weapons necessary to turn the tide of the war. And that, in turn, is exactly what the US is reportedly now doing:


The United States is sending weapons to Kurdish forces in Iraq who have begun to roll back gains made by Sunni militants, a senior U.S. official confirmed to Fox News. A senior State Department official told The Associated Press that the Kurds are "getting arms from various sources. They are being rearmed."

Providing weapons to Kurdish forces is a reversal of U.S. policy, which previously had only allowed for selling arms directly to the Iraqi government. In recent days, the U.S. military has been helping facilitate weapons deliveries from the Iraqis to the Kurds, providing logistical assistance and transportation to the north.

Sources say the weapons from the U.S. will not be provided directly from the Pentagon.

Officials wouldn't say which agency is spearheading the effort, though the CIA historically has done similar arming operations.


The situation in Iraq, meanwhile, is becoming increasingly more complicated given the nation’s political instability. Prime Minister Nuri al-Maliki, for his part, is unwilling to relinquish the reins of power, or so it seems, taking steps to bolster and solidify his position in what many are now describing as a political coup. As alarming as that prospect might sound, however, it may, in a sense, be welcome news in Washington:

But it isn't enough to merely "abandon Maliki." The U.S. must also stand firmly behind the country’s newly elected president to begin loosening ISIS' foothold in Iraq -- which, as it happens, is exactly what the State Department is already doing (via Ed Morrissey):


Masum's election on Thursday is another step towards forming a government which could see the embattled Maliki replaced as prime minister, even though his party won the largest bloc in April parliamentary elections. "We stand absolutely squarely behind President Masum (who) has the responsibility for upholding the constitution of Iraq," Kerry said in Sydney, where he will attend annual US-Australia military talks.

"He is the elected president and at this moment Iraq clearly made a statement that they are looking for change."

Maliki, who has been under huge pressure to give up his bid for a third term in office, announced his plans to file a complaint to the federal court in a surprise address at 2100 GMT Sunday.

On Sunday, the Kurds pushed back ISIS militants a few dozen miles from the city of Irbil, and recaptured two towns in Northern Iraq. Thus, U.S. strategic and military efforts seem, at least for the moment, to be making an impact. 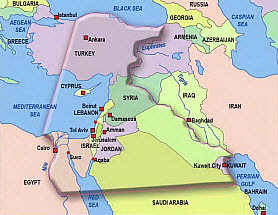 The fact of the matter is clear, the political landscape regarding the current and protracted situation between Israel and the “Palestinians” is greatly different than the biblical landscape, set forth in Genesis, where it comes to the borders OF Israel.

“From the Nile river (which is mainly modern Egypt and Sudan) to the Euphrates (modern-day Iraq).”

Since its inception in 1948, Israel has never been in the business of conquering other nations, never insisted on the biblical borders and instead, only wanted to live in peace. A peace often interrupted by the hatred for the Jews by other surrounding entities but Israel, having never let down her guard, has repelled all such incursions and has, in fact, sought peace through the giving up pieces of what little land she has.

Today, all Israel wants are the borders drawn after the 1967 war, a war she did not start but a war she won and to be left alone to exist in the world as a Jewish nation.

To understand the dynamics at hand and arrive at a viable solution, we must first break down the entities involved.

In part one of this investigative series, Diane Sori of The Patriot Factor provided crucial insight into the real position of Jordan and Jordan’s King. Trust me, we’re not done exploring Jordan’s role on all of this but, more on that later.

Click on link to read full article:
http://www.thenationalpatriot.com/2014/08/11/israels-allies-and-enemies-the-truth-exposedpart-2/
Posted by Diane Sori at 12:03 AM No comments: