ISIS has burned alive the Jordanian pilot they held. This has been confirmed by the Jordanian government.  You can see the full-length ISIS produced video here on Craig and my new RIGHT SIDE PATRIOTS website  http://rightsidepatriots.my-free.website/home  Click the video button and it's there...first video.

And yet even after this horrific act Barack HUSSEIN Obama is standing by his statement that we're "overinflating the threat of terrorist groups"...and he still refuses to call these ISIS savages what they are...muslim islamic terrorists.

Please, while the video is graphic, outright horrific, and NOT for the squeamish, it must be seen so everyone understands the dangers we are facing, because if we do NOT stop it 'over there' it will be here next.

Again...here is the link http://rightsidepatriots.my-free.website/home and after you've viewed it say a prayer for this man and his family because what happened to him will be our fate if people do NOT wake-up...and WAKE-UP NOW!

A still from the video: 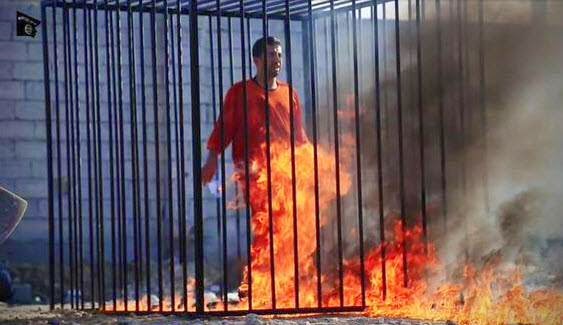 Posted by Diane Sori at 4:11 PM No comments:

We recently passed the gruesome milestone of over 25,000 deadly Islamic attacks since 911.

Posturing as champion of needed public investments and fairness, President Obama wants new taxes on the overseas earnings of American businesses. That would kill jobs and punish retired Americans.

Although special deals permit some corporations to pay low taxes, most pay a heavy burden. The estimated effective U.S. corporate tax rate is about 27 percent, and well above the 20 percent imposed by other industrialized countries.

The United States is virtually alone by taxing the overseas profits of its multinationals when those are repatriated. This has encouraged U.S. firms to invest nearly $2.1 trillion of their earnings abroad, instead of bringing some of that money home to create jobs in America.

Now the president wants an immediate 14 percent tax levy on those assets to raise about $500 billion and to impose a 19 percent tax on future earnings to finance infrastructure investments.

Much of the $2.1 trillion in non-repatriated corporate overseas profits is not parked in foreign bank accounts. Rather, it is already invested by firms like GE and Procter and Gamble in countries where cost considerations, trade barriers and government-managed exchange rates require American companies to produce locally to sell in those markets.

Those investments cannot be readily liquidated to pony up $500 billion in new taxes. Instead, CEOs would siphon off cash needed for new projects here in the United States, and the new levies would severely damage the finances of firms like General Motors and Microsoft. All this would curtail R&D and new product rollouts needed to maintain the jobs Americans already have -- never mind destroying prospects for adding millions of new jobs.

Local politicians love infrastructure spending -- and remember members of Congress are elected by local constituencies -- because it permits them to throw big contracts to construction and engineering companies and labor unions that provide dollars and foot soldiers for their campaigns.

Getting more dollars for roads, bridges and rail without increasing the 18.4 cents per gallon federal gas tax would surely appeal to members on both sides of the aisle -- but it would not solve some basic problems.

Today, the House of Representatives will vote to fully repeal ObamaCare - the first time that 58 of our newest Members will have a chance to go on the record regarding the law and the first full repeal vote since Republicans took control of the Senate.

Today's vote fulfills a key commitment Republicans made to voters and is a result of the hard work of Republican Study Committee (RSC) Members, who pressed the House to act.

Between now and April 15th, millions of Americans across the country will sit down at their kitchen tables to begin the annual ritual of filing their taxes . With records and receipts in hand, folks will hold their breath as they calculate how much the Internal Revenue Service will dip into their pockets.

The process has never been fun, but this year, thanks to ObamaCare, taxpayers will face new and confusing requirements on top of the already maze-like tax code.

ObamaCare is a mess of penalties, fines, and confusing subsidies, and the IRS is ill-equipped to fully deal with it. Yet when confronted with the law's shortcomings and serious “glitches,” this Administration has simply cherry-picked parts of the law to enforce while unilaterally delaying enforcement of other parts of Obamacare. The uncertainty has paralyzed taxpayers and small businesses who never know when their insurance premiums will skyrocket or coverage will simply end. This is in addition to the well-established fact that millions have lost plans they were promised they could keep and have seen their working hours reduced as employers struggle to comply with the law's complexities.

Unfortunately, the only thing Americans can seem to count on under ObamaCare is a higher tax bill.

The Treasury Department recently admitted that as many as 6 million Americans will be forced to pay a penalty under the law's individual mandate because they did not purchase health insurance.

Treasury also estimates that as many as 30 million more Americans will try in vain to gain an exception to the law. And many families will simply opt to pay the Obamacare penalty, because the one-size-fits-all plans offered by the exchanges are simply unaffordable.

Americans should not be forced to choose between higher taxes or higher healthcare costs. Instead, we need real healthcare reform that puts patients and doctors back in the driver's seat and creates free-market competition to drive down costs. Last year, the RSC proposed healthcare reform legislation that would do exactly that - and garnered more support than any major healthcare reform package since the passage of ObamaCare. This year, we are hard at work refining our plan to serve as a competitive alternative to President Obama's failed big-government solutions.

Today's repeal vote will be the first time newly elected lawmakers can uphold an important promise they made to voters. As members take that vote, it is an unmistakable reminder that the priorities of America's new Congress are not dictated by special interest groups. Instead, our priorities flow from conversations going on around kitchen tables across the country.