Thank You Mr. President
By: Diane Sori / The Patriot Factor

History was made today as Donald Trump became the first sitting U.S. president to visit the Jewish faith's most holy and sacred Western Wall. And for those who wondered if President Trump left a note at the Western Wall...YES he did! What a powerful message this sends to the world...thank you Mr. President. 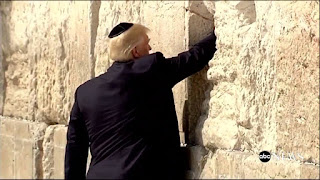 Email ThisBlogThis!Share to TwitterShare to FacebookShare to Pinterest
Video: Trump’s full Saudi speech: “This is a battle between Good and Evil”

Email ThisBlogThis!Share to TwitterShare to FacebookShare to Pinterest
Just a Thought...
The Root Cause of All the Trouble
By: Diane Sori / The Patriot Factor

Email ThisBlogThis!Share to TwitterShare to FacebookShare to Pinterest
Trump to Propose Deep Cuts to Anti-Poverty Programs and Medicaid

President Donald Trump plans to propose $1.7 trillion in cuts to a category of spending that includes major social and entitlement programs for lower-income Americans, as part of an effort to balance the budget within a decade.

The White House will issue a formal budget request Tuesday that includes $274 billion in cuts over 10 years to means-tested anti-poverty programs, including food stamps, according to a Republican congressional aide and a White House document obtained by Bloomberg News.
The administration has prepared talking points for Republicans on Capitol Hill touting that the “budget strives to replace dependency with the dignity of work through welfare reform efforts.”

The upcoming budget request for fiscal 2018, which include dropping the top individual tax rate to 35 percent, is already attracting criticism from Democrats. Trump’s proposal will also call for $800 billion in cuts to Medicaid, the health program for the poor, the Washington Post reported.

“This budget continues to reveal President Trump’s true colors: His populist campaign rhetoric was just a Trojan horse to execute long-held, hard-right policies that benefit the ultra-wealthy at the expense of the middle class,” Senate Minority Leader Chuck Schumer said in a statement Sunday.

Email ThisBlogThis!Share to TwitterShare to FacebookShare to Pinterest
Gen. Keane: Trump Building 'Framework of an Arab NATO' During Mideast Visit

President Donald Trump is building a "framework of an Arab NATO" during his visit to the Middle East, Ret. Gen. Jack Keane told Fox News on Sunday.
"Now we have a President with the Sunni Arabs, with Saudi Arabia, which is Iran's strategic opponent in the Middle East, and we're going to stand up against them," Keane said, adding Trump was building "something like the framework of an Arab NATO (that's) ready to be willing to counter the Iranians because they fully intend to dominate the Middle East."
Keane described Trump's first stop in Saudi Arabia as "quite a seminal event that's taking place here."

The president met with a warm and enthusiastic welcome upon arriving in Saudi Arabia as part of a multi-nation tour. The atmosphere was quite a change from the policies under former President Barack Obama, Keane explained.

"The Sunni Arabs, they've been largely abandoned these last eight years by the Obama administration as it accommodated the Iranians," he said, noting that Obama instead worked with Shiite-majority Iran.

During his trip, Trump is meeting with King Salman of Saudi Arabia, and will also meet with King Hamad of Bahrain, President El-Sisi of Egypt and several other Mideast leaders.
Noting that Iran had been battling for 36 years to dominate the Middle East, Keane said it would take more than arms to eradicate the problem of radical Islamism.

"We can't just shoot our way out of this problem. You have to hold (radical Islamists') horrific behavior accountable," Keane said. "They need U.S. leadership . . . we are a unifying effort here."

Accompanying President Trump’s visit to Saudi Arabia is the endless propaganda about Islam and its tolerance, mercy and peace. Over the weekend, Arab News reported on Saudi King Salman (above) taking President Trump and Melania on an exhibition about tolerance and co-existence among faiths.

And today King Salman lectured the President and the world: “Islam is the religion of mercy and tolerance and co-existence as confirmed by brilliant precedence.” And this was after the Saudis denied visas to several Israeli and Jewish reporters who had been approved by the White House to cover Trump’s historic visit.

Their contempt for the West and the truth is without parallel.

Several Israeli journalists planning to cover President Trump’s visit to the Middle East were denied visas to Saudi Arabia and will not be able to board the press plane.