“No physical findings that support a diagnosis of traumatic asphyxia or strangulation,” the now released official autopsy report stated. Instead it revealed that George Floyd had “underlying health conditions including coronary artery disease and hypertensive heart disease...his underlying health conditions and any potential intoxicants in his system likely contributed to his death,” it went on to state.

And yet they still continue to riot, loot, steal, and set cities on fire, and they started doing so even before the medical examiner had a chance to perform the “priority one” autopsy. Using one man's untimely and unfortunate death as an excuse to not only set their own businesses and homes on fire but to torch government buildings as well, all was being done while in the process of garnering for themselves ill-gotten loot at the expense of one of their own whose memory they have now so dishonored.


Read entire article and see videos here: https://thepatriotfactor.blogspot.com/2020/06/op-ed-what-would-dr.html
Posted by Diane Sori at 8:55 AM No comments:

In a last-minute address to the nation Monday evening, President Donald Trump made it clear he would mobilize all federal resources to reestablish law and order across the country.

"I am mobilizing all available federal resources, civilian and military, to stop the rioting and looting, to end the destruction and arson. And to protect the rights of law-abiding Americans, including your Second Amendment rights," the president said during his address.


Today, Tuesday, June 2nd from 7 to 9pm EST, RIGHT SIDE PATRIOTS Craig Andresen and Diane Sori discuss 'What Would Dr. King Say?'; 'The Mindless Baboonery of Domestic Terrorists'; and important news of the day.

Hope you can tune in to RSP Radio at: https://streamingv2.shoutcast.com/right-side-patriots 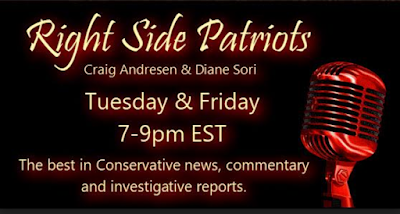