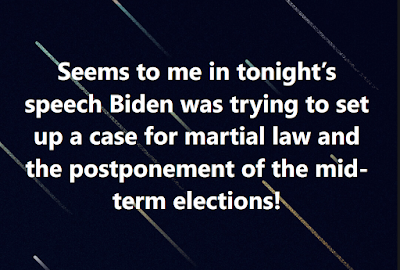 In a brazenly partisan speech delivered in the shadow of Independence Hall in Philadelphia, President Joe Biden had the gall to invoke America's founding — when bold colonists banded together to declare their independence and fought their way out from the grasp of tyranny — while smearing millions of his fellow citizens as radical, unlawful, and hateful individuals.

Despite insistence from White House — including Press Secretary Karine Jean-Pierre and Chief of Staff Ron Klain — earlier on Thursday that Biden's address would not be political and not about one political party or one political person, the president directly named "Donald Trump"and repeatedly invoked "MAGA Republicans" in his remarks.

While speaking in front of an ominous-looking Independence Hall illuminated with dim red lighting and flanked by military guards, Biden accused these MAGA Republicans — who he's recently smeared as "semi-fascists" — of harboring "anger," spreading "chaos," and living in the "shadow of lies." Read more, see videos and tweets here.

Email ThisBlogThis!Share to TwitterShare to FacebookShare to Pinterest
RIGHT SIDE PATRIOTS...LIVE!
Tonight, Friday, September 2nd from 7 to 8:00pm EST, RIGHT SIDE PATRIOTS Craig Andresen and Diane Sori welcome Mudar Zahran, the Secretary General of the Jordanian Opposition Coalition to discuss the current situation in the Middle East. Hope you can tune in to RIGHT SIDE PATRIOTS on https://rspradio1.com. Click 'LISTEN LIVE' starting at 6:50 pm EST with show beginning at 7pm EST.