“Iranian Lawmaker Blames U.S. for Plane Disappearance,” by Thomas Erdbrink for the New York Times, March 11 (thanks to Jerk Chicken):


With the fate and location of the missing Malaysia Airlines jet still unexplained on Tuesday, the police were investigating the possibilities of hijacking, sabotage and possible psychological or personal problems among the crew and passengers, while other agencies in Malaysia continued to investigate noncriminal explanations, as Thomas Fuller, Jane Perlez and Alan Cowell reported.

On Tuesday, an influential Iranian lawmaker accused the United States of having “kidnapped” Flight 370, saying it was an attempt to “sabotage the relationship between Iran and China and South East Asia.”

The parliamentarian, Hossein Naghavi Hosseini, who is the spokesman for the foreign policy committee, responded to the news on Tuesday that two Iranian nationals had been traveling on the missing flight holding stolen passports. This accusation was a “plot,” Mr. Naghavi Hosseini said, according to the Tasnim news agency.

“Documents published by the Western media about two Iranians getting on the plane without passports is psychological warfare. Americans recruit some people for such kinds of operations so they can throw the blame on other countries, especially Muslim countries,” he said….

Posted by Diane Sori at 4:35 PM No comments:

Email ThisBlogThis!Share to TwitterShare to FacebookShare to Pinterest
Obama Is Now Going After Ben Carson’s Friends And Family


On Monday, Dr. Benjamin Carson, the former director of pediatric neurosurgery at Johns Hopkins Hospital, said he and his family were targeted by the IRS in retribution for comments critical of Barack Obama, Newsmax reported.

According to Carson, audits and other harassment began in May or June of 2013, just a few months after his speech at the National Prayer Breakfast. Gradually, he added, the harassment expanded to include family members, associates, and his charitable endeavors.

“I’ve been quite — I would say astonished at the level of hostility that I have encountered,” he told Newsmax TV’s John Bachman.

Until now, Newsmax said, Dr. Carson has shied away from tying the IRS actions to his criticism of Obama, but now he says Americans live “in a Gestapo age” even though they may not realize it.

He also said Congress has to step up to the plate and do its job.

“The reason we have divided government is if one branch of the government gets out of control, starts thinking they’re too big for their britches, you need to be able to have control,” he said.

Unfortunately, Congress as a whole has shown little interest in keeping the administration in check, but a handful of conservative Republicans have spoken out.

Carson told Newsmax this is the first time he’s ever been audited by the IRS.

He also said the agency has targeted his children, but didn’t go into much detail, expressing concern the agency would expand
their probe even further.
Newsmax added:

Email ThisBlogThis!Share to TwitterShare to FacebookShare to Pinterest
IRANIAN General says, “We are just waiting for the order to destroy Israel”

The Air Force commander of Iran’s Revolutionary Guard Corps was quoted by Iran’s Fars news agency as saying, “Iran’s military has its finger on the trigger to destroy Israel as soon as it receives the order.“

Times of Israel via Now the End Begins  In an article headlined “IRGC Commander: Iran’s Finger on Trigger to Destroy Zionist Regime,” Fars wrote that Brigadier General Hossein Salami had declared that Iranian military commanders are prepared to attack and destroy the Zionist regime of Israel as soon as they receive such an order. “Today, we can destroy every spot which is under the Zionist regime’s control with any volume of fire power (that we want) right from here,” Fars quoted Salami as telling a conference in Tehran Tuesday on “The Islamic World’s Role in the Geometry of the World Power.”

“Islam has given us this wish, capacity and power to destroy the Zionist regime so that our hands will remain on the trigger from 1,400 kilometers away for the day when such an incident (confrontation with Israel) takes place,” he was also quoted saying in the speech. 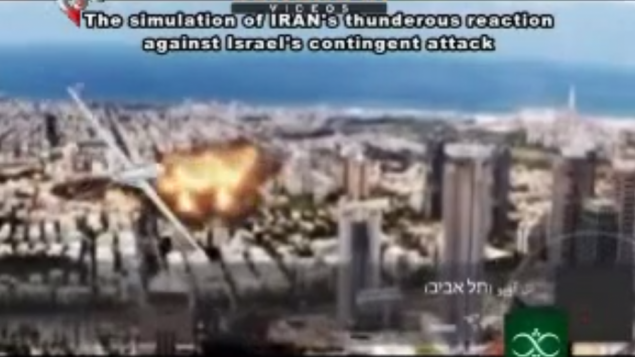 The comments came a day after Israel’s Prime Minister Benjamin Netanyahu presented a shipment of what he said were Iranian arms intercepted at sea last week, which he charged were intended for terror groups in Gaza. Netanyahu castigated the West for clinging to the illusion that Iran had changed, and said it remained relentlessly committed to fostering terrorism and advancing a nuclear weapons program.

Last month, Iranian state TV ran a documentary featuring a computerized video of Iran’s drones and missiles bombing Tel Aviv, Haifa, Ben Gurion Airport and the Dimona nuclear reactor in a hypothetical retaliation for an Israeli or American strike on the Islamic Republic.

Computerized shots of Tel Aviv being bombed by Iran 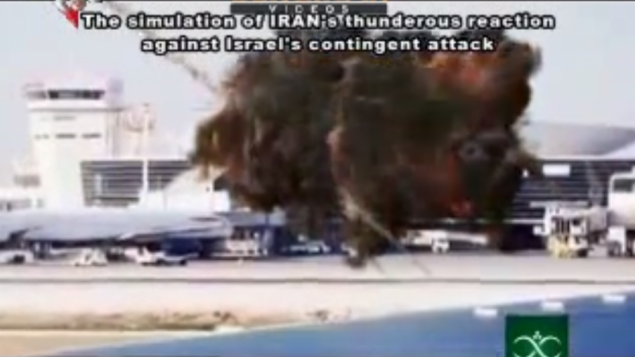 Computerized shots of
Ben Gurion Airport being
bombed by Iran