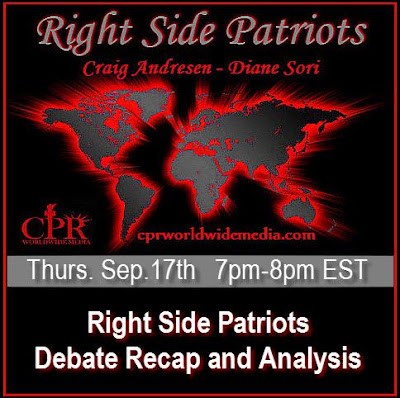 Posted by Diane Sori at 3:40 PM No comments:

In the beginning of the second Republican debate hosted by CNN and Salem Media, the 2016 GOP field was asked if they trusted the current frontrunner, Donald Trump, with nuclear weapons.

Wisconsin Gov. Scott Walker took issue with the line of questioning, claiming it was avoiding a substantive debate on policy. That’s when he decided to tell Mr. Trump that the country doesn’t “need an Apprentice in the White House,” citing the billionaire’s hit television show.

“We don’t need an Apprentice in the White House; we have one right now. He told us all the things we wanted to hear back in 2008. We don’t know who you are or where you’re going. We need someone who can actually get the job done,” said Walker.

“In Wisconsin, you’re losing $2.2 billion right now. I would do so much better than that," retorted Trump.

“Mr. Trump, you’re using the talking points of the Democrats. We all know that failed three times in four-and-half years when I got elected because it is working,” said Walker. “We balanced the budget. You want to talk about balanced budgets; you took four major projects into bankruptcy over and over and over again. You can’t take America into bankruptcy. That’s what’s wrong with the politicians in Washington right now; they think we can take a country into bankruptcy.”

Trump also mentioned Walker’s decline in the polls in Iowa, stating that Iowan caucus-goers found out about his record, and that’s the reason why he “went to number one,” and Walker “went down the tubes.”

“Just because he says it, doesn’t make it true,” Walker responded.

And, yes, some of Mr. Trumps’ business ventures have gone bankrupt. It happens.

Posted by Diane Sori at 3:18 PM No comments:

School officials thought the clock looked like a bomb. It certainly looks more like a bomb than it does like a clock: All over the country, school officials are on constant high alert for weapons — a high alert that has more than once lapsed over into outright hysteria, with students being suspended for drawing […]

Posted by Diane Sori at 3:14 PM No comments:


Nearly half of the 27 Iraqi Christians the Obama administration has been holding for the past six months at an ICE detention center in Otay Mesa, California, are set to be deported in the coming weeks.

Is it any wonder that close to a third of Americans think Obama is a Muslim? Christian and religious minorities are thrown under the bus in Obama’s immigration jihad.

As millions of Syrians flee ISIS tyranny and violence, the Obama administration already is pushing...