Today, the U.S. Department of the Interior announced new details about Salute to America including a flight demonstration by the U.S. Navy Blue Angels and a generous donation of additional fireworks. Salute to America, a part of this year’s annual Independence Day celebration on the National Mall, will feature remarks by President Donald J. Trump to honor America’s armed forces.

“This is going to be a fantastic Fourth of July with increased access across the National Mall for the public to enjoy music, flyovers, a spectacular fireworks display, and an address by our Commander-in-Chief,” said Secretary of the Interior David Bernhardt. “We received an extraordinary donation for a phenomenal fireworks display, and our colleagues from the Department of Defense will be providing a one-of-a-kind music and air power experience including a flight demonstration from the Blue Angels.”

Salute to America will honor each of the nation’s five service branches with music, military demonstrations, multiple flyovers including a flight demonstration by the Blue Angels and much more. Participants include the Old Guard Fife and Drum Corps, the U.S. Army Band (“Pershing’s Own”), the Armed Forces Chorus, the United States Marine Corps Silent Drill Team, and many others.

Author's Note: I have been asked to rerun my July 4rh op-ed from last year...I'm proud to do so.
"When in the Course of human events it becomes necessary for one people to dissolve the political bands which have connected them with another and to assume among the powers of the earth..." and so it began two hundred and forty-two years ago today as the greatest nation the world has ever known was born.

Unanimously approved on July 2nd, 1776, and signed on July 4th by all 56 delegates to the Continental Congress, the colonies now regarded themselves as thirteen newly independent sovereign states...independent states yet united together...and thus a new nation was founded...a Judeo-Christian nation...forever to be known as the United States of America.

Preceded in governance by the Continental Congress...a convention of delegates from each of the thirteen colonies...the Congress met from 1774 to 1789 in three increments, with the first being a call for a convention concerning issues raised about the blockade and the "Intolerable Acts" penalizing Massachusetts. By 1774, Benjamin Franklin was able to convince the colonies to form a representative body, which at first was divided on independence and a break from the Crown. However, in time the new Congress gave their unanimous vote for independence, established a Continental Army, giving command to George Washington.

And while the Continental Congress was waging war with Britain, making a military treaty with France, and funding the war effort with loans and paper money, Richard Henry Lee of Virginia first proposed the idea of succession at the Second Continental Congress. Reading an important resolution that in no uncertain words stated, “Resolved: That these United Colonies are, and of right ought to be, free and independent States, that they are absolved from all allegiance to the British Crown, and that all political connection between them and the State of Great Britain is, and ought to be, totally dissolved.”...the march towards independence began.

This one document alone changed the course of modern history for its ramifications were heard by all "free men of conscious"...men who now truly understood that when their leaders...when their government...becomes both "tyrannical and abusive"...when their leaders dare violate time and again the rights of the people then the people have the right...actually they have the duty...to revolt and put safeguards into place to protect those rights.

And what was this new nation but an experiment in self-government...an experiment in liberty and in the sovereignty of the people...of people who believed that human equality and liberty should be the rule of law not only for those forever to be known as Americans, but for people everywhere "and that they (must) derive their just powers from the consent of the governed,” meaning 'We the People' through the power of the ballot box.

And with the Constitution defining those beliefs, never forget that our independence and our beliefs were secured for all time by those brave men and women whose blood was spilled all those many years ago.

So as we celebrate the day our great nation was born from the pains of protest against a "tyrannical and abusive" king...a nation unseen in the annals of man...a nation exceptional in concept for its being built upon freedom, justice, and equality for all... know that now the time has come where we must stop those perpetrating the conflicts of conscious by those who are trying to divide our great nation...conflicts courtesy of those enemies within coupled with apathy from the masses. And if our beloved America falls...if our Constitution falls...tyranny and turmoil will become the order of the day not just for our homeland but for the world as well.

But thankfully 'ifs' tend to be supposition alone for history has shown that America will survive because America must survive...and no other option must ever be allowed to exist. And while some try to say that what we thought of as our brightest hours were really not as bright as we thought or that our darkest moments were not as dark as we remember them...the pages of history alone will show the truth, but only with the passage of time. And while our nation continues to move forward by hopefully learning from the lessons of the past, the fact remains that certain folks in every generation...especially the youngest and the most idealistic...continue to think of themselves as being under attack from those whose political ideologies are different than their own.

And while of late it seems that we as a nation are always facing or coping with some sort of crisis or another...whether those crises be manufactured from inside our own ranks or from those looking in from the outside...surviving remains the only option afforded to even those of us patriots who sometimes forget the freedoms our country allows us.

And so America survives and will thankfully continue on simply because 'We the People' demand it be so...and that demand at times might even mean that more blood must be spilled in the name of freedom...blood spilled like it was when America was born...blood spilled when brave patriots fought back against those trying to bring them to their knees.

So my fellow patriots enjoy this day...fly our flag proudly and enjoy America's birthday as freedom rings out from "sea to shining sea"...but never forget our nation's birthing pains for those freedoms we all sometimes take for granted came at a very high price. But know that no matter the obstacles placed in our way America remains a true bastion of freedom...the shining light that draws those whose hope springs eternal and where dreams become the realities of those longing to be free.

Wishing all my blog followers a very Happy 4th of July...
our country's Independence Day! 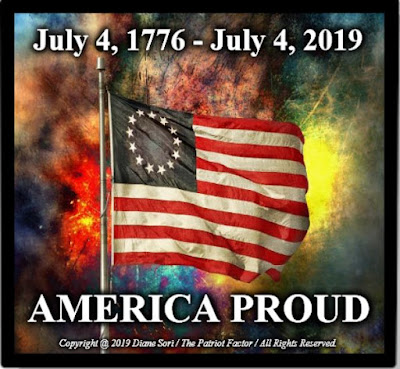 Posted by Diane Sori at 6:35 AM No comments: