"Are you going to report on this so the world can hear their voices?”
- Florida Senator Marco Rubio (R)

Cuba...a mere 90 miles from the U.S. yet for all practical purposes it's a world away...a world where freedom is non-existent and where communism reigns supreme. Cuba...a nation where “unauthorized public gatherings” are illegal and where actual physical protests are rare and far between. And yet the Cuban people could only be pushed so far as witnessed by the massive protests that recently did and still are taking place not just in Havana but in small towns throughout the island nation....protests to demand an end to the country's communist dictatorship, its socialist based failed economy, and its sixty plus years of repressive “iron fist” rule. And within the protesters calls for “Libertad, Basta y Unir”...as in “Freedom, Enough, and Unite”...one can hear voices demanding that Cuba's President Miguel Diaz-Canel step down.

And as Cuban-Americans here in South Florida*...Cuban-Americans whom Díaz-Canel claims are “egging” the protesters on...having not only blanketed the streets of Miami's “Little Havana” in a show of support and solidarity for their “brothers and sisters” protesting in Cuba, their sheer numbers alone actually shut down a stretch of South Florida's Palmetto Expressway last Tuesday. And with said solidarity and support for the Cuban people now spreading throughout Florida and across the U.S., it should not come as any surprise that the Cuban regime shut down internet, media, and phone access both into and out of Cuba...with limited access restored three days after the protests began. And really, why wouldn't they shut it all down especially with images on social media sites showing what appears to be Cuban police and special security forces detaining, beating, and pepper-spraying some of the peaceful protesters. In fact, a number of those detained...a number as high as one hundred...have now been reported “missing.” Not good folks...not good at all.

And while President Miguel Diaz-Canal...actually a Fidel Castro-like dictator...refers to those who are protesting as “mercenaries" in hopes of turning public opinion against them, word is still getting out that the Cuban people are tired, hungry, and outright disgusted at being forced to live without the basic necessities that we in this country and elsewhere take for granted. And with said people already wallowing in the midst of their county's worst economic crisis in decades, food prices continue to soar while food shortages and power outages are becoming more and more commonplace across the whole of Cuba.

So now as new voices continue to be added to the cry for freedom and the return of civil liberties...what should be “truth in reporting” is proving to be anything but. How so... because one of the many narratives being pushed by the Cuban regime as well as by the mainstream media as the reason for the anti-government protests is simply that said protests are being driven by the Cuban people's now growing “awareness” of Covid-19. And as to be expected, it was just a matter of time before Covid would be blamed somehow...Covid coupled with a medicine and vaccine shortage plus a surge in new cases...never mind the government's dismal mishandling of the Covid crisis itself. And another narrative of course places blame on the still in effect U.S. sanctions on Cuba... sanctions which according to Diaz-Canal have directly lead to what he calls a "policy of economic suffocation."

But reality dictates that the Cuban people's struggle for freedom along with the still ongoing humanitarian crisis that has been Cuba's hallmark for generations, is now reaching a boiling point as witnessed by the countering show of force the Cuban police have initiated upon Diaz-Canal's orders. And this includes the police not only being out in visible force on the country's streets, but seeing said police being equipped with Special Forces jeeps that have machine guns mounted on back...seeing the police using pepper spray and arresting dozens of protesters as more and more folks took to the streets...and seeing the police, whose orders were to use “extreme force” if need be against their fellow countryman, actually doing so against those who, for the most part, were peacefully and rightfully demonstrating in the streets.

So here it must be understood that while it's unfortunate, the using of “extreme force” is indeed standard operating procedure in communist and socialist ruled countries like Cuba, countries where the masses are brainwashed into believing that an insulated and well protected leader...a leader actually forced upon the people...is the best judge of what the masses want, need, and require, with party loyal bureaucrats somewhat but not totally exempt from what is now hard-line totalitarian rule. And with said government making all the decisions as to what will or will not constitute the economic make up of its citizens lives, individual choice and the right to “free will” becomes nonexistent as equality for the so-called “greater good” becomes the rule of law and anything but order. Personal ambition is not allowed nor is motivation to better oneself given, which in time naturally tends to lead to a country's “economic suffocation.”

And so the economic crisis now engulfing Cuba is indeed a form of “economic suffocation.”

But like with all economic crisis, Cuba's leaders do not blame themselves or their repressive and mismanaged government policies for their economic woes, but instead place blame directly on the aforementioned U.S. sanctions and on a pandemic that has caused Cuba's tourism industry to basically shut down. And for a country dependent on tourist revenues as the means by which to purchase the majority of its foodstuffs, its fuel, as well other key imports critical to meet both agricultural and manufacturing needs, this is especially hard. And while Prime Minister Manuel Marrero-Cruz recently announced that “travelers” coming into Cuba will be able to bring in food, medicine, and other essentials without having to pay import duties, know this is a joke at best for not only is travel into Cuba almost non-existent right now, but his much heralded announcement is only a temporary measure...a temporary measure deemed “too little, too late” by the protesters and government critics alike.

So when “economic suffocation” does take hold of a country, as it has in Cuba, it not only affects the populace but how that country's government actually runs. Remember, without much needed ambition and motivation by which to sustain what is a socialist economy, reality again steps in to dictate that what was once hoped for economic equality for all becomes but economic equality at the bottom rung of the socio-economic ladder. And it's this continued dwelling at the bottom rung which has now led the Cuban people to say “enough is enough” after six long decades of seeing their once great nation...a nation formally known as the “Jewel of the Caribbean” and "The Land of Romance"...being run not only with an “iron fist” but with it deliberately being run into the ground by a corrupt group of government bandits who, while the people suffer, continue to live high off the proverbial hog.

“Cuba will see 'horrific bloodbath' if Biden does not take action.”
- Senator Marco Rubio's truthful and foreboding words to Joe Biden regarding pressuring the Cuban regime to stop retaliating against the protesters.

And so now here in the U.S. the game of politics begins, the very same game of politics that saw Obama turning his back on the protesters who tried to break free from the mullahs rule in Iran. And like with Obama, Biden and his administration love to tout the use of diplomacy as the be all, end all to any international problem that might arise. And with the U.N. obviously being no friend of the U.S., and with the current Cuban situation falling under the auspices of said U.N., know that Biden's form of complacent diplomacy at best will in no way be strong enough to address the Cuban people's woes let alone be strong enough to pressure or at least shame the international community into condemning and isolating a communist regime that resides a mere 90 miles from our Florida shores.

But then again what do you expect from a president who would be contradicting his own party's agenda if he were to take real action in support of the Cuban protesters...a president whose very own State Department continues to claim that the “right to peaceful assembly” is being observed in Cuba no matter that even they know that the people in Cuba actually have no rights, and that both eye witness accounts and media footage clearly show police, many dressed in plain clothes, beating some of the protesters. And know that they dare not even mention...it's bad PR after all...the now ever growing list of “missing persons”...as in those who were arrested for peacefully assembling suddenly disappearing.

And to make matters even worse, fearful of a mass exodus from Cuba, Biden's Homeland Security Secretary Alejandro Mayorkas warned Cubans that the U.S. Coast Guard has deployed officials to monitor the Florida Straits and that they would “interdict migrants” attempting to flee the island and reach the U.S. “irregularly.” Nice words they are not but words not unexpected for they come from a man whose president and party allows “illegals” to freely enter our country via our southern border. But the truth is that Cubans, for the most part, vote for Republicans and not for Democrats, and that even in a crisis, for Democrats, it's all about how many votes they can garner...said crisis be damned.

So while most Republicans are standing strong with the Cuban people...people daring to protest against both socialism and a communism regime...Democrats, the very folks who watched our cities burn for more than a year without saying a word, give but cursory lip service to the Cuban's quest for freedom. And really, why would Democrats praise the very people who want to rid themselves of exactly what they want to implement here.

And while I write this, we don't know what the final outcome for Cuba or it's people will be...we still don't now if the protests will continue on...we don't know if the regime will forcibly put an end to the dissent and how many will be killed in the process of their doing so...we don't know what the regime will do to the people for some form of punishment will surely follow...and we most certainly don't know how or even if Cuban-Americans will be able to aid those trying to break free of a regime that views freedom as the antithesis of its, and the Democrats, Marxist agenda.

A lot of questions that need to be answered with time alone providing those answers.

And so with that said I wish the Cuban people much success in their endeavour for their fight for freedom is truly just. And to Biden and crew who relish in spewing pretty words without substance, I hope what is now happening in Cuba takes root here in our country as well, for while our fight might be different in origin the fight for freedom from tyranny and unjust rule always remains the same.

* For a glimpse into my husband's family's escape from Cuba please read my past article 'A Personal Glimpse Into Castro's Hell'
http://thepatriotfactor.blogspot.com/2016/11/op-ed-apersonal-glimpse-into-castros.html

Tomorrow, Tuesday, July 20th, from 7 to 8:30pm EST, RIGHT SIDE PATRIOTS Craig Andresen and Diane Sori discuss their Special Report: Cuba On the Brink including 'Cuba's Fight For Freedom' and '90 Miles From Freedom'...plus important news of the day. 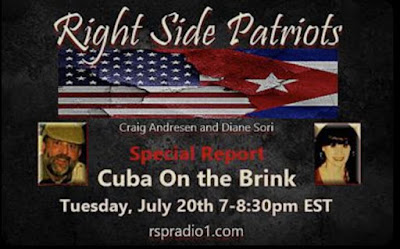