Hillary To Hand Over Private Email Server To DOJ

UPDATE: Guy has more detailed post on this development. Spoiler alert: It's not good.


Hillary stated unequivocally that there was "no classified material" whatsoever on her dangerously unsecure private email server, a claim that has been proven false several times over, based on a small sub-sample of the emails she didn't delete. Not only were ten percent of the messages reviewed classified -- and classified at the time -- two of the four contained top secret information.

**Original Post**
The jig is up. After previously refusing to turn over her private email server to an independent third party for analysis, Hillary Clinton plans to hand it over to the Department of Justice (via CNN):


Hillary Clinton has instructed her attorney to hand over her private email server and a thumb drive of all her work-related emails to the Justice Department in an effort to blunt an expanding probe into the use of a private email account.

Clinton, now the Democratic presidential front-runner, "directed her team to give her email server that was used during her tenure as (Secretary of State) to the Department of Justice, as well as a thumb drive containing copies of her emails already provided to the State Department," her spokesman, Nick Merrill, told CNN early Tuesday evening. "She pledged to cooperate with the government's security inquiry, and if there are more questions, we will continue to address them."

No Means No: Keep Gitmo Jihadists Out of U.S.A.

Michelle Malkin / Townhall Columnist
Get off that late-summer snooze button, America. The Obama administration is plotting to break a major promise made under oath -- and jeopardize our nation in the name of social justice.

This week, top White House officials floated renewed plans to close down Guantanamo Bay in Cuba. Pentagon and Justice Department bureaucrats have been powwowing over how to shutter the facility and import up to hundreds of detained jihad suspects into the U.S. It's a longtime legacy promise President Obama wants to fulfill to progressives before he rides off permanently to Martha's Vineyard and Hawaii's lushest golf courses.

There's one teeny-tiny problem: the promise former Attorney General Eric Holder swore to Congress after the last time his stubborn boss tried to dump the detainees on American soil. Somehow, as they busied themselves with the nitty-gritty details of transferring Islamic enemy combatants to Gitmo North, key members of Team Obama suffered a disturbing bout of national security amnesia.

Let's refresh their leaky memories. In 2009, the White House first floated the idea of using the Thomson Correctional Center, a high-security prison in Illinois, to house Gitmo denizens. Family members of 9/11 victims, God bless them, raised a national uproar. Debra Burlingame, sister of American Airlines Flight 77 pilot Chic Burlingame, blasted the feckless president's assertion that no one would be put in danger by his Gitmo relocation program.

Iran deal “does nothing to change the fact that, in plain Farsi, Iran is committed to world conquest by Islam”
By Robert Spencer / Jihad Watch

“To treat with the Islamic Republic over the particulars of its weaponry while failing to address the very purpose of its bellicosity is delusional. The so-called Joint Comprehensive Plan of Action does nothing to change the fact that, in plain Farsi, Iran is committed to world conquest by Islam, with its clerics as warlords. Those […]

In case you missed my column this week at WND:

The Jerusalem Post reported Thursday that the Muslim world is laughing over the rapid disintegration of Obama’s pathetic 50-man “moderate” Syrian rebel force. Middle East analyst Ali Bakir said: “No one in the Arab world takes this program seriously; I mean you would need around 50 to 60 people to play paintball but definitely not to fight Islamic State.”

It’s not just the Muslim world that’s laughing at us – the whole world is. CNN reported Thursday that the New Syrian Force had been completely...

Posted by Diane Sori at 8:42 AM No comments:


RIGHT SIDE PATRIOTS...LIVE
Today, Wednesday, August 12th, on RIGHT SIDE PATRIOTS on CPR Worldwide Media from 2 to 4pm EST, Craig and Diane are honored to have as their very special guest PAMELA GELLER and she has breaking news. Also being discussed...even more about Hillary's emails, and why the Republican debate for the most part left out veterans issues. 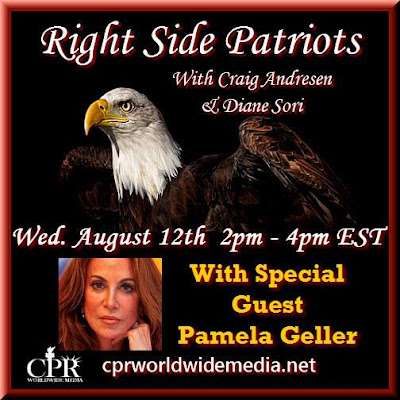 A Clinton-appointed judge who prevented a lawyer who brought an organized crime case against Bill and Hillary Clinton and their family foundation from obtaining evidence has concluded the case must be tossed essentially because of a lack of evidence.

“It is unclear whether the records allegedly withheld from plaintiff exist at all, and if they do exist whether they are in defendants’ possession,” wrote U.S. District Judge Donald M. Middlebrooks of Florida in throwing out the case brought by attorney Larry Klayman of Freedom Watch.

“Finally, if all of this somehow garnered public support for plaintiff, it is unclear how such public support would translate into financial support.”

The judge previously blocked Klayman from deposing the Clintons about their actions and the foundation’s. He also did not allow Klayman to obtain access to documents the lawyer said could support his allegations.

“I am disappointed but not surprised. This case was a hot potato for a Clinton-appointed judge. Had he allowed it to proceed, he would have been potentially retaliated against by the Clintons,” Klayman said. “In this regard, he would not have had a chance to be nominated for a higher judgeship or other post should Hillary Clinton be elected president. While federal judges are appointed for life, they are not immune to politics. I intend to take an emergency appeal and I am confident that the judge’s decision will be reversed by neutral judges on the appeals court.”