Wishing all my blog followers of the Jewish faith
a very Happy Hanukkah. 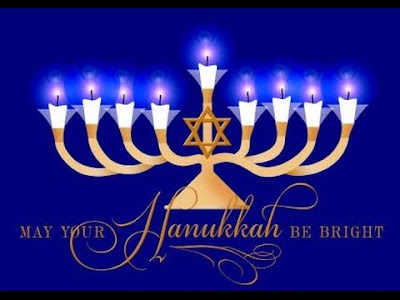 Email ThisBlogThis!Share to TwitterShare to FacebookShare to Pinterest
Just a Thought...
Four Lessons Learned
By: Diane Sori / The Patriot Factor

This is what I learned from last night's Republican loss in Alabama:

1. All Republican candidates from now on need to be aware that they are prime targets for unsubstantiated and most times false sexual allegations being leveled against them. This proved to work in the Roy Moore case and the Democrats will keep using it in every race in 2018.

2. Having a write-in candidate, even a Republican one, takes away from Republican votes and this one was especially grievous as it was put up by Mitch McConnell and his rhino bunch. Vote those bast*rds out!


3. The inner cities and mostly black counties will always vote Democratic because the ‘gimme-gimme ‘you owe me’ sorts will always vote for those who will feed, clothe, and house them...will give them 'free stuff.' And now we can add in the millenials will too.

4. While Doug Jones won his victory was by one percent meaning Republicans who stayed home and didn’t vote shame on you...I hope you’re happy with the outcome.
Posted by Diane Sori at 7:45 AM No comments:

Democrat Doug Jones has pulled off a major upset in Alabama by defeating Republican Roy Moore in Tuesday’s special election, becoming the first Democrat to win election to the Senate from the deeply conservative state in 25 years.

"We have come so far and the people of Alabama have spoken," Jones said during a victory speech in Birmingham late Tuesday.

But in a late-night speech to supporters, Moore refused to concede. Moore told the crowd that when the “vote is this close…it’s not over.”

Moore said the campaign was looking into the state's "recount provision." Under Alabama law, a mandatory recount takes place if a candidate wins by a half percent or less.

“We also know that God is always in control,” he said.

Other Republicans, though, already accepted the outcome. In a tweet, President Trump congratulated Jones on his “hard fought victory.”

“The write-in votes played a very big factor, but a win is a win,” Trump said. “The people of Alabama are great, and the Republicans will have another shot at this seat in a very short period of time. It never ends!”

Read entire article and see video and tweets here: http://www.foxnews.com/politics/2017/12/13/alabama-senate-election-doug-jones-wins-in-major-upset-roy-moore-wont-yet-concede.html
Posted by Diane Sori at 7:35 AM No comments:

Email ThisBlogThis!Share to TwitterShare to FacebookShare to Pinterest
Iran: Trump’s move “will hasten the destruction of the Zionist regime and will double the unity of Muslims”

Email ThisBlogThis!Share to TwitterShare to FacebookShare to Pinterest
Newsweek: “Because of Trump, People Are Burning Israeli Flags and Attacking Jews”

Unconscionable. This shows how morally inverted the establishment media is. Muslims riot and attack Jews and burn flags, and it’s Donald Trump’s fault. What did Trump do? He recognized reality — that Jerusalem is the capital of Israel. Is that some moral evil? No. It is simply a fact. Muslims did not have to burn Israeli flags and attack Jews in response to Trump’s announcement. They chose to do that. They weren’t forced. When they chose to do this, it wasn’t Trump’s fault. It was theirs, and theirs only.

But the enemedia is out of control and increasingly unhinged in its desperation to bring down Trump. They are even blaming Trump for the Port Authority jihad bombing, saying it was because of Trump’s announcement, when the bomber had, in fact, been planning this for weeks, long before the announcement.

“Because of Trump, People Are Burning Israeli Flags and Attacking Jews,” by Cristina Maza, Newsweek, December 11, 2017 (thanks to Mark):

Read entire article here: https://pamelageller.com/2017/12/newsweek-trump-jews.html/
Posted by Diane Sori at 7:22 AM No comments: