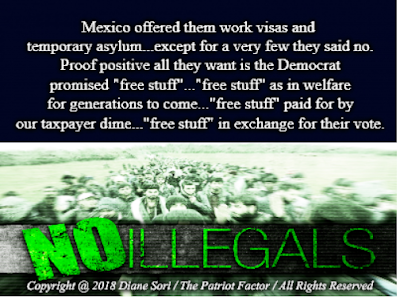 We live in bizarro times. Suddenly, it is controversial to state obvious, neon-bright truths. This week, it has become newsworthy to observe that illegal border-crossers who circumvent required medical screenings are a threat to America's public health and safety.

Just look at these hyperventilating headlines and tweets.

From Newsweek, which is supposed to, you know, report actual news of the week: "'We don't know what people have': Laura Ingraham calls migrant caravan a health issue."

This is not "news." It's propaganda recycled and regurgitated by lazy political operatives masquerading as journalists. At least the Newsweek writer gave credit to his zealous hitmen sources: "Ingraham's comments," he dutifully wrote, "were first highlighted by Media Matters for America."

Email ThisBlogThis!Share to TwitterShare to FacebookShare to Pinterest
Italy’s Salvini congratulates Bolsonaro: “Even in Brazil, the citizens have sent home the left!”

The so-called “populist” movement, which is condemned by the left as “racist,” “Islamophobic,” “xenophobic” and the like, has been gaining momentum in many Western countries, and now in Brazil. While Islamic supremacists and jihadists have been expending considerable efforts to infiltrate Western countries, they have largely depended upon Leftist leaders, who have betrayed their nations […]
Read in browser Â»