In support of our troops

Posted by Diane Sori at 2:22 PM No comments:

Netanyahu: “Border with Syria has lately been full of jihad and Hezbollah terrorists” 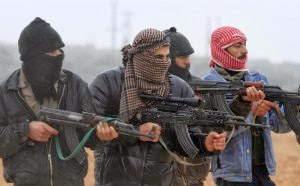 This is no surprise. Sunni jihadists in Syria have said that the liberation of “Palestine” will follow Assad’s fall. And Hizballah, of course, is no less dedicated to the destruction of Israel. They may exhaust each other, however, before they can ever get close to harming Israel.


The “border with Syria has lately been full of jihad and Hezbollah terrorists, placing us with a new challenge, Prime Minister Binyamin Netanyahu told the Likud party caucus Tuesday.

Speaking shortly after a bomb, apparently planted by Hezbollah, exploded at an Israeli patrol and wounded three soldiers, he added, “We have succeeded to maintain quiet against the civil war in Syria, and we will continue to act with aggressiveness to maintain the security of Israel.”

Today's first guest on RIGHT SIDE PATRIOTS will be William Robert Looman, the Oathkeepers District Leader for NW Georgia and a former Marine who served in Operation Desert Storm. Bill has the 'honor' of being the first American investing by the FBI after Obama took office when accusations surfaced that he was a racist because he had a sign on his business truck saying he will NOT hire anyone until Obama is out of office. The man who wanted the 2012 presidential ticket to be CAIN/WEST a racist...NO WAY!

Our second guest will be Jake Danishevsky author of "AfterTastes and Tales from Russia."  Jake is a Soviet born Jew from Kiev, Ukraine, who emigrated to the US in 1979 and is now conservative American citizen.  Jake will share why Putin should NEVER be allowed to rebuild the Soviet Union and give his take on what is currently happening in Ukraine.

Hope you all will tune in today, Wednesday, March 19th at 2pm EST for RIGHT SIDE PATRIOTS on CPR Worldwide Media with Craig and my special guests William Robert Looman and Jake Danishevsky...it will be one great show. 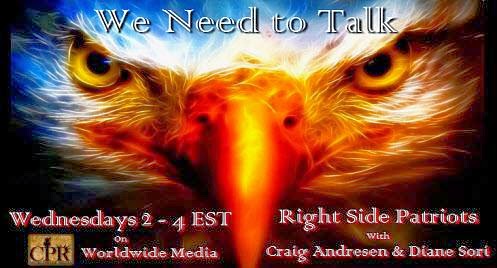 
Israel cannot depend on the United States to lead any action against Iran's nuclear program and can only rely on itself, the country's defense minister said in remarks published Tuesday.

The comments by Moshe Yaalon came as world powers and Iran were about to start a new round of talks over Iran's contested nuclear program.

The West fears the program could be used to make a nuclear weapon and seeks to scale it back.

Tehran denies the program has a military dimension and insists it is for peaceful purposes only, such as power generation. If a deal with world powers is reached, sanctions imposed on Iran over the nuclear program could be lifted.

At the same time, Israel's strongest piece of leverage, the threat of a military strike on Iran, has taken a back stage to the talks despite Israeli Prime Minister Benjamin Netanyahu's insistence it remains on the table.

"We thought that the one who needs to lead the campaign against Iran is the U.S.," Yaalon was quoted by the daily Haaretz as saying during a lecture at Tel Aviv University on Monday.

Instead, Yaalon said, the U.S. began negotiations with Iran and Iran gained the upper hand in the talks.

"If we wished others would do the work for us, it wouldn't be done soon, and therefore in this matter, we have to behave as if we can only rely on ourselves," Yaalon said.

Yaalon's office confirmed his remarks but refused to comment whether he was advocating an Israeli strike on Iran. Netanyahu's office also declined to comment.

Yaalon criticized the West, saying its leaders prefer to avoid confrontation with Iran. As for the U.S., the defense minister alleged American influence is waning in other parts of the world, such as Ukraine over the crisis there.

"Weakness certainly does not pay in the world," he said. "No one can replace the U.S. as the world's policeman. I hope the U.S. will come to its senses."

Yaalon has made controversial comments about Washington in the past. In January, he was quoted as saying that U.S. Secretary of State John Kerry was "obsessive" and "messianic" over his Mideast peace efforts. The comments triggered an angry response from the U.S., Israel's most important ally.