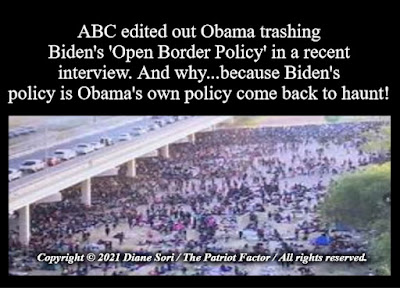 They’re never going to say it. They’re never going to admit it. But Joe Biden’s immigration policy is essentially open borders. Everyone and anyone can come here—no consequences. Migrants then get charted flights and bus trips all over the country for their dispersal. It’s insane. We have highway underpasses totally swamped with hordes of people—images the Biden administration doesn’t want you to see as it only amplifies the nature of the crisis. When Border Patrol tries to do their job, they’re attacked. The Biden White House weaponized fake news against their own people. Border Patrol was dragged through the mud after some detached and grossly dishonest press members decided to make horse reins “whips.” Agents were on horseback trying to turn back a sea of Haitian immigrants and the press said these guys were whipping them. No. Not true. But the slavery talking point bubbled up. It was nonsense. Now, multiple outlets are retracting the whips story because it’s trash, but the Biden administration will continue its war on Border Patrol. They’ll probably punish the agents. And they’ve declared war on horses. I don’t know if you’ve noticed, I’m sure you have, but those moves don’t necessarily address the border crisis.
Read entire article here.
Posted by Diane Sori at 8:36 AM No comments:

One of President Joe Biden’s most vociferous critics finally asked the question of Gen. Mark Milley, the military’s top officer, that has become a central focus of right-wing politics in recent months.

“Gen. Milley,” Sen. Tom Cotton said to the embattled chairman of the Joint Chiefs of Staff at a hearing on America’s calamitous war in Afghanistan, “Why haven’t you resigned?” https://www.dianomi.com/smartads.epl?id=3533

The question from the Arkansas Republican centered on why Milley, himself a seasoned veteran of America’s longest war, has not taken the ultimate form of protest after acknowledging he previously urged Biden to keep thousands of troops there. But, objectively, the subsequent exchange struck directly to the core of a growing sentiment in far-right corners of the Republican Party at the urging of former President Donald Trump. They are intent on portraying Milley as a political operative – and perhaps…Read more here.

Email ThisBlogThis!Share to TwitterShare to FacebookShare to Pinterest
RIGHT SIDE PATRIOTS...PODCAST
For those who missed last night's show where RIGHT SIDE PATRIOTS Craig Andresen and Diane Sori discuss 'It Is About Freedom'; 'Biden's Mandates - Dictatorial and Arbitrary'; and important news of the day....you can listen to it (and previous shows) at your convenience at: https://www.rspradio1.com to go directly to our podcasts and hope you become 'followers' of RIGHT SIDE PATRIOTS.