The next time you stop at a gas station and spend almost half your paycheck filling up your tank, thank Mr. President Joe Biden because, according to him, it's almost as if you're getting a $100 monthly raise.

In an email sent out to reporters by White House staff, the Biden administration is claiming that Americans should interpret the falling price of fuel as a monthly raise.

Titled in the subject line as "ICYMI: America Just Got A $100-A-Month Raise," the email says, "President Biden has taken decisive action to lower prices at the pump, and the current drop in gas prices is the fastest decline in over a decade… thanks to that decline, Americans are collectively spending around $400 million less each day than they would if gas prices had stayed at their peak."

The email also includes a link to a CNN story that dropped at the same time as the email, with the first line reading, "Next time you stop at a gas station, think of it as a $100-a-month tax cut. Or a maybe $100-a-month raise." Read more here.

Email ThisBlogThis!Share to TwitterShare to FacebookShare to Pinterest
His Race to Lose? Another Poll Shows Ron DeSantis Is Rolling in Florida
Guy Benson / Townhall Tipsheet

It was a very odd thing. For months – dating back to the winter – there were no public polls of the Florida gubernatorial race. We wrote about one of the last published surveys at the time. There was another one in the field at the end of February and early March. Both showed sizable leads for the incumbent. Since then? Nothing. Just understandable assumptions that Gov. Ron DeSantis was ahead by a good margin. With the Sunshine State's primaries finally looming, a few new polls have emerged. We told you about this one earlier in the week, as it garnered a fair amount of attention for a reason other than DeSantis' solid advantage: 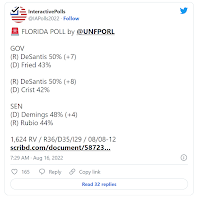 This raised eyebrows over the Rubio number, which I simply do not take seriously. There was another recent poll (a Democratic internal) showing Rubio tied in his re-election quest, with DeSantis "only" up by five. That one seemed barely plausible. But as I said in this analysis, Rubio running double-digits behind DeSantis is simply not reality. Neither, in my view, is a subsequent survey purporting to show the incumbent senator up 11 points over his challenger. My best guess, I told some colleagues, was that DeSantis is leading in the high single digits – what would amount to...Read more here.
Posted by Diane Sori at 7:35 AM No comments:

Email ThisBlogThis!Share to TwitterShare to FacebookShare to Pinterest
RIGHT SIDE PATRIOTS...PodCast
If you missed last night's show where RIGHT SIDE PATRIOTS Craig Andresen and Diane Sori discussed Biden's inflation bill fiasco; ILLEGALS flooding our border in record numbers; out of control crime in 'blue' cities; and a Virginia Board of Ed trying to rewrite American history...you can listen to it (and previous shows) at your convenience at: https://rspradio1.com to go directly to our podcasts and hope you become 'followers' of RIGHT SIDE PATRIOTS.

Posted by Diane Sori at 6:27 AM No comments: