Well, we can put to rest the notion that State Department spokeswoman Marie Harf committed a gaffe when she said that more jobs would keep Islamic militants from their genocidal mission.

Following the Islamic State’s beheading of 21 Egyptian Christians in Libya, she said: “We cannot win this war by killing them, we cannot kill our way out of this war. We need … to go after the root causes that lead people to join these groups, whether it’s lack of opportunity for jobs."

She was just giving the company line.

In a Feb. 19 Wall Street Journal column, “Our Plan for Countering Violent Extremism,” Harf’s boss, Secretary of State John Kerry, proclaimed that such killers are, indeed, victims of bad governance. If only we can “target our resources to meet the specific needs of those places” that hatch terrorists, we can end the madness, Mr. Kerry explained.

Imagine Winston Churchill speaking like that, even for a moment, as German bombs were falling on London.

“What the Nazi extremists need is a good urban renewal program,” Mr. Churchill, armed with Mr. Kerry’s insights, would have said while chomping a cigar and sketching out a midnight basketball schedule for Hamburg’s unfortunates.

In his article, Mr. Kerry used the terms “extremist,” “violent extremist” or “extremism” 12 times, never linking them to militant Islam. Never mind that the title of a video of the Christians’ beheadings by the Libyan branch of the Islamic State leaves no doubt as to the religious motive: “A Message Signed with Blood to the Nation of the Cross.”

It’s not about religion, you see. It’s about lack of upward mobility.

“The most basic issue is good governance,” Mr. Kerry elaborates. “It may not sound exciting, but it is vital. People who feel that their government will provide for their needs, not just its own, and give them a chance at a better life are far less likely to strap on an AK-47 or a suicide vest, or to aid those who do.”

Obama Tells Prosecutors They Have No Discretion On Immigration

President Obama's entire legal defense for his executive amnesty programs is that the executive branch must be afforded prosecutorial discretion when enforcing immigration laws.

So it might be a problem for his legal defense team when Obama admitted Wednesday at a Telemundo townhall that immigration officials under his policy have no prosecutorial discretion.

"The bottom line is that if somebody;s working for [Immigration and Customs Enforcement]  and there is a policy and they don't follow the policy there's going to be consequences to it."

Kerry: Pakistan has “vigorous commitment to take on and defeat violent extremist groups”

Joke of the Day. Kerry won’t name them and Pakistan won’t fight them. But there goes $3.4 billion more American taxpayer dollars, frittered away for smiles and promises.

How much of it will end up in the hands of the Islamic jihadists Kerry is afraid to identify as such, as so much of it has […]

Another wild power-grab. Power without accountability. The net is the very last frontier for free speech.

— Despite google algorithms that consistently render — day in day out, year in year out — always render left-wing sites on first page search results;

— Despite filters that block my site and sites like mine (Jihad Watch, The Religion of Peace, Creeping Sharia, Sharia Unveiled, et al) at work, school, and even US army bases and government agencies;

— Despite search engines refusing to include news sites like mine in the news searches;

— Despite the fact that the mainstream broadcast and print media, with the exception of the tepid Fox News, are notoriously left;
... 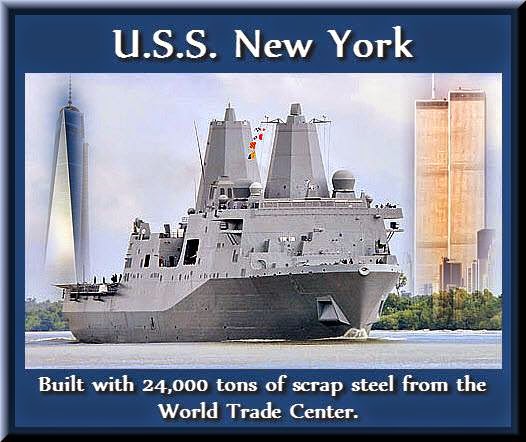 Here SHE is, the USS New York, made from the World Trade Center.

SHE was built with 24,000 tons of scrap steel from the World Trade Center...

SHE is the fifth in a new class of warship - designed for missions that include special operations against terrorists. SHE will carry a crew of 360 sailors and 700 combat-ready Marines to be delivered ashore by helicopters and assault craft...

Steel from the World Trade Center was melted down in a foundry in Amite, LA to cast the ship's bow section. When it was poured into the molds on Sept 9, 2003, 'those big rough steelworkers treated it with total reverence' recalled Navy Capt. Kevin Wensing, who was there. 'It was a spiritual moment for everybody there.'

Junior Chavers, foundry operations manager, said that when the Trade Center steel first arrived, he touched it with his hand and the 'hair on my  neck stood up. It had a big meaning to it for all of us' he said. 'They knocked us down. They can't keep us down. We're  going to be back.’ 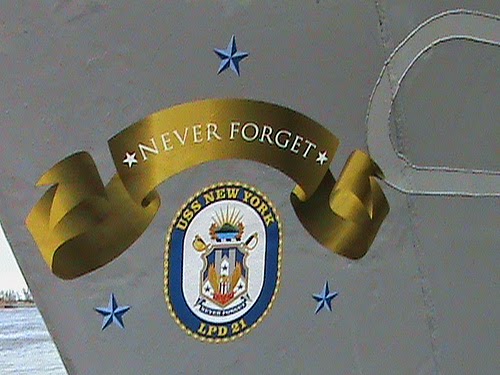 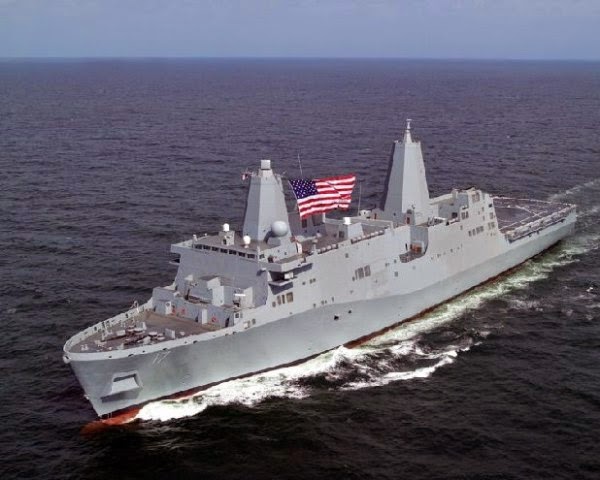 Islamic State (ISIS) savages planning to slaughter 150 Christians that they kidnapped, including women and children, unless the airstrikes are stopped

But it’s going to take them a little time to build enough immolation cages. ISIS is holding many more Assyrian Christians hostages than previously thought — and is planning to release a video threatening to kill them.

CNN  The abductions of the Christians took place Mondayafter ISIS seized two Assyrian communities from Kurdish forces in the northeast province of Hassakeh. Osama Edward, founder of the Assyrian Human Rights Network, told CNN that the extremist group is now believed to have 150 hostages, citing the latest information from the network’s team on the ground.

The video message will be directed to Barack Obama and other members of the U.S.-led coalition against ISIS, Edward said from Stockholm, Sweden. Edward, who has family in the area attacked by the terror group, said the latest information from the ground indicated the hostages had been moved to an ISIS-controlled location.