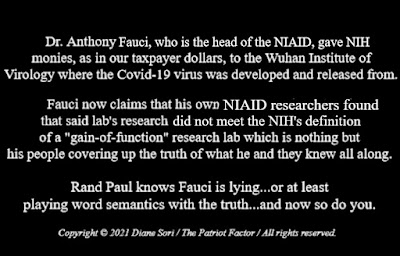 The prototype of the Sukhoi fifth-generation stealth fighter was revealed at the MAKS-2021 International Aviation and Space Salon, Reuters reported. The show opened Tuesday in Zhukovsky, outside Moscow.

Fifth-generation refers to the jet’s stealth characteristics, a capability to cruise at supersonic speed as well as artificial intelligence to assist the pilots, among other advanced features.

"What we saw in Zhukovsky today demonstrates that the Russian aviation has a big potential for development and our aircraft making industries continue to create new competitive aircraft designs," Putin said in a speech at the show.

The jet was designed to reduce service costs. "Our aim is to make the cost per flight hour as low as possible, to make it economical not only to buy but also to operate," Yury Slyusar, Russia’s United Aircraft Corporation head, said, according to Reuters.

Sen. Rand Paul (R-KY) has had enough of Anthony Fauci’s antics. He’s done. A large portion of the country agrees as well. The man cannot decide…on anything. The number of flip-flops is many. He’s been wrong about almost everything about COVID. He’s been caught engaging in political theater after he was vaccinated. Remember when he still wore a mask? Yeah, he admitted it wasn’t necessary post-vaccination. In his emails, he admits the store-bought masks don’t curb the spread of COVID but peddled mask mania regardless. And he might have committed a felony for lying before Congress. There’s something more to these grants that were given to the Wuhan Institute of Virology.

Fauci hates talking about it. He gets visibly irritated when asked about what the money was used for over there. Was it for gain-of-function research? Every day we learn more and the conclusion that this escaped from a lab becomes clearer. Katie wrote about the exchange Fauci and Paul had yesterday. It was quite testy:

Email ThisBlogThis!Share to TwitterShare to FacebookShare to Pinterest
RIGHT SIDE PATRIOTS...PODCAST
For those who missed last night's show where RIGHT SIDE PATRIOTS Craig Andresen and Diane Sori discussed their Special Report: Cuba On The Brink; and important news of the day...you can listen to it (and previous shows) at your convenience at: https://www.rspradio1.com to go directly to our podcasts and hope you become 'followers' of RIGHT SIDE PATRIOTS.