Illegal immigration awakens gut reactions, and voters should despise any pandering to illegal aliens out of fear of losing elections or appearing racist or uncaring. With all of the talk about the DREAMers and Deferred Actions, when will our leaders care about Americans born and naturalized, and the American Dreams that they pursue and want to see come true? Surely the needs of 310 million legal residents outstrip the 11 million in the shadows.

In 2008, I supported outlier candidate Congressman Tom Tancredo for President, even though he had a gringo’s chance in Guadalajara of winning the GOP nomination. Neither racist nor uncaring, the retired representative from Colorado advocated for a streamlined, strengthened legal immigration system, where American citizenship was prized, legal migration eased, and public systems remained stable instead of unsustainable.

The crisis of porous borders and weakened citizenship has worsened. With the rising bitterness surrounding of the immigration conflict, aggravated by rogue President Obama’s executive amnesty orders contrary to the letter and spirit of the Constitution, as well as the will of the people, anyone can respect the reporting of columnists like Breitbart’s Matthew Boyle as well Michelle Malkin (whose timely exposes early exposed the Obama Administration’s culture of corruption). However, Boyle’s strong affinity for US Senator Rand Raul (who called illegal aliens “undocumented citizens”) is unmistakable, especially regarding prior statements from potential Presidential contenders compared to their current assertions. Malkin’s demand for secure borders – period – cannot be ignored, but neither can the questions about those who refuse to leave, who live here illegally.

Why is The New York Times lamenting the souring of the personal relationship between President Obama and Israeli Prime Minister Benjamin Netanyahu instead of assuming Obama will subordinate his personal feelings to America's national interest?

Well, probably because they know he won't. He's a man scorned -- and he's getting more and more dangerous. Scorned? Yes, because when you don't bow to the wishes of a man with his personality, he apparently takes it as a personal affront.

That's why we read in Politico, "In the wake of Netanyahu's decisive reelection, the Obama administration is revisiting longtime assumptions about America's role as a shield for Israel against international pressure."

You want to know why? Well, let's let the article speak for itself. It continues, "Angered by Netanyahu's hardline platform toward the Palestinians, top Obama officials would not rule out the possibility of a change in American posture at the United Nations, where the U.S. has historically fended off resolutions hostile to Israel."

What, exactly, is this hardline approach that enrages Obama so much that he's willing to punish America's best ally in the region?

It is simply that Netanyahu took a strong stance against the establishment of a Palestinian state. Why would he do that?

Why should Obama presume to judge Netanyahu on that? Moreover, how could he possibly take this personally? Because that's the prism through which he views the world. It's all about him.

That's why Obama was outraged when Netanyahu chose to speak to Congress about the Iranian nuclear threat, which Obama continues to ignore -- or, arguably, enable. That's why he refused to meet with Netanyahu when he was in Washington for that speech -- again, putting his petty feelings above our national interests. And that's also why he has yet to pick up the telephone to call Netanyahu to congratulate him for his electoral victory this week. Incidentally, I believe that's also why he sent the Churchill bust back to the Brits. It's about him and his feelings, our relationship with ally Britain be damned.

Be fair. No other president has behaved like this. So don't defend it.

And in the photo, he has one index finger raised — the signal of adherence to Islamic monotheism that has become the sign of allegiance to the Islamic State. Dzhokhar Tsarnaev was no “gullible teen”; he was a convinced jihad killer. “Inside the bedroom of the Boston bomber: Dzhokhar Tsarnaev poses with jihadi black banner […]

with Iran surged on Capitol Hill on Thursday, even as details emerged about a potential agreement that would allow Tehran to retain up to 6,000 uranium enrichment centrifuges while getting immediate relief from international economic sanctions. Washington Times)

Obama campaigned on the promise in 2008 and 2012 on the “crystal-clear promise to stop Iran from getting a nuclear weapon.” An enormous bloody lie he told again and again and again. He grovels to Iran, Iran spits in his face and threatens America and her allies. So Obama grovels some more.
...

Email ThisBlogThis!Share to TwitterShare to FacebookShare to Pinterest
Op-ed:
A Phone Call That's Too Little and Way Too Late
By: Diane Sori / The Patriot Factor / Right Side Patriots on CPR Worldwide Media

And his losing...especially his being a muslim losing to a Jew...is something the 'anointed one' still finds a hard pill to swallow. But let's put all the political correctness nonsense aside and speak a truth as to why it took Obama so long to place what should have been a routine congratulatory call...a truth that few will dare say but a truth which I will say...Barack HUSSEIN Obama has proven once again that he is indeed an anti-Semite...you know it...I know it...and he knows we know it but simply does NOT care that we do. However, this most miserable of men in his capacity as president (I still gag on that one) should at least try to keep his Jew-hatred in check when it concerns the leader of Israel...Israel...America's closest ally in NOT only the Middle East but in the world.

And once again his actions and words tell yet another sad truth the media looks away to...that being that Obama personally hates Benjamin Netanyahu NOT just because he is a Jew, but also because he is a leader who commands and garners his fellow countrymen's respect... something Barack HUSSEIN Obama will NEVER be able to do.

But now that Obama has finally placed that all-important phone call...a call where he congratulated Netanyahu on his party's success in winning a plurality of Knesset seats...his party's success NOT his personal success...do NOT forget that it also took Obama almost a week to congratulate Netanyahu after his 2013 election win. But most important to remember is how fast he was to rush to the phone to congratulate Turkey's Recep Erdogen, Egypt's Abdel Fattah el-Sisi, Iran's Hassan Rouhani, and even his main nemesis Russia's Vladimir Putin, when they won their respective country's elections. So do NOT say this delay in calling Netanyahu was NOT done on purpose, because quite simply it was.

And while like I said NO personal congratulations of sorts crossed this man's lips during that farce of a phone call, Obama on Tuesday's election night did have his spokesmouth Josh Earnest bloviate empty words congratulating Israel for holding a democratic election that bridged right into an outright attack on Netanyahu himself...an attack over his tough and now unwavering stance of opposition to a Palestinian state, along with his pledging to (rightfully) keep building Jewish settlements in the occupied territories. Saying Obama still believes in a two-state solution and chastising BiBi for saying that there would be NO Palestinian state on his watch, Earnest went so far as to say that Obama would be "re-evaluating" the U.S. relationship with Israel itself, as well as reviewing our protocol of always providing diplomatic cover for and aligning with Israel at the U.N.

In fact, as payback for Netanyahu's win, it's been leaked...if you will...that the U.S. may now agree to come on board with the U.N. Security Council's draft resolution ordering...YES ordering...a two-state solution, along with mandating an Israeli withdrawal from Judea and Samaria. As if the U.N. and Obama can order Israel...can order or blackmail Netanyahu...into giving up even one inch of their land for the establishment of a Palestinian state...a Palestinian state that already exists...as in can you say 'Jordan'...as in go talk to King Abdullah II about that one. 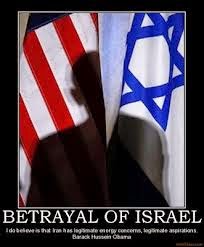 And Obama as expected is once again going to stab Israel in the back.

So the man...the islamist...who in full hissy-fit payback mode is also still refusing to renew or even extend a much relied upon 40-year agreement to supply Israel with emergency oil if needed...is showing the world even more proof of his outright hatred of both Netanyahu and the Jewish state itself.

And to add insult to injury Obama...good little compliant muslim that he is...let it be known that he was also "deeply concerned" about divisive and...gasp...non-politically correct words and a “cynical election day tactic” from the Likud party that he claimed was an effort to “marginalize” one segment of Israel's population, that being Israel's minority Arabs. Israel has a 20% Arab population, but because of a few Likud social media posts that warned Israelis about the “danger” posed by a high turnout by Arab voters, Obama decided to play the race card in a 'tit for tat' maneuver. And in this case the rightful “danger” Likud was referring to was voter fraud...as in Arabs voting who were NOT registered to do so. And look who's calling the kettle black when it concerns a call of possible voter fraud...the man who looked away as his black liberal base each cast two, three, and four votes for him...just saying.

So now as the dust settles, as an election becomes one for the history books, and as a phone call was finally made...what happens next. Will Netanyahu keep to his word that NO Palestinian state will happen on his watch (see video here of BiBi saying just that here: http://www.cnn.com/2015/03/16/middleeast/israel-netanyahu-palestinian-state/)...and will he keep sounding the alarm about Obama's very foolish diplomatic outreach to Iran. I believe he will for BiBi has proven time and again that he is an honorable man of his word. And know that Obama will keep doing what he does best...lying through his teeth, making deals with and aiding and abetting America's enemies, as well as his favorite...digging the knife deeper into both Israel's and Netanyahu's back every chance he gets.

But hey, Barack HUSSEIN Obama has always said said he “will stand with the muslims if the political winds shift in an ugly direction”...and that ugly direction leads right back to 1600 Pennsylvania Avenue...just saying.