By Craig Andresen – The National Patriot and Right Side Patriots on cprworldwidemedia.com

Yesterday, in “Enough…We’ve Had Enough…Part 1 of 3” my Right Side Patriots partner and friend Diane Sori outlined the awakening in France and across Europe to the clear and present, deadly scourge of Islam and how, despite the threat we face in our country, we, as a nation, continue to hit the snooze button.

It was beyond shameful that, while the world’s leaders, nearly 50 of them and even the likes of Abbas and the King of Jordan…wolves in sheep’s clothing…attended the march against Islam in Paris…OUR so-called leader…did not.

While the French press and the European press spoke out against Islam…OUR press continued to shill FOR Islam by coddling the ideology of death and destruction, to cover Obama’s ass and by playing a dangerous and fatal game of political correctness.

I am sick and tired of being told the lie by our mainstream media that the threat posed by Islam is somehow not dire and that, at the drop of a hat, how the majority OF Islam is…a peaceful…”religion.”

NOTHING could be further from the truth.

Here’s How GOP Can Destroy Myth of Obama Economy

Everywhere we turn in the media, we hear the lie that the Obama economy is in “recovery.” Bill Maher actually taunted Republicans on his show last week, daring them to attack Obama’s economic record. Now it appears that Hillary has bought into this great lie.

The word is that Hillary is about to tie her presidential campaign to Obama’s economic policies. Why? Because for the first time she believes the economy is in “recovery.” She is no longer afraid or embarrassed to support Obama’s policies.

Where are the GOP leaders to rip this narrative to shreds? Are they so blind, deaf and dumb that they have no idea there is no recovery for the middle class. There is only misery and poverty. Do Republican leaders believe the lies and propaganda spewed by Obama, his socialist cabal and the biased leftist media? It’s so easy to attack the lies and rip the “good news” to shreds.

So here’s a lesson for GOP leaders from a successful small businessman operating in the REAL OBAMA ECONOMY. Listen and please take notes.

The narrative provided by Obama and his Kool-Aid drinking fans in the media (like Bill Maher) is that the economy is doing great…GDP is up dramatically… unemployment is way down…healthcare costs are down…and Obama has lowered the deficit. These are the same lies told by every Democratic member of Congress, and the GOP lets them get away with these lies. Here is how you debunk them.

In the wake of President Obama's pathetic disengagement over the Islamic jihadist attacks on Paris, people are once again decrying his lack of leadership, but the problem is something more fundamental than leadership.
Even if Obama were a gifted leader, when it comes to many issues, especially confronting radical Islam, he wouldn't know where to lead us. If you misapprehend a problem, you can't possibly navigate, much less lead, toward a solution.

From the beginning of his term in office, Obama has evidenced a deep moral confusion, a distorted worldview perhaps based on a bizarre upbringing. It's not that he doesn't distinguish between good and evil; it's that he often doesn't clearly recognize which is which.

He professes to be a Christian, yet his behavior screams otherwise. Even if he actually is a Christian, he undeniably has a nostalgic attraction and sympathy for Islam, which, among other things, obscures his grasp of the enormity of the threat the world faces from Islamists.

His approach to combating Islamic terrorism is first to downplay its existence and pervasiveness. Beyond that, it is obvious he rejects the idea that there is anything inherent to Islam that leads to radicalism and violence.

New Obama administration rules make the vast majority of illegal immigrants immune to arrest and relegate border patrol agents to the role of social workers, according to Breitbart Texas.

A border agent leaked the documents to the conservative web site, explaining that the Department of Homeland Security has decided that the majority of immigrants crossing U.S. borders illegally cannot be detained or deported without approval from top officials in Washington.

The documents do not specifically order agents to let illegal immigrants pass freely into the United States, the source said. But the rules “clearly” say “don’t waste your time because the alien will not be put into detention, sent back or deported,” he said.

“There is literally no reason to arrest an illegal alien because they are specifically telling Border Patrol there will be no consequence for the illegal alien. It is a waste of time and resources to arrest someone who is off limits for detainment or deportation and the documents make that fact clear,” the source added.

“Border Patrol agents are now being trained to be social workers, not law enforcement.”

The training documents create three categories of illegal immigrants. “Priority one” includes those who “pose a threat to national security, border security or public safety.” “Priority two” would comprise those guilty of misdemeanors or “new immigration” violations. “Priority three” are simply described as “other immigration violators.”

The new rules follow a Nov. 20 directive from Homeland Security Secretary Jeh Johnson, who ordered agents to arrest only immigrants they see crossing the border or those who are wanted criminals or convicted felons.

“This is not how it was before,” the source told Breitbart. “Border Patrol used to arrest, process, and turn the illegal alien over to Immigration and Customs Enforcement and the courts. Under this new program, the majority of illegal aliens will be released directly from the Border Patrol with no appointments or expectation that they ever have to show up for a hearing.”

Pamela Geller, Breitbart: The Death of the Jews of France

The Jews are being ethnically cleansed from France – 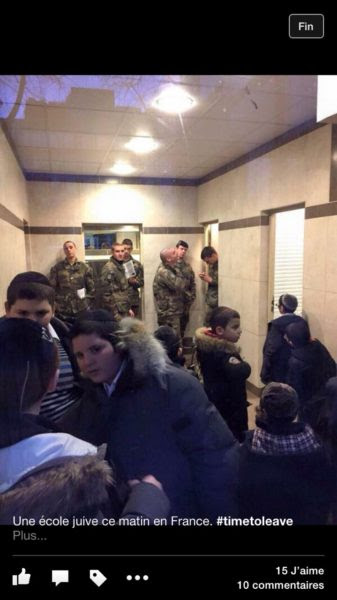 In the wake of the slaughter of four Jews in a Paris kosher supermarket by an Islamic jihadist, a Parisian Jew said:

“In the past year, 7,000 Jews have already left France and after this there will be many thousands more. We are not safe in France any more. There is no future for Jews here in France. We are finished in France.”

Europe loves to memorialize dead Jews, even to the point of fetishizing them – it’s live ones that they cannot tolerate. The idea that French President Francois Hollande did not want Israeli Prime Minister Binyamin Netanyahu at a memorial march for Jews...

This Paris march was more show than substance, and severely compromised any message it might have had by including jihad leader Mahmoud Abbas, but Obama’s absence was glaring.

“Too little too late? Kerry says he WILL go to Paris but only after U.S. was shamed for snubbing historic weekend rally of world leaders,” by Simon Tomlinson and Francesca Chambers, Daily Mail, January 12, 2015:


U.S. Secretary of State John Kerry said he will now travel to Paris after the U.S. government was shamed for not joining a rally yesterday for victims of the French terror attacks.

The rally was attended by 40 world leaders, including British Prime Minister David Cameron and Israeli PM Benjamin Netanyahu, and a million people.

A staggering 3.7 million people gathered across France today to stage further defiant marches in a moving tribute to the 17 people killed in hostage sieges last week.

Kerry said at a news conference that U.S. officials had been ‘deeply engaged’ with French authorities almost immediately after the first attack occurred and had offered intelligence assistance.

Email ThisBlogThis!Share to TwitterShare to FacebookShare to Pinterest
Sometimes one photo can say it all... 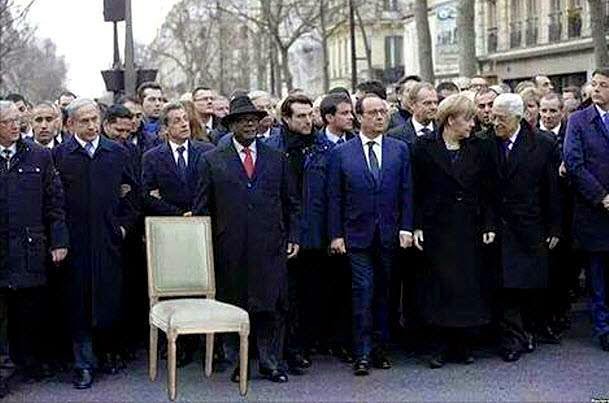 The headline reads: “All is Forgiven”

Heavy  Charlie Hebdo’s first issue since the massacre of January 7, when 10 of its staff were killed by Islamic terrorists, will feature the Prophet Muhammad holding a placard saying “Je Suis Charlie.” In the background, the phrase “Tout Est Pardonne” is written, that’s French for “All is forgiven.” The issue will be released on January 15, reports the AFP. The magazine usually prints 60,000 copies, this week three million will flood the market.

Where can I buy Charlie Hebdo issues and subscriptions?