I’ve posted hundreds of charts over the past several years, including on favorite topics such as tax code corruption and counterproductive government spending.

But arguably the most powerful and compelling chart I’ve ever shared is on the topic of education.

Prepared by my Cato colleague, Andrew Coulson, it shows that massive increases in spending and bureaucracy (which accompanied increasing federal involvement and intervention) have had zero impact on educational performance.

Keep that chart in the back of your mind as we consider what George Will has to say about President Obama’s scheme – known as Common Core – to expand federal involvement and intervention.

We have several excerpts, beginning with this passage outlining some of his concerns.


Common Core…is the thin end of an enormous wedge. It is designed to advance in primary and secondary education the general progressive agenda of centralization and uniformity. …proponents of the Common Core want its nature and purpose to remain as cloudy as possible for as long as possible. Hence they say it is a “state-led,” “voluntary” initiative to merely guide education with “standards” that are neither written nor approved nor mandated by Washington… Proponents talk warily when describing it because a candid characterization would reveal yet another Obama administration indifference to legality.

Will then notes that we’ve been sliding down the slippery slope of centralization and Washington control.


The 1965 Elementary and Secondary Education Act (ESEA), the original federal intrusion into this state and local responsibility, said “nothing in this act” shall authorize any federal official to “mandate, direct, or control” schools’ curriculums. The 1970 General Education Provisions Act stipulates that “no provision of any applicable program shall be construed to authorize any” federal agency or official “to exercise any direction, supervision, or control over the curriculum, program of instruction” or selection of “instructional materials by any” school system. The 1979 law creating the Education Department forbids it from exercising “any direction, supervision, or control over the curriculum” or “program of instruction” of any school system.

And Common Core is just the latest example.


…what begins with mere national standards must breed ineluctable pressure to standardize educational content. Targets, metrics, guidelines and curriculum models all induce conformity in instructional materials. Washington already is encouraging the alignment of the GED, SAT and ACT tests with the Common Core. By a feedback loop, these tests will beget more curriculum conformity. All of this will take a toll on parental empowerment, and none of this will escape the politicization of learning like that already rampant in higher education.

If this sounds familiar, it’s probably because you’re aware of other slippery slope examples, such as the tiny income tax in 1913 that has morphed into the internal revenue code monstrosity of today.

Returning to the topic of education, Will warns that the one-size-fits-all approach will undermine the innovation and experimentation needed to figure out how best teach kids.


Even satisfactory national standards must extinguish federalism’s creativity: At any time, it is more likely there will be half a dozen innovative governors than one creative federal education bureaucracy. And the mistakes made by top-down federal reforms are continental mistakes.

I particularly like his warning about “continental” mistakes. You get the same problem with global regulation, by the way.

The bottom line, as Will explains, is that Common Core is yet another example of a failed approach.


What is ludicrous is Common Core proponents disdaining concerns related to this fact: Fifty years of increasing Washington input into K-12 education has coincided with disappointing cognitive outputs from schools. Is it eccentric that it is imprudent to apply to K-12 education the federal touch that has given us HealthCare.gov? …Opposition to the Common Core is surging because Washington, hoping to mollify opponents, is saying, in effect: “If you like your local control of education, you can keep it. Period.”

You won’t be surprised to learn that Cato Institute experts are among the leading opponents of Common Core. Here’s what Andrew Coulson, in a column warning about the negative impact on private schools, has written.


…the Common Core–aligned tests create a powerful incentive for schools to teach the same concepts in the same order at the same time. This would make it all but impossible for schools to experiment with new ways of tailoring education to meet the needs of individual children — they will instead have to resort to expecting that all children who happened to be born in the same year progress at the same rate across subjects.

And another Cato scholar, Neil McCluskey, points out that other education experts also think Common Core is a dud.


The Common Core is opposed by scholars at leading think tanks on the right and the left, including the Heritage Foundation, the Hoover Institution, the Brookings Institution and the Cato Institute. My research has shown that there is essentially no meaningful evidence that national standards lead to superior educational outcomes. Hoover Institution Senior Fellow Eric Hanushek, an education economist and supporter of standards-based education reform, has reached a similar conclusion, recently writing: “We currently have very different standards across states, and experience from the states provides little support for the argument that simply declaring more clearly what we want children to learn will have much impact.” Hanushek’s conclusion dovetails nicely with Common Core opposition from Tom Loveless, a scholar at the left-leaning Brookings Institution. In 2012, Loveless demonstrated that moving to national standards would have little, if any, positive effect because the performance of states has very little connection to the rigor or quality of their standards, and there is much greater achievement variation within states than among them. In fact, Loveless has been one of the clearest voices saying the Core is not a panacea for America’s education woes, writing: “Don’t let the ferocity of the oncoming debate fool you. The empirical evidence suggests that the Common Core will have little effect on American students’ achievement. The nation will have to look elsewhere for ways to improve its schools.”

We started this post with a very powerful chart, so let’s end with another chart.

It’s not as visually compelling, but it shows that the United States already spends more on education than another other nation.

But if you look at the data is this post, you’ll see that American students are lagging behind their counterparts in other developed nations.

Maybe, just maybe, it’s time to put kids first. Perhaps we should discard the Bush-Obama approach of centralization and spending and instead choose a better path.

In other words, let’s learn from Chile, Sweden, and the Netherlands.
Posted by Diane Sori at 9:19 AM No comments:

Mirror, Mirror, on the Wall, Which Nation Has Increased Welfare Spending the Fastest of All?

There’s an old joke about two guys camping in the woods, when suddenly they see a hungry bear charging over a hill in their direction. One of the guys starts lacing up his sneakers and his friend says, “What are you doing? You can’t outrun a bear.” The other guys says, I don’t have to outrun the bear, I just need to outrun you.”

That’s reasonably amusing, but it also provides some insight into national competitiveness. In the battle for jobs and investments, nations can change policy to impact their attractiveness, but they also can gain ground or lose ground because of what happens in other nations.

Courtesy of a report in the UK-based Telegraph, here’s another example of how relative policy changes can impact growth and competitiveness.

The paper looks at changes in the burden of welfare spending over the past 14 years. The story understandably focuses on how the United Kingdom is faring compared to other European nations.

Welfare spending in Britain has increased faster than almost any other country in Europe since 2000, new figures show. The cost of unemployment benefits, housing support and pensions as share of the economy has increased by more than a quarter over the past thirteen years – growing at a faster rate than in most of the developed world. Spending has gone up from 18.6 per cent of GDP to 23.7 per cent of GDP – an increase of 27 per cent, according to figures from the OECD, the club of most developed nations. By contrast, the average increase in welfare spending in the OECD was 16 per cent.

This map from the story shows how welfare spending has changed in various nations, with darker colors indicating a bigger expansion in the welfare state. American readers, however, may be more interested in this excerpt.


In the developed world, only the United States and the stricken eurozone states of Ireland, Portugal and Spain – which are blighted by high unemployment – have increased spending quicker than Britain.

Here’s another map, but I’ve included North America and pulled out the figures for the countries that suffered the biggest increases in welfare spending. As you can see, only Ireland and Portugal were more profligate than the United States.

Needless to say, this is not a good sign for the United States.

But the situation is not hopeless. The aforementioned numbers simply tell us the rate of change in welfare spending. But that doesn’t tell us whether countries have big welfare states or small welfare states.

That’s why I also pulled out the numbers showing the current burden of welfare spending – measured as a share of economic output – for countries in North America and Western Europe.

This data is more favorable to the United States. As you can see, America still has one of the lowest overall levels of welfare spending among developed nations.

Ireland also is in a decent position, so the real lesson of the data is that the United States and Ireland must have been in relatively strong shape back in 2000, but the trend over the past 14 years has been very bad.

It’s also no surprise that France is the most profligate of all developed countries.

Let’s close by seeing if any nations have been good performers. The Telegraph does note that Germany has done a good job of restraining spending. The story even gives a version of Mitchell’s Golden Rule by noting that good policy happens when spending grows slower than private output.


Over the thirteen years from 2000, Germany has cut welfare spending as a share of GDP by 1.5 per cent… Such reductions are possible by increasing welfare bills at a lower rate than growth in the economy.

But the more important question is whether there are nations that get good scores in both categories.

In other words, have they controlled spending since 2000 while also having a comparatively low burden of welfare outlays? 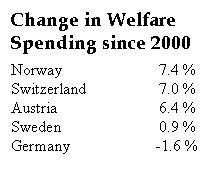 Here are the five nations with the smallest increases in welfare spending since 2000. You can see that Germany had the best relative performance, but you’ll notice from the previous table that Germany is not on the list of five nations with the smallest overall welfare burdens. Indeed, German welfare spending consumes 26.2 percent of GDP, so Germany still has a long way to go.

The nation that does show up on both lists for frugality is Switzerland. Spending has grown relatively slowly since 2000 and the Swiss also have the third-lowest overall burdens of welfare spending.

Hmmm…makes you wonder if this is another sign that Switzerland’s “debt brake” spending cap is a policy to emulate.

By the way, Canada deserves honorable mention. It has the second-lowest overall burden of welfare spending, and it had the sixth-best performance in controlling spending since 2000. Welfare outlays in our northern neighbor grew by 10 percent since 2000, barely one-fourth as fast as the American increase during the reckless Bush-Obama years.

No wonder Canada is now much higher than the United States in measures of economic freedom.
Posted by Diane Sori at 9:13 AM No comments: