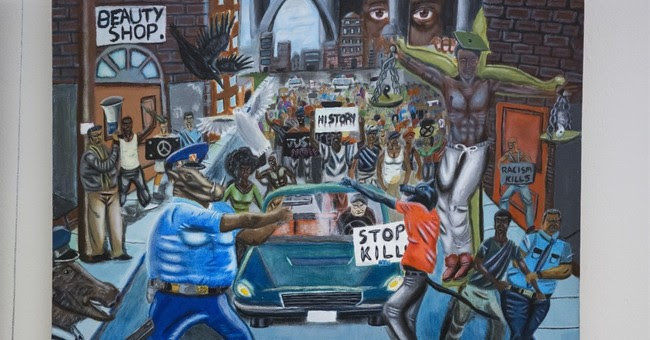 WASHINGTON (AP) — A GOP congressman reported Friday that a painting stirring controversy on Capitol Hill will be taken down Tuesday after the agency responsible for maintaining the Capitol complex determined it violated rules for a student arts competition.

The painting depicts Ferguson, Missouri, with a pig in a police uniform aiming a gun at a protester. The painting was among hundreds completed by high school students that are featured in a tunnel leading to the Capitol.

Rep. Dave Reichert, R-Wash., complained the painting violated rules for the competition, which state that works depicting subjects of contemporary political controversy or of a sensationalistic or gruesome nature are not allowed. Speaker Paul Ryan informed Reichert on Friday that the architect of the Capitol has determined the painting violated the rules and will come down, his office reported.

Reichert said in a written statement that the painting was a "slap in the face to the countless men and women who put their lives on the line everyday on behalf of our safety and freedom."

The painting by David Pulphus won an annual arts competition in Democratic Rep. William Lacy Clay's congressional district last year. Clay and lawmakers supporting the painting's display said it hung for more than six months without controversy. They said things changed only after conservative media outlets began a campaign to have the artwork removed.

Sen. Ted Cruz (R-TX) and Rep. Mario Diaz-Balart (R-FL) have introduced a bill to ask the Secretary of State to designate the Muslim Brotherhood as an international terrorist organization. It is high time that the Muslim Brotherhood (MB) be officially designated a terrorist organization, as a beginning process in weeding out MB affiliates (both individuals […]

Email ThisBlogThis!Share to TwitterShare to FacebookShare to Pinterest
Obama Administration Arming the Taliban Enemy in Afghanistan

Obama declared that the vicious bloodthirsty Taliban were to be his partners in peace. But of course, they were having none of it. They are on the vanguard of the tsunami of Islamic supremacist movements that Obama empowered, armed and supported. Their resurrection, after Bush decimated them, is Obama’s legacy.

The U.S. State Department reported that in the last 10 years, under President Obama’s watch – after the United States invaded and ousted the Taliban from leadership – religious freedom has plunged and every single Christian church has been removed from the country.

Obama laid down our weapons (even though he campaigned on fighting in Afghanistan, “the good war”) and as a result, the Taliban control large parts of Afghanistan. Bill Roggio, the editor of The Long War Journal, reports that one-fifth of the country is controlled or contested by the Taliban, but he emphasized that this was a conservative estimate. “They probably either control or heavily influence about a half of the country,” he said.

I submit that Afghanistan is one of Obama’s top failures (or perhaps in his mind, his greatest success). And there are a great many failures competing for the top spot — Syria, Iraq, Libya, Russia, Israel, Egypt, ISIS, jihad at home …..

Email ThisBlogThis!Share to TwitterShare to FacebookShare to Pinterest
Just a Thought...
On Rep. John Lewis
By: Diane Sori / The Patriot Factor

So Rep. John Lewis (Ga)....a 30-year career Congressman...is NOT going to attend Donald Trump's inauguration...and is urging his fellow Democrats NOT to attend as well...because he claims Trump is NOT a "legitimate president" and NOT fit to serve.

And pray tell was Obama legitimate and fit to serve when he, a mere community organizer and Senator who voted 'present' more times than he cast a vote...was that man fit to serve...I think NOT and proof of that can be seen by both his failed domestic and foreign policies.


“You cannot be at home with something that you feel that is wrong, is not right," Lewis said but I say 'get over it, Hillary lost, the free ride is over, time to move on.'

And for the man who claims to be a champion of black civil rights...for the man whose predominately black district is a total and complete unabashed mess...to say such words when the man he worships has set race relations back generations...he, Rep. John Lewis, is the biggest hypocrite of all.
Posted by Diane Sori at 9:35 AM No comments:

For those who missed last night's RIGHT SIDE PATRIOTS broadcast where Craig and Diane discussed 'Fake News' fallout, last week's 'incident' at Ft. Lauderdale-Hollywood International Airport, and gave a fond and oh so snarky farewell to Obama, it will be rebroadcast tonight at midnight on American Political Radio at: http://tunein.com/radio/American-Political-Radio-s273246/

Or you can listen to it on the cloud at: https://soundcloud.com/…/right-side-patriots-january-13-2017
Posted by Diane Sori at 12:07 AM No comments: